For each of the past three seasons, a team title at the Spartan Invitational was something North Allegheny always brought back on its lone road trip to Ohio.

This year’s journey to Boardman resulted in another championship for John Neff’s Tigers, although it didn’t come from his talent-rich boys’ squad. With Madeleine Davison running against the clock, the North Allegheny girls grabbed the Division I title, while the boys rested four of their top seven and traded a Boardman title defense for possible larger prizes come November. 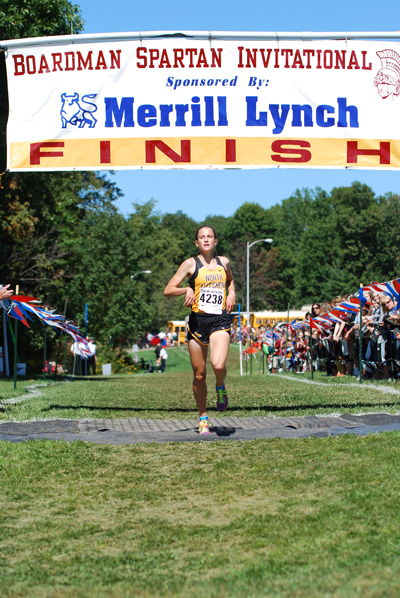 The field in the Division I girls’ race appeared to be settling into a rhythm when North Allegheny’s Davison decided to shake things up a bit … well, actually a lot.

Moments after she reached the front of the nearly 300-runner pack, the sophomore kicked up the intensity and the speed on a lengthy straightaway. Nobody knew it at the time, but the race was now for second place.

“She’s got the leg speed that she can handle it, she showed that in track,” Neff said of Davison’s ability to quickly put distance on the competition. “You just have to be careful against her.

“She’ll open up a gap, and you think she might come back and she’s not going to. I have to take my hat off to her. She was awesome today.”

Acknowledging that it was a plus to have a familiar face in Hampton’s Gina Alm near the front in the early going, Davison pulled away from Alm and early leader Alexis Szivan of Amherst Steele after covering the opening mile in 5:43.

“I just kind of surged around the corner, and then I was suddenly like all by myself,” the sophomore said. “I was a little nervous then because I really didn’t know what to do.”

It surely didn’t look that way to her competitors or the spectators lining the double-loop course as Davison suddenly was all alone with an ever-widening lead. She looked back with less than a mile to go but found nobody close enough to stop her from claiming her first invitational title.

“She’s a coach’s dream to have on the team,” Neff said. “She does everything to the letter. She will do exactly what you ask. She gives you her opinion when she has it, but she’s never disagreeable, just a super great kid. She knows you have to do all of the little things to succeed here, and she’s willing to do them.”

“I saw my time at the 4K, and I didn’t really know what that meant because I don’t usually go by the kilometers,” Davison said of her performance. “I wasn’t sure how fast I was running, but I was really happy with the time.”

With Davison in front, North Allegheny’s girls returned to the winner’s circle after claiming the top prize in 2010. The rest of the scorers for the Tigers – seniors Katie Guarnaccia, Caroline Bojarski and Caroline Cwalina, and junior Erin Keelan – were only separated by 13 seconds as they topped runner-up Nordonia by 31 points.

Having the opportunity to run against top teams from the Buckeye state is worthy of a special place on the North Allegheny schedule. However, an extravaganza attracting more than 5,000 runners doesn’t quite measure up to an affair on the first Saturday in November in Chocolatetown, USA.

“We’ve sort of had this in mind from the beginning,” Neff said of holding would-be varsity runners out of meets during the 2013 season. “We want to come over here because we love coming here, and we wanted to give some of the guys the chance to run here and run in an unfamiliar environment and on something that’s like a flat 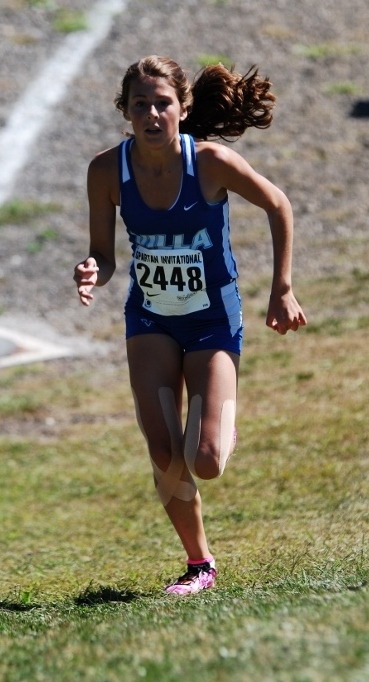 Healthy scratches from North Allegheny’s roster Saturday were senior Cordon Louco, junior Hunter Wharrey, senior Nicholas McClure and junior Peter Savchik. Those four were Nos. 2, 5, 6 and 7 in a North Allegheny lineup that overwhelmed the competition at the Red, White & Blue Classic with a 1-7 spread of just 42 seconds.

Junior Matt McGoey was eighth in 16:00.2, while classmates Seamus Love and Scott Seel were 15th and 16th overall in 16:25.6 and 16:27.6, respectively, as the Tigers were the first team to put three runners across the finish line. With four standouts taking the day off, North Allegheny could not hold off the field as Olentangy Liberty claimed the Division I title with 111 points to 147 for host Boardman and 150 each for Louisville and the Tigers.

While Neff admitted that it was a difficult decision to put his team’s event winning streak at greater risk against several of Ohio’s top ranked Division I teams, he said resting some of his top runners was the right choice in the long run.

“Winning the Boardman Invitational is a big accomplishment, and hats off to Olentangy Liberty. But winning a state meet is more important,” he said.

Another team with a future in-state meet on its mind was Villa Maria Academy, which headed west as Pennsylvania’s preseason #2 in Class AA. They were up against the top Division II teams in Ohio in Akron St. Vincent-St. Mary and Bay.

After a hard week of training, the Victors were no match for the Ohioans. St. Vincent-St. Mary and Bay each had three runners in the top 10, finishing with 44 and 58 points, respectively. Woodridge was next with 114, while Villa Maria had 121 for fourth.

“We knew coming in that these teams are always so good, but we are running in the Foundation meet next weekend so this week we actually had a really tough week,” coach Therese Brown said. “I kind of pushed them hard. As much as we would like to do well here, we really have to focus on PA sooner or later.

“It is such a great opportunity, and these Ohio teams are good. It’s good for (our team) to see teams like Akron St. Vincent-St. Mary. To run like a pack like that is huge.”

As she did a year ago, Bernadette Prichard led Villa Maria, finishing fifth in 19:26.5 behind a pair of runners from the top two teams. As a freshman in 2012, Prichard was the race winner.

“She’s grown a lot,” Brown said of Prichard. “She hasn’t had any interruptions in training.”

PHOTOS AND SUMMARY BY PHIL GROVE

SUMMARY: Madeleine Davison’s runaway victory powered North Allegheny to the top spot in the Division I girls’ race Saturday at the Spartan Invitational. 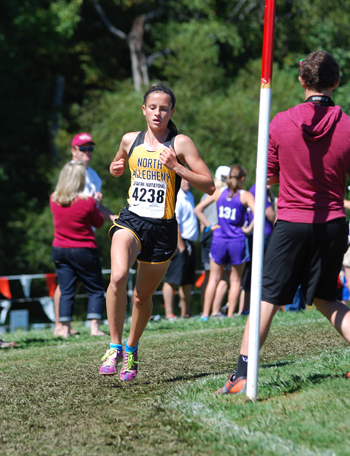 Just a sophomore, Davison pulled away from fellow western Pennsylvanian Gina Alm of Hampton and Alexis Szivan of Amherst (OH) Steele shortly after the mile mark. The North Allegheny standout put the race away during mile No. 2, crossing the line first in 18:22.6 and more than a minute ahead of Szivan in second. The Tigers topped the 34-team field with 115 points, with Nordonia second with 146.

In the boys’ race, North Allegheny rested at least three of its top seven runners from the roster that dominated the Red, White & Blue Classic and saw its streak of consecutive titles in the Ohio invitational end at three. Olentangy Liberty was one of about a half dozen ranked Ohio teams in the meet and claimed the Division I title with 111 points, with host Boardman at 147 and Louisville and North Allegheny at 150.

Matt McGoey led the Tigers in eighth, while Seamus Love was 15th and Scott Seel 16th.

The Division I boys’ race provided the meet highlight as Mark Hadley of Boardman and 2012 Foot Locker finalist Nick Elswick of Chardon obliterated an 18-year-old meet record by more than 20 seconds in running two of the nation’s top times this season. Hadley won in 15:07.8, with Elswick nine-tenths of a second behind. Both runners also shattered the old course record of 15:30 set in 1992.

In Division II, PA#2 Class AA Villa Maria Academy finished a solid fourth in a girls’ field that featured the top two teams in Ohio’s middle of three divisions. Sophomore Bernadette Prichard, who won at Boardman a year ago, was fifth in 19:26.5 to lead the Victors.

Cathedral Prep’s Pat Kloecker was the top Pennsylvania finisher in the boys’ race, placing seventh in 17:02.

Full Coverage of the 9/14 weekend