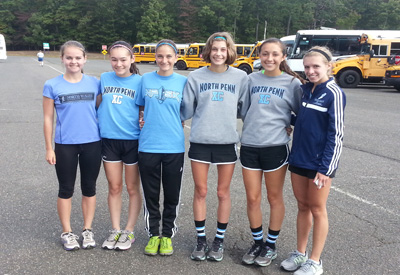 Two of District 1's state qualifying contenders looked for a change of pace in their season and a positive boost to get them back into form.

North Penn has struggled with their big rivals and recent bogey squad Central Bucks East. In 3 appearances against the Patriots, North Penn have been 2nd best on each occassion. The Six Flags invitational is a new tradition for the sky blues and Saturday was a great opportunity for them to win a team title at the cross country festival for the first time. 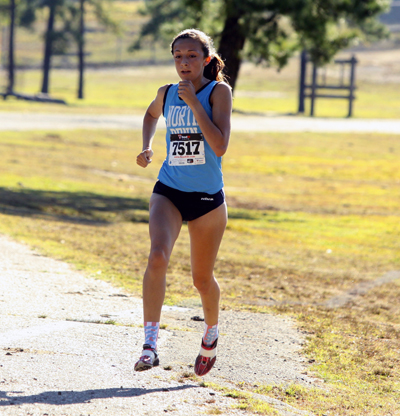 North Penn has had a solid front three this season and Saturday was no different. Ali Valenti (in photo by Patty Morgan) hung on with the lead runner from the mile mark and did all she could to keep pace. In the end, she earned a 2nd place finish in 18:47. Brianna Mengini pushed for 4th place in 19: 04 and Phoebe Clowser wrapped up three North Penn finishers in the top 6 with her 6th place performance of 19:16. Running like a team in the front three is something the team hopes will help them push forward in the 2nd half of the season.

"If we're going to qualify for states, we have to run together as a team, "said senior Phoebe Clowser. "The other contenders have very talented girls and we need to rise to the challenge that they will be presenting."

Part of that team togetherness is having the 4th and 5th runners finish off the hard work of the front 3. Jenna Reimer was the 4th finisher for North Penn (18th overall) and Colleen McGovern wrapped up the team scoring with a 27th place finish. North Penn had their five scorers finish within 89 seconds of one another and that was enough to win the team title with 58 points and win by 7. This was the first time North Penn had won a team title at the Six Flags Invitational. Their best finish prior to Saturday was a 3rd place finish in 2012.

McGovern admitted that as nice as the win was, they have one eye on the big dual meet with CB East on Wednesday.

"CB East has a lot of really good girls," said the senior. "They've been tough for us to beat this season, but hopefully we can close the gap a little bit as we get closer to districts."

CB East will be one of the teams North Penn will be going head to head against for one of the five district 1 AAA state qualifying spots. Another squad that will be in the mix with them will be Strath Haven.

Strath Haven were a long shot in 2012 to make the state championship finals in Hershey, only to find a way to put it all together and snag the final team spot. With four members of that state team back, confidence is high for the Delaware County squad. 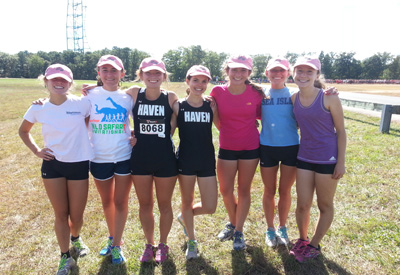 Making their first appearace to Six Flags, Strath Haven were looking for something different compared to the demanding Hershey course they faced at the PIAA Foundation Race last week. Some of the runners found the course a little tougher than advertised.

"There were more hills on this course that we thought there would be," shared the varsity team. "The hills also had some soft sand mixed in with the dirt terrain, making the hills an even tougher challenge. That and the increasing heat and sun as the race progressed made it a tougher course." 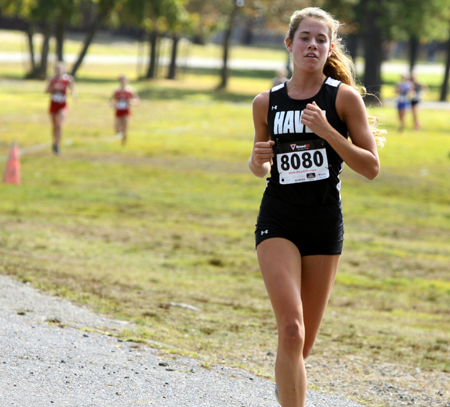 Despite that, Strath Haven went out aggressively on the flat and looping opening mile to pretty solid effect. The squad earned a solid 2nd place finish with 73 points, just missing out on the team title by 15. Abby Kennedy (in photo by Patty Morgan)  was the lone runner for Strath Haven to break up the foursome of team champions Tappan Zee. Kennedy ran 19:49 to finish 8th. Maia Mesyngier finished 12th with Sam Snyder, Claire Wolters and Sara Peeleman also earned top 20 finishes and the top five finished 58 seconds apart when it was said and done.

The Six Flags race was a tune up for next week's Paul Short Run, a meet with high importance for the Panthers. With four seniors on the sqaud, Strath Haven hope that experience will prevail over younger talented teams.
Six Flags Wild Safari Invitational - Boys 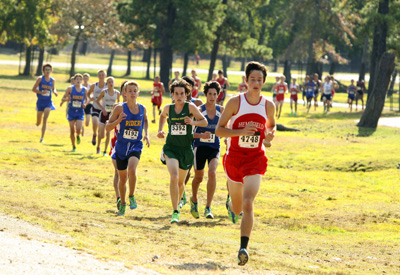