During the past year, many of the top distance runners in Pennsylvania tried – with little success – to break up Fox Chapel Area’s front-running tandem of Colin and Ethan Martin. 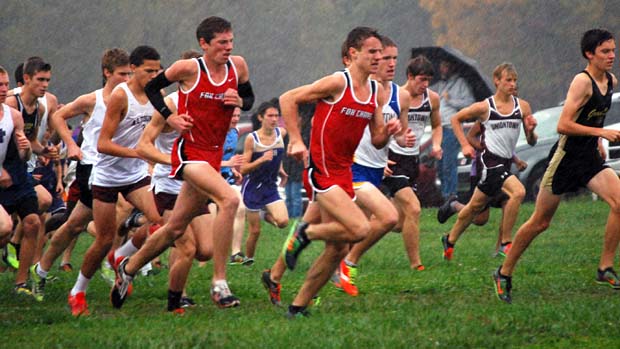 What the competition attempted to do, the college recruiting process almost accomplished. However, without relying on any final kick, the twin brothers finished together again, with both verbally committing last week to continue their careers at the University of Michigan.

“Pretty much every visit after (Michigan), it was hard to beat it,” Ethan said. “We were very biased.”

The Martins visited the Ann Arbor campus after Colin was victorious and Ethan placed third in the Red, White & Blue Classic on Sept. 7 in Pittsburgh’s Schenley Park. Due in large part to the college recruiting process, the brothers have had a light schedule this fall, competing in just three “big” meets after compiling one of the top distance resumes in the state a year ago.

Starting with the 2012 WPIAL (District 7) cross country meet, the Martins were leading or in the lead pack of all of the marquee competitions. A second (Ethan) and fifth (Colin) at Cooper’s Lake was followed by Ethan taking fifth and Colin 16th in the Class AAA race in Hershey.

The brothers also had official visits at Penn, Virginia and Syracuse and were considering their options for a fifth and final official visit when it became clear it wasn’t going to matter.

“Just the college town feel,” Colin said of one reason for his decision to wear maize and blue. “It’s a huge, huge university. I was looking to go to a big school and experience what life is like on my own. I feel Ann Arbor is a good fit.

“I knew every school was excellent academically. I knew we were not sacrificing anything.”