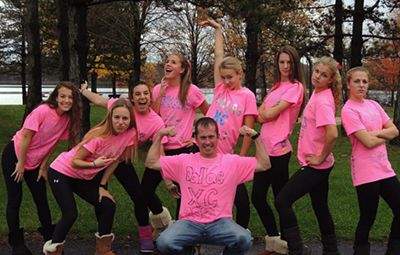 I hope everyone had a great time at the state meet this weekend and are enjoying your time off now or getting prepared for regionals!

On Friday my team and I made our way down to Hershey, with our whole girl’s team and four of our boys who qualified.  On Friday we ran at a park and then went over to the course.  Our fifth, sixth, and seventh runners had never raced the course before so we made sure we went over the course very carefully.  After a quick dinner and meeting it was right to bed (well after a quick episode of Fashion Police of course!) 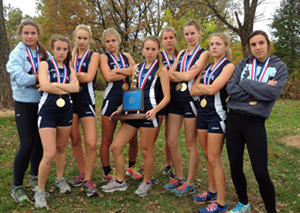 When the morning of states arrived I could not believe it was already here, plus the day of my last state championship had arrived which was sad.  My teammates and I were all very nervous on the ride over because we all wanted this so badly.  When we got to the course we got to see our best friend and former teammate Allison Grose, she definitely eased our nerves and it was so awesome to have her there.  Walking down to the line we were all nervous, after losing by such a small amount last year we all knew that anything could happen. 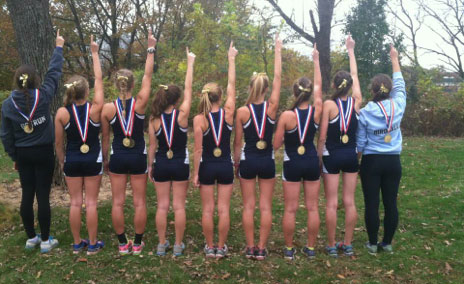 The gun went off and all of my teammates and I got out great, which eased my nerves about one of them falling or not getting out.  I moved into second at the mile and just stayed there the rest of the race.  After taking so much time off this season the hills certainly got the best of me!  In big races like this I always hate the fact that I am not sure how my teammates are doing, so my mom and coach made sure to tell me exactly how they were doing and they told me the girls were doing awesome! 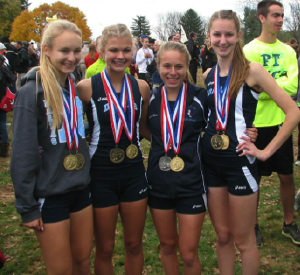 Immediately after I finished I turned around and waited to see my teammates and then they all appeared at once and they placed 14th, 15th, 16th! They had all medaled and ran in the 19:40’s, we were so thrilled and I knew between the four of us we had probably only scored around 20 points. Our fifth came in under twenty-two minutes and then our sixth and seventh came in right behind.   Michael Murphy, the NEB coach, gave us the news that we were ahead by over 50 points at the two mile.  Our positions had not changed much in the last mile so I had a good feeling.  I was so nervous for the ten minutes we had to wait for the results.  I was walking over to our tent and I saw my teammates all in a huddle crying and then they told me we had won!  When I found out we had won I just started screaming, I am pretty sure I screamed for five minutes straight!  We were crying and hugging each other, all of our hard work had paid off! 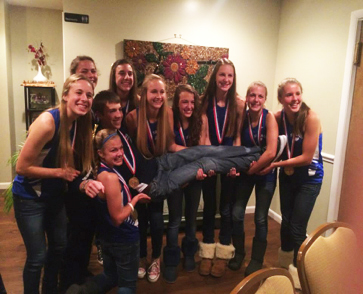 Winning states with my best friends after working so hard was the most incredible thing ever!  The next race up for us was the AA boys’ race where our four boys were racing.  Watching my teammate, Dominic Deluca, win states was so great, he deserved it after working so hard this season!  Our next three boys didn’t do as well as they wanted, but they still all had great seasons and careers.  Two of the boys, Bryce and Travis Mattson, came out for cross country season in seventh grade and you would have never predicted these boys would be running at the state meet.  Through their hard work and dedication these guys have made themselves into great runners, it has been awesome to watch them develop into the runners they are today. 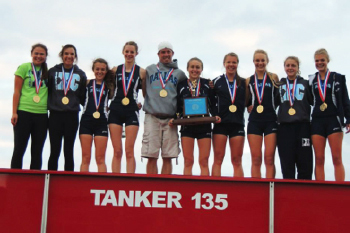 After a ride home of screaming, singing, and laughing we were escorted into town by over fifteen fire trucks and ambulances!  We had a blast and it was so nice to see all the support and recognition we were getting.  We celebrated the rest of the night by going out to dinner and then getting ice cream.  My teammates and I all celebrated my eating lots of junk food since we restricted ourselves during the season.  This week has been amazing so far, our school threw us a pep rally and we have got an abundant amount of congratulations.  It is so nice to feel like you have the whole community right behind you.

As for me I was very pleased with my state race.  I have had such a crazy season and to end it this way made sticking the season out so worth it.  After considerable thought, I am going to do Foot Locker Regionals with a couple of my teammates.  Since I have just started running again I do not really see the point in stopping now.  I am not sure of what kind of shape I can get into in four weeks, but training is going the best it has all season! 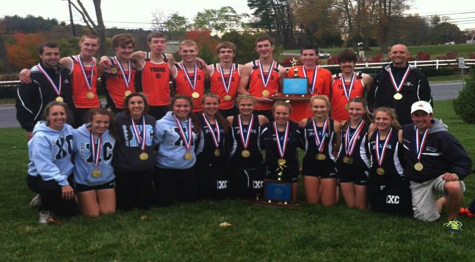 I was overwhelmed by the numerous congratulations I received this weekend from people who truly care about me.  I even heard from an ex-teammate and friend, Jess Adams, who is doing his mission in New Zealand. A special thank you to Wendy and Jake Barrett for all of your love and support this season, it has meant so much to me and Ally.  To my coach for always believing in me and making this such a great season for our team.  And thank you for following through on my bet with you that if we won states you would get a twitter! Follow him @mattsamuel33.  Thanks to our entire school for being so supportive and especially our principal Mr. Shaffer for putting on a pep rally for us.   To my amazing teammates who were my motivation and inspiration to get through this season.

Also congratulations to all the District II runners, as a district we really had a strong showing!

Tunkhannock and Dallas teams! We are from the same conference and both won AA states!!

We had four individual state medalists for the girls! So thankful to have each of these girls in my life, and so proud of each of them for all of their hard work.