Abington Heights senior Tessa Barrett qualified for states in XC as a freshman and sophomore, and after an eye-opening 17:58 at the 2012 Tennett Invitatonal, she looked destined to challange for a state AAA title. But a mud-fest at the District 2 meet led to an injury, and the opportunity was lost. She bounced back in indoor with a solo 10:02 3k in February. Her 3000 at PTFCA champs was an epic battle with Courtney Smith and Regan Rome - one she ultimately won in a state record 9:47.73. She would go on to take 4th at the Penn Relays 3000 in 9:40, and then 2nd (to Smith) in another battle at outdoor states, going 10:25 for 3200 meters. This year she opened with a stunning 17:26 at Cliff Robbins, and then not only won the Gold Race at PIAA Foundation, but set the course record for the Poop-Out Hill layout in 17:48. And then she followed in the recent spike-prints of Neely Spence and Angel Piccirillo, winning the Foot Locker Northeast Regional... then trumping all of the past Foot Locker finalists from PA by winning the championship at storied Balboa Park. 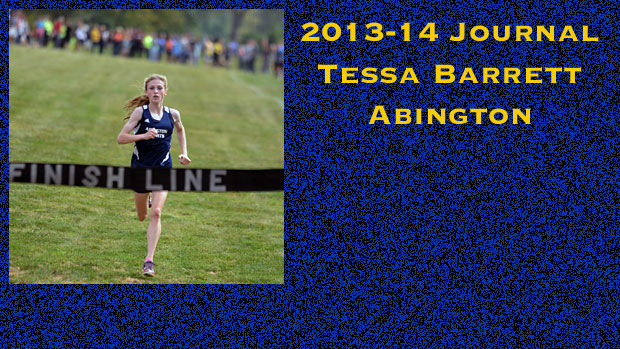 Hey PA runners! I hope everyone enjoyed the holiday season. It's hard to believe Christmas has already come and gone! December sure was busy for me, and was quite a wild ride! While everyone else I know was either resting, starting a different winter sport, or running indoor track at the beginning of December, I was still training for cross country. I felt so incredibly blessed after winning Northeast Regionals and qualifying for Nationals. It was a bit of a new experience training for cross country so late in the year, but definitely, definitely worth it! So I'm going to describe a little bit about what's happened in the last few weeks to me... 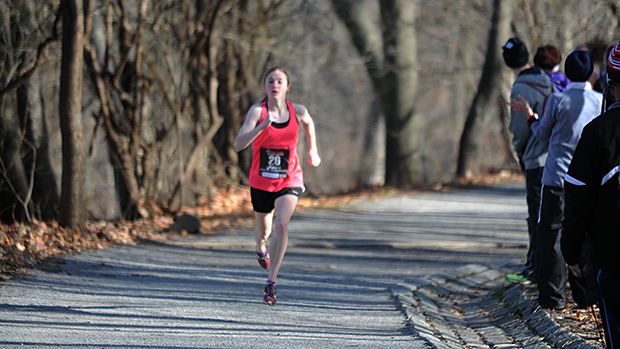 -Going into regionals, I didn't really have much of a training game plan. I was basically doing runs and workouts like I had all season; tempos, fartleks, moderate runs, long runs..pretty basic. The week of regionals, I decided not to taper down too much. I really hate tapering before races, I know how important it is, but for me, it's always the toughest part. So the day after regionals, I had an easy long run, about 9 miles, on hilly roads and trails near my house. The day after that I took off from running and swam in the pool. The rest of the week, I did normal runs and incorporated a little more speed into my workouts, and did Strides at the end of every run. I was feeling really good, and the weather was perfect! The temperature went up to 50 degrees three days that week!

By Monday of the next week, it was taper time. I was so excited to be heading out to sunny San Diego! I had never flown before, so I was a little nervous about going through an airport, going through security and getting on a plane! Luckily, my dad was with me and we navigated our way through JFK pretty well! It also helped that everyone we encountered on our trip was really friendly. We were also on a direct flight. Later that afternoon eastern time, we landed in beautiful San Diego! We boarded a bus at the airport, and headed over to Coronado Island. The Hotel del Coronado was just as beautiful and majestic as it looked from the photographs! It felt surreal! After picking up my Foot Locker uniform and free gear in the lounge, I headed up to my room to unpack and get ready for the afternoon run with the other athletes and the Pros! My roommate was Karen Xiang, from Florida, and she was super sweet! The afternoon run was great, it felt awesome to be running in a T-Shirt and shorts in December. That night, we had a pasta dinner and made T-Shirts. It was really cool getting to know all the other Northeast girls!

The next morning we headed over to Balboa Park at 9AM. After practicing our introductions and meeting our team Captains, Julie Culley and Alysia Montano, we jogged the course. I liked the design of the course, it was a mix of grass, loose dirt, and asphalt, and there were a few uphills and also a few downhills, along with a great deal of turns. After the course review, we headed back to the hotel for some down time before the dinner and athlete Q and A later that evening. The dinner was really interesting, I loved hearing the Elite athletes motivational tips and advice! I felt so honored and humbled to be around such talented runners. 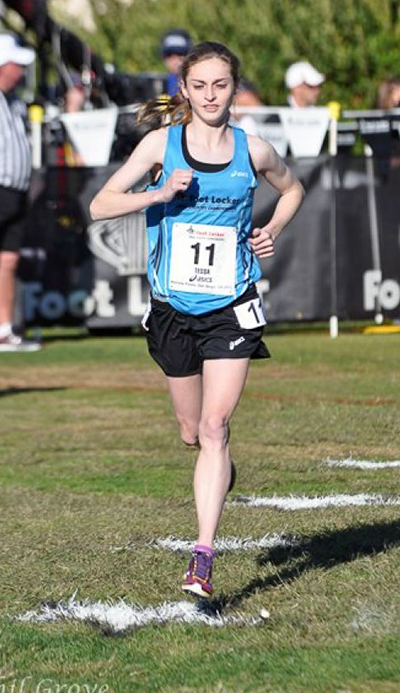 The next morning, I woke up at 5:30 AM to do a shakeout run in the parking lot at the Del. Then, all of the athletes had breakfast in one of the beautiful ballrooms before heading out to the course. When we arrived at Balboa Park for the second time, it felt so different. There were cameras everywhere, and it felt like such a professional event! I had never experienced anything like it before! It was so cool to be introduced during the strideouts; that was a feeling I will never forget. Then, it was time for the race! The gun went off, and the race went out hard, as I expected. I wanted to hang with the lead pack, and I felt like I was in a good position by the mile mark. I had thought this race over a million times, but I knew that the best time for me to make a move was when I felt strong and ready. 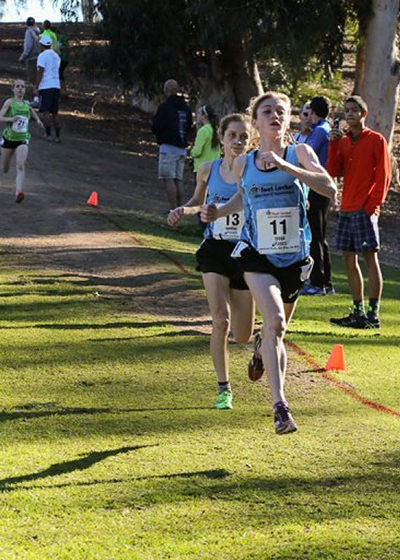 I don't usually have a big race strategy, I just like to go out and run, but I knew that sticking to my pace and working hard on the parts of the course that I felt comfortable on would be important to how I would finish in the race. Coming down the hill on Upas St., I could feel someone sneaking up behind me. I didn't know who it was, but I knew that I had to pick up the pace and work the final hill before the finish. At Foot Locker, it’s anyone's race. I felt really strong going up the final hill, and the adrenaline really started pumping as I crossed the 3 mile mark. I wasn't sure what kind of lead I had, so I kicked it in until the very end because I knew how bad I wanted it. I just kept thinking of all the workouts I had done, not just this year, but in previous years and how long I had been waiting for this. I really could not believe that I had won though, after I crossed the finish line. I was in total and complete shock. Right after I crossed the line, I was shuffled into an interview area and was interviewed by Deena Kastor, one of my idols!! Then, I saw my Dad, Coach and future college coach, Coach Gondak. It was so amazing to be able to share the moment with all of them. Thank you for flying out for the race Coach Gondak and Coach Rob!

I was feeling pretty peppy after the race, so after all the interviews, I went on a nice, relaxing cool down and then took some pictures with the pro runners. Everyone was so nice!!

We all boarded the buses and headed back to the Del. It really hadn’t sunk in yet that I had won the race. It all felt like a dream! San Diego, in my opinion, is the epitome of paradise. Back at the hotel, I just relaxed the rest of the afternoon with my Dad. We did some shopping, and then we went to the hotel’s amazing gym! It’s not very often that you get to workout in a gym with an ocean view, so we took advantage of it! The award dinner that night was fun, and the best part was getting our team medals, way to go Northeast Girls!! J

Footlocker Cross Country Nationals was by far one of the most memorable experiences of my life. It is a truly incredible event! Having the chance to run at Nationals shows how much hard work and dedication during the season really pays off. I want to express a HUGE thank you to all who organize this amazing event, ASICS, the Northeast Coordinators (the Zodda Family!) and to all the elite athletes who came to Footlocker! Also, I want to thank everyone in my community, my team and my coaches for supporting me this season. Finally, I want to thank my family and God!

It’s strange that my high school cross country career is over, but I am so excited for next year to be running as a part of Penn State’s Cross Country Team….WE ARE!!

Training Before Nationals: I averaged around 40-45 miles a week, running 6 days of the week and cross-training on the 7th day. Wednesdays, Fridays and Sundays, I cross-trained in addition to running. Tuesdays and Thursdays, I strength-trained in the weight room. Push ups, pull ups, crunches, burpees, and dumbbell exercises (low weight, high reps). One workout that really stood out for me was a tempo-workout I did about 12 days out from Nationals: 5-6 x 1K repeats on the grass, at a comfortably-hard pace with minimal recovery, followed by hill sprints and four striders. I felt really strong during this workout, and I negative split on the last two repeats.

I also just want to throw this out there: I truly believe the quality time I spent training during the summer really helped me this season. In past years, I was not healthy enough to train during the summer. It’s true when they say a good Summer base is key to a successful season. Have fun in the summer, and make running a part of that fun!