Loading
It has been said more than once that consistency is the mark of a champion.
And judging from his performances in 2014, Max Adams surely would meet any lofty standard of a champion that’s out there.
The Hempfield Area graduate concluded his senior season with a much-anticipated state title in the discus on the strength of one of the nation’s longest throws and also tacked on a PIAA championship in the shot put. For his efforts, he was selected the Gatorade Pennsylvania Boys Track and Field Athlete of the Year.
“It was one of the best feelings in the world to be able to hear them call out a distance that was so close to 200 feet,” Adams said of when his state-leading and T-US#6 effort of 198 feet, 3 inches was measured. “I've never felt such a feeling of relief when I knew I won and had one of the best throws in the country. 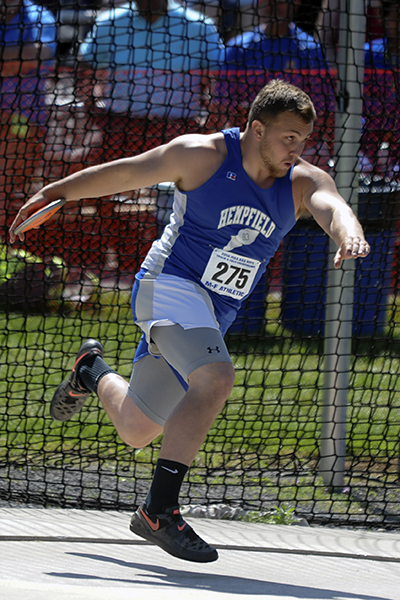 “What really allowed me to compete at such a high level for this year is my technique. Coach (Murray) and I spent hours upon hours trying to perfect my form that ultimately led to my success this year. My strength also helped me to better my throws when I have good technique.”
Hempfield coach Dave Murray said while Adams has always been a “big weight room guy,” the right-hander was a lot stronger in 2014. Murray added that was just one of the factors contributing to Adams’ high level of success this season.
“He was enjoying himself instead of worrying about making mistakes,” Murray said. “When you are having fun doing something, that’s the most important thing for big performances.”
The efforts by Adams in the rings at Shippensburg University were just the final chapters in a season-long story of excellence in both events. By the middle of January, Adams already had hit 59-8.5 with the 12-pound ball as his spin technique was producing big numbers weekly. On March 1 at Penn State, the Hempfield standout wrapped up the first major title of his senior year with a winning toss of 59-1.5 in the PTFCA Indoor State Championship. 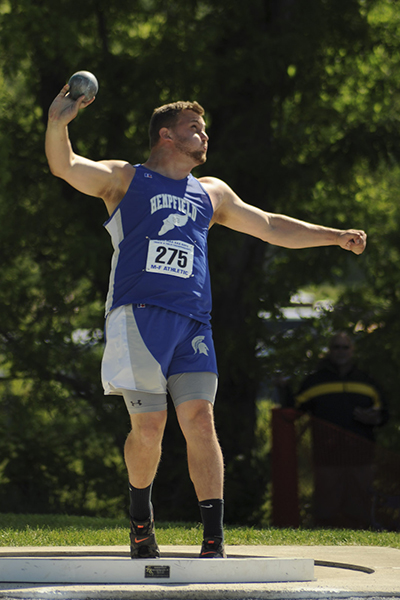 It wasn’t long before he cracked the 60-foot mark outdoors in a big way, moving to No. 2 in the shot in Pennsylvania with a 61-1 toss at his home invitational in April. Another 60-footer for second at the prestigious Baldwin Invitational was just a warm-up as, later in the day, he dominated the discus with three throws over 185 feet and a US top 10 heave of 192-0.
“Consistent and focused,” said Murray, who noted that he witnessed Adams hit 210 feet in practice with the discus. “He didn’t look worried at meets any more.”
A factor that might have contributed to extra nervous energy at times for Adams was trying to keep pace in a throws program that has enjoyed tremendous success in recent years. With his state titles, Adams became the fifth Spartan to be the best in the shot or discus since 2006.
“There was some pressure from past throwers to succeed, but there was more pressure to finally get a state title after not fulfilling my potential the two years before,” said Adams, who was fourth in the discus as a freshman. “I had the capability to have a winning throw at the state meet, but I unfortunately didn't do my best at the past two years’ state meets. So thankfully I finally did it this year.”
Adams was PA’s No. 1 by 11 feet this season in the discus and ranked 40th nationally in the shot put and PA-#2. He won the PIAA gold in the shot by almost 4 feet.
“Max has been a great thrower for all four years,” Murray said. “The difference this year he was much more consistent with saving a big throw and not fouling. He focused on that during practice, and it paid off greatly.”
Adams, who will be competing for Wake Forest next year, thanked his coach for enabling him to reach the top in his events.
“I would like to give all the credit in the world to my coach, Dave Murray,” said the 6-foot-2, 245-pound right-hander, who also finished second in the discus and 10th in the shot at the New Balance Nationals Outdoor. “Without him, I would have never made it to any of the state meets and not be the man that I am today. He is a fantastic coach and person.”
The Gatorade award victory by Adams continues the streak of a thrower claiming top honors for Pennsylvania boys. In 2013, Wilmington Area’s Jon Yohman was honored after winning the state Class AA shot put title and finishing second in the discus, while in 2012, South Park’s Billy Stanley won the award after setting all-time state meet and national federation records in winning the Class AAA javelin at Shippensburg.
Buckeye State Breakdown Featuring Harry Custer Apr 1, 2020
On The Line: Tokyo2020, Florida Relays & More Apr 1, 2020
Coaching Clinic: XC Talk By Sean McCafferty Apr 1, 2020
Antonio Florcruz Apr 1, 2020
An Interview With Pro Coach Gary Evans Apr 1, 2020
Bailey Goggans Apr 1, 2020
Tweets by PennTrackXC