Fourteen years ago, after watching his kids run XC and track and wishing for a consolidated place to compare their times, tell their stories, and have their photos displayed for some recognition of their sport, Don Rich decided to provide this for other athletes, their families, coaches and fans. At first, he would send info to the fledgling Dyestat website, which had started a few years earlier. But in March of 2000, he launched his hobby/passion/vocation, PennTrackXC.com. The site went live with the help of a 2-foot ethernet cord (google it people) plugged into the NY Armory's internet-wired closet just off the historic indoor track.

It didn’t hurt that Don and his wife owned a Philly ad agency that did web design. What better use for a design and programming staff than creating a hobby web site?

Over the years, Don has covered hundreds of meets, thousands of athletes, written hundreds of stories, taken and posted hundreds of thousands of photos to give the athletes participating in our under-covered sport, much-deserved visibility and a place to call their online home. In the process, it became a family affair by pulling his wife Gayle and children, Aaron & Courtney, in to help with coverage, and managing and maintaining the site. (Aaron even served as a part-time national editor for a few years, helping to establish MileSplit as a national brand.)

With accolades from college and HS coaches, parents and athletes, Don has worked 60+ hour weeks covering meets in rain, heat, snow, and even ice (Slippery Rock is called that for a reason). And then, with everyone else going home to relax after meets, he would process the countless results for rankings, photos, and videos that have become the trademark of the site.

When Don & Gayle joined with MileSplit founder Jason Byrne in 2003, to become its co-founders and part owners, he recognized the effect of the relational database on rankings and the ability to compile and parse data in many ways to create some of the features that have become so popular today, such as comparing athletes and virtual meets. One can follow an athlete's progression from middle school to high school, college and beyond. Don's role as COO of MileSplit helped to enable MileSplit to expand from the 4-6 states at the beginning, to active webmasters in 30 plus states; in addition to a national portal which also covers major meets in states without a webmaster, effectively giving MileSplit coverage in all 50 states.

With Flocasts’ (FloTrack, FloWrestling) acquisition of MileSplit last year, Don's duties continued to include webmaster management, and included a new title - Director of State Sites for MileSplit - a role he was basically already doing for MileSplit, but with limited resources.

Don continued both his national management and his PA publisher role for the past year (hence, many 80 hour weeks), but with continued growth of the network, he has had to retire as the PennTrackXC webmaster. Although you will still see him on the cross country courses and around the track, he will be there assisting with coverage for the love of the sport. His full time job is now selecting, training and managing other webmasters to provide the same great coverage that is the hallmark of PennTrackXC.

Lex Mercado, Don's associate webmaster for the last 5 years, is the new PennTrackXC webmaster. Lex's experience working with Don, his passion for the sport and the knowledge of the athletes made him the ideal candidate for the position, which he essentially assumed in late July of this year. 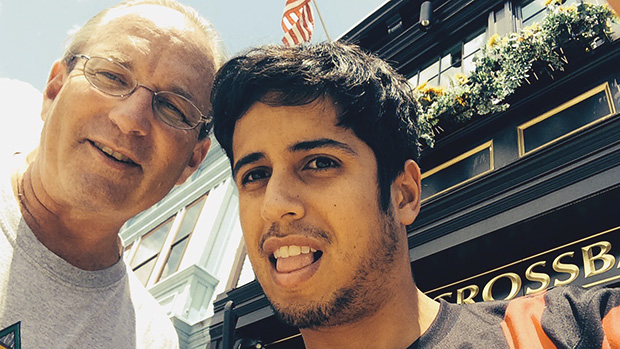 Lex; if the truth by told; would be a candidate for the new TV series ’Stalkers’ if the year were 2009.

A timer, coach at Archbishop Carroll, and Penn Charter/Muhlenberg grad, Lex decided that year that PennTrackXC was something he’d like to do.

At the PCL Champs at Upper Darby that year, he basically followed Don around the track, up the stairs (thankfully, not into the bathroom), and asked again and again, “what can I do to be a part of this?”

Don decided a stalker was better as part of the team, than a constant presence everywhere he went.

Don was a rather passionate writer and creative director for ad agencies in Philly… and while always conscious of the feelings of others, was rather direct with his opinions and decisions. PennTrackXC was no different. And Lex has learned (tolerated, suffered, endured) and yes, absorbed publishing knowledge as he has grown into a webmaster on the MileSplit Network.

It’s not an easy gig. So please give Lex some flexibility. You have to bleed the sport and realize it’s for the greater good.

Don’s not saying to let Lex off the hook. However, definitely realize that being available almost every hour of every day (Yes, even 1 am and 5 am calls have happened), it is a passion Lex shares with you.

In the meantime, Don will be working mere 50 hour weeks (still getting weekend calls for all sorts of stuff); spending time with his grandchildren; and yes, even covering meets.

So welcome Lex. But know that Don is watching.

And so far, so good. Really good.

Don and Gayle thank you for your support. We both wish we were still 30.