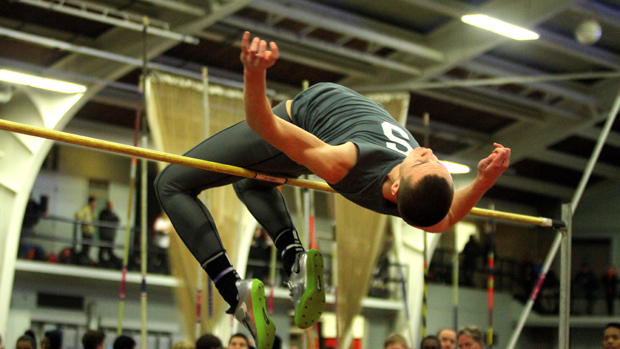 Chris Stone of Springfield Montco is the reigning indoor state champion in the pole vault and the high jump, and is the reigning outdoor AA champion in the pole vault. Throughout, the season, Stone will lead us through his final high school track and field season. Follow him as he looks to follow up a big 2013-14 with a bang before he starts his collegiate career at Auburn.

In his first entry, Stone writes about the journey that got him to this point in his athletic career, from battling injuries to balancing multiple sports commitments.

Hello my name is Chris Stone and I attend Springfield Township High School, a small AA school right outside of Philadelphia. I focus on the High Jump, Pole Vault, Javelin and Long Jump, but I am working towards becoming a decathlete in college. I have recently signed with Auburn University to continue my career at a Division 1 level.

Over the last 3 seasons I have accomplished more than I could have ever imagined.

After a knee surgery freshman year that only allowed me to compete in Javelin the last 4 weeks of the season, just in time for our team’s last meet before leagues. I was about 2 weeks into the event and had qualified for districts. Following that I won districts and got good experience at the state meet as a freshman.

My Sophomore Year I improved 4 inches in the high jump, 1.5 feet in the pole vault, and about 20 feet in the javelin over leagues, districts and states, to walk away with 2 silvers and an 8th place medal.

I had made the decision to do track in college after the great end to my season. I began to contact as many coaches possible to get my name out there early. I started with small colleges and when the replies came in I thought I would give some of the big time programs a shot.

In my junior year, I had suffered another knee injury, meaning more surgery. The recovery time was an estimated 5-6 months. I missed all of football and was on pace to miss all of basketball, so I made the decision to quit basketball for good.

Now with indoor track in sight, I thought I would push myself to get back. I had fully recovered in 2 and a half months, right in time for Indoor Track. This would be my first season of both indoor and outdoor. The hard work paid off and I finished the season with 2 individual State Championships in the High Jump and Pole Vault, leading my team to an overall finish of 3rd Place.

Going into the outdoor season, I had all the momentum in the world but come districts, I decided to go big or go home. I competed in all 4 of my events at districts adding the long jump from the previous year. With a silver medal and a gold medal from the best sprinter in our schools history, Jhaloni Johnson and I combined to earn the AA Boys State Championship. This was the greatest feeling of my career thus far, but hopefully this season brings event greater feats.

Over the offseason, I had not done much in the way of jumping. I wanted to focus on having a good football season and devote my time all summer to the team. As quarterback and captain, it was the best choice to focus on just football and give track a little break. Our team ended up winning the District 1 AA Championship, putting a great end to my football career.

During the fall everything was chaotic. I had taken 5 official college visits to Georgia, Alabama, Mississippi State, Auburn and Penn State 5 weekends strait, right in the heart of football season. I had a great experience catching some warm weather down south and enjoying some great football games. In the end I had wanted a few things that put Auburn ahead of everyone else.

Number 1: From moment I arrived, I felt a connection with the decathlon coach and head coach.

Number 2: The weather doesn’t get better. Even now I check what the weather is in Auburn, Al and see that is it sunny 6 days a week and about 15 degrees warmer. You can’t tell me that’s not perfect training weather.

Number 3: The facilities blew my mind. The weight room was massive and the track was beautiful.

Finally the atmosphere around campus is unbeatable and I am extremely happy with my decision.

For this upcoming season I have some huge goals. I would like to win some more state championships as well as break some records. It’s very early on and it’s hard to put a realistic yet difficult goal out there for myself. I have huge hopes this season and can’t wait to improve add some events and get better as an overall athlete.