The 60 meter dash will be a rematch of last week's TFCAofGP Meet of Champions of the only two sprinters to break 7 seconds at the 60 meter distance.

Reigning champion Christian Brissett of Cheltenham has spent more time this racing the 55 meter distance the 60 meter distance. Brissett has 7 races at 55 meters, winning four of them, including the Millrose Games in 6.41. He is unbeaten in four appearances at 60 meters, breaking 7 seconds in three of them. Brissett has only lost two of his 60 meter contests in the past 12 months, and this season, he has had two separate runs in the PA#1 spot at 60 meters.

That is due to the emergence of Lasalle junior Charles Headen. Headen has come on strong in the month of February with a victory at the Varsity Classic, followed by a state leading 6.94 to win the PCL Indoor Championship. In his first match up against Brissett at the TFCAofGP Meet of Champions, he ran a lifetime best 6.89 to fall just .01 seconds short of the champion Brissett. Headen was the first man out of the semifinal last season in his first state meet appearance. This season, he will have the confidence of being able to run step for step with Brissett. Last season, Brissett won by thousandths of a second. Will that be the case once again? 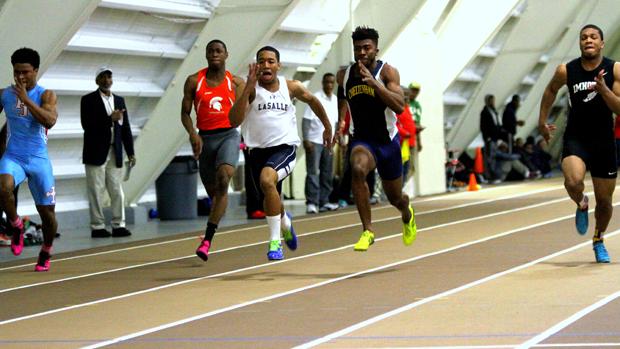 TSTCA winner Kevin Garbark of West Mifflin is on a 4 race winning streak, breaking 7.10 3 times. This will be his first ever indoor state meet appearance. Osiris Nicholson and Nkosi Pile have been a strong 1-2 punch for the Church Farm School. Nicholson was 3 rd at the Millrose Games and won the Burdette Classic. Pile finished 3 rd at the TFCAofGP Meet of Champs in a season best 7.04. Neither of these two runners have made it to the indoor state meet in their careers. 2014 semifinalist Yeedee Thaenrat of Father Judge got off to a hot start early on, only for his momentum to slow down as of late. His seasonal best of 7.05 dates back to December 30.


Like the 60 meter dash, Brissett has been above the rest in the 200 meter dash, earning a then US#2 time of 21.89 back in December. It sits as his only appearance at 200 meters this season. Brissett was 5 th last season, but he will be favorite this time around.

The other returning medalist from last season is silver medalist Tyler Whitmore of Upper Moreland. Whitmore will have to place high the hard way, as he is ranked PA#19 this season with a 22.82 performance. He ran 23.17 in his last 200 meter appearance two weeks ago. He has broken 22 seconds indoors once and that was in his silver medal performance a year ago.

The Norristown duo of Andrew Dillon and Corey Davenport finished virtually together in their last appearance at Franklin and Marshall a month ago. Davenport has broken 23 seconds in his last three appearances, while Dillon has run under 22.20 in both of his appearances. This will be the first state meet for the duo.

Ade Roundtree of Imhotep ran 22.17 in early January, and if he can find that form, he will be a contender for a high place. Headen will look to translate his 60 meter form into the 200 meter dash. He's only broken 23 seconds one time in four appearances. Charles Snorweah of Pennsbury won the Burdette Classic and PTFCA Carnival and has started to find his top form that he displayed for most of last season. Donovan St. Louis of Upper Darby and Kevin Garbark of West Mifflin will be ready to take advantage of any slip ups at the top.


The big news in the 400 meter dash is that the reigning champion John Lewis of Cheltenham has opted to not defend his crown and run the 800 meters instead.

This decision opens the door for the 2014 silver medalist Charles Snorweah of Pennsbury. Snorweah only has one appearance, but he ran 49.28 after only a couple weeks back after a long football season. His fitness has improved since, and more will be expected from the senior. A sub 49 second performance will be a first indoors for the Rutgers signee. 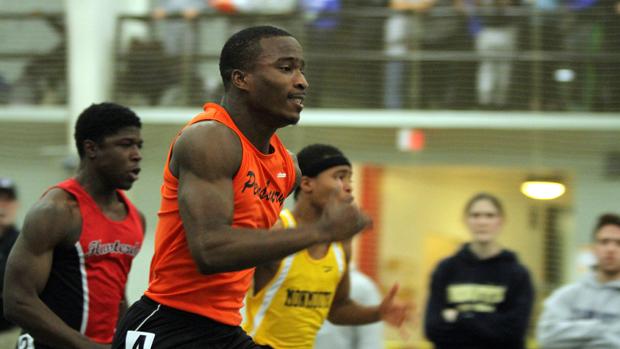 Hunter Small of Garnet Valley is the other sub 50 second runner in the field, running 49.64 on President's Day, but stuttered to a 10 th place finish at the Meet of Champions. His 49.64 is the best time by over two seconds compared to his other 3 appearances.

Donovan St Louis of Upper Darby and Andrew Dillon of Norristown are likely to earn a high place in this event. The two of them have earned some big victories as of late. St. Louis has won three of his four appearances, including a win at the TFCAofGP Last Chance Meet two weeks ago. Meanwhile, Dillon is coming off the biggest win of his career, defeating John Lewis and Sean Conway of Neshaminy to run a lifetime best 50.19. Dillon has three straight sub 51 second performances entering Sunday's state meet.

Luke Everidge of Central Dauphin East and Isaiah Smith of Abington will be sleepers for high places, as they enter the weekend coming off big sub 51 second performances, a good boost for their confidence.


The 60 meter hurdles appeared to be one of the toughest races to call for most of the season. And then Saturday happened and a purple fury stormed to the top of the list.

The Upper Darby duo of Mason Weh and Akeim Thomas shot to the top of the hurdles list at Saturday's TFCAofGP Meet of Champions. Akeim ran 8.09 seconds twice in 90 minutes to share the PA#2 spot with Western Pa's top hurdler and 2014 silver medalist Mitch Valko of South Fayette. Weh surged to a state leading 8.02 in the finals on Saturday to make him the favorite after a slow start to the season. Thomas took nearly half a second off his personal best in his 8.09 double. 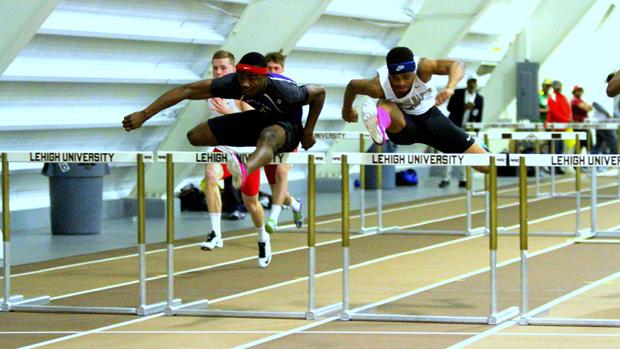 They will be contending against Valko, who was the silver medalist last season. Valko has had a strong season in 2015. Barring one meet, Valko has been unbeaten, running 8.09 on two separate occasions. Valko has two career sub 8 second performances, both at the state meet last year.

Charles Bowman, Jr. of Central Dauphin East has been on a roll since the first meet of the season. Bowman, Jr. is undefeated at both 55 and 60 meters, running 8.11 to win the Carnival two weeks ago. He will likely do better than his 17 th place finish at states a year ago. Bowman, Jr. will enter the meet full of confidence, having also spent the most time at PA#1 this season. 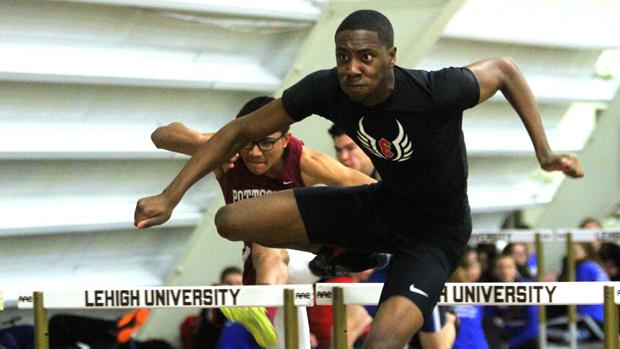 In both the 4x200 and 4x400 meter relays, teams will chasing the dominant Cheltenham team who have failed to be defeated by any PA relay team this season.

Cheltenham started their season with big success in the 4x400 meter relay, running a US#1 3:20.08 at the Hispanic Games. Three weeks later at the Armory Track Invitational, they were victorious once again with a US#2 3:18.73. At Saturday's TFCAofGP Meet of Champions, they broke a 42 year old meet record, running 3:23.41 to record the fastest flat track time in the state.

Their 4x200 meter success has been just as impressive, running 1:28.37 at the recent Millrose Games. They haven't lost to any PA competition and have finished no worse than 2 nd in any meet. They are also US#2 in the 4x200. 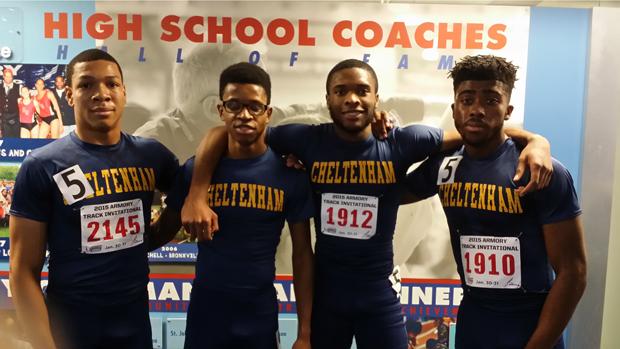 In the 4x200 meter relay, Upper Darby and Central Dauphin East have the personnel to make them challengers to Cheltenham. Upper Darby have run 1:29 in both of their New York appearances. Central Dauphin East ran 1:30.5 at State College last Thursday to put themselves in contention. A large group of 1:31 teams will look to make the medal stand, with Penn Wood having been the most consistent out of all the teams around them. West Mifflin is the top team from Western PA looking to make the medal stand, running 1:32.04 last week at the TSTCA Champs. Church Farm School will have Nicholson and Pile anchoring their squad that won the TFCAofGP Meet of Champions on Saturday.


In the 4x4, Penn Wood has been the only team able to come close to giving Cheltenham a run for their money this season. At one point, Penn Wood were the US#2 team behind Cheltenham, running 3:21.66, one of two times they have broken 3:23.

Norristown has a pair of strong legs that have pushed them to a 3:25.6 performance last week at State College. Upper Darby are also in the mix, as the 4 th team to break 3:26 this season. Donovan St. Louis will be a big leg for the Royals.