The 60 meter dash features six of last season's eight medalists. But in the eyes of most fans, there may only be three sprinters to keep an eye on in the center of the facility on Sunday.

2014 silver medalist and reigning state leader Chanel Brissett of Cheltenham has had far from a sophomore slump in 2015. After starting the first month of the season on the injured list, Brissett got her season going on the 2 nd of January with a 7.82 win in the 60 dash. Not bad considering all the time off. Her season then caught fire, finishing in the top three in every 55/60 meter dash race since. In that time, Brissett knocked off former PA#1 Taylor Chapman of Pennridge in the 60 meter dash at the Kevin Dare Invite 7.55 to 7.56. Despite all that success, her mission to keep the 60 dash title in house (teammate Katelyn Jackson won last year) hit a snag last Friday night. 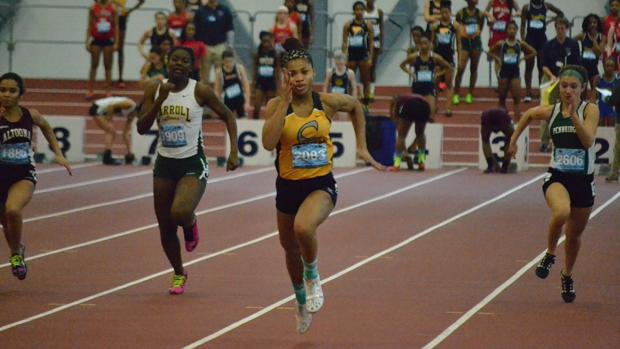 The newest member of the Pennsbury track team, Dasia Pressley, completed her rise into state title contention after not starting her season until mid January. In her debut race, she ran 7.74 to start off her season on a high note. After some 55 meter dash success, she finally got to line up toe to toe with Brissett on Friday at the DVGTCA Meet of Champions. The result was huge, as Pressley defeated Brissett 7.57 to 7.61. The rematch this Sunday will play a huge role in which team wins the state title. 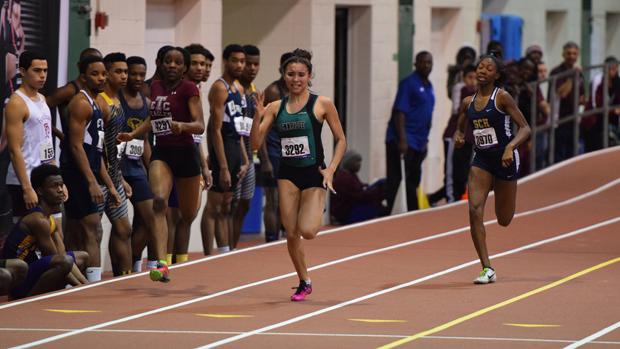 But prior to these two stealing the headlines, all the headlines belonged to Taylor Chapman of Pennridge. While Pressley and Brissett were getting themselves fit, Chapman was torching the track every time she stepped onto it. Every time she competed, she was earning a state lead and/or a national top five mark. She was the first to break 7.70 when she ran 7.67 at the Christmas City Relays to hold off Jaylune Aminu of Liberty by .01 seconds. But just like the Kevin Dare Invite was a boost for Brissett, it started an opposite trend for Chapman, who hasn't earned a victory at any distance since. Finding her early season form will give her a chance to win her first career state gold medal.

Outside of these three, Lauren Costa of West Allegheny, Jameela Muhammad of Paul Robeson, and Alli Wyland of Hollidaysburg are the other returning medalists. Costa has been unbeatable in the Western part of the state, winning four of five meets, including a seven race winning streak (prelims and finals). Muhammad has spent the season chasing the top three all season, but has been on her way towards reaching the form that made her a major player in her first two seasons. Wyland has only competed one time this season, running 7.7 in January at State College.

Christina Johnson of Susquehanna Township is a contending medalist after leading her team to a fantastic season under a new head coach. Johnson was the winner of the PTFCA Carnival in 7.78, the best of her career.


The athletes in the 200 meter dash sound very familiar to the names from the 60 meter dash. The top three and four of the five ladies who ran the seeded heat last season are back for another go at 200 meter gold. 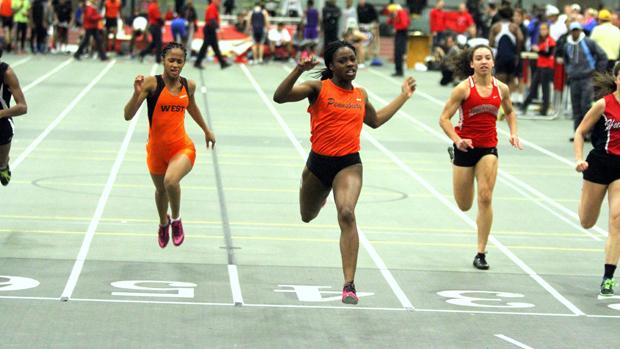 2014 runner up Chapman has had her most success at 200 meters this season from the very start. In seven 200 meter races this season, Chapman stormed to victory in her first five, starting at 25.52 at Lehigh on the opening night to a T-US#9 24.49 at the Hispanic Games. But like the 60 meter dash, she tasted defeat for the first time at the hands of Brissett at the Kevin Dare Invite on her way to a 4 th place finish, which was also the same place she finished at Friday's DVGTCA Meet of Champions (25.52). Like the 60, regaining her early season form will be key for the senior.

Brooklynn Broadwater of Springside Chestnut Hill was the bronze medalist last season, but has failed to taste victory in five attempts, losing to Chapman twice. She has broken 25 seconds twice, including her last appearance at Kevin Dare back in January (24.90).

Brissett struggled to an 8th place finish last season, but she enters Sunday's state meet as the state leader with her 24.46 performance at the Kevin Dare Invite. Like the 60, her performance against Pressley could have a major say in the team title race.

The contenders outside of the returning medalists will have a strong say for medal places. Ty'asia Dansbury of Harrisburg broke 25 seconds last Thursday with a time of 24.6, a lifetime best. 9 th grader Janaya Webb of Norristown was the PTFCA Carnival winner, but was behind Dansbury last Thursday at State College. She has four wins in the event this season with six straight 25 second performances. Husniyyah Rodgers or Pennsbury, Alexandra Kitchell of Springside Chestnut Hill, and Alicia Collier of Penncrest are strong medal contenders with sub 25.50 performances this season.


Entering the 400 meter dash last season, PA did not have anyone under the 56 second mark. Outdoors, only one girl achieved that mark, and as a result, won the state title. This winter, a different girl broke 56 seconds and is the defending indoor champion. On Sunday, those two will square off.

Defending champion Brooklynn Broadwater of Springside Chestnut Hill has been on fire in her title defense. In three appearances, she has broken the 56 second mark twice, leading the state with a T-US#8 55.46. She also has two victories in those three appearances. 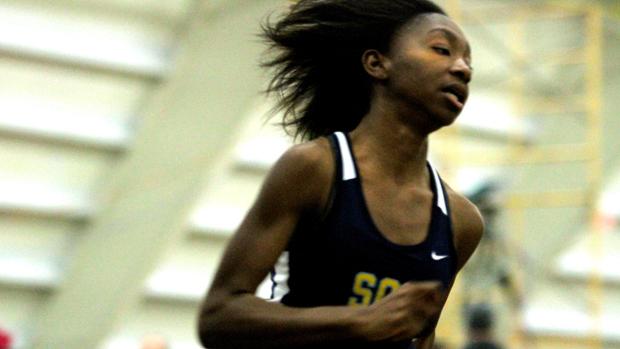 Chasing her will be the reigning AAA outdoor 400 meter champion McKenna Keegan of Avon Grove. At the state meet last year, Keegan broke 60 seconds for just the 2 nd time indoors, earning a 7th place medal. She has been on a tear since then, winning the outdoor state title with the state's best time. This season, it has been more of the same, winning all three of her appearances, including a come from behind victory over Ty'Asia Dansbury of Harrisburg at the PTFCA Carnival in an indoor personal best 56.94. For these two, it will a first head to head match up. How appropriate that the reigning state champions will battle for crown of undisputed champion at 400 meters. 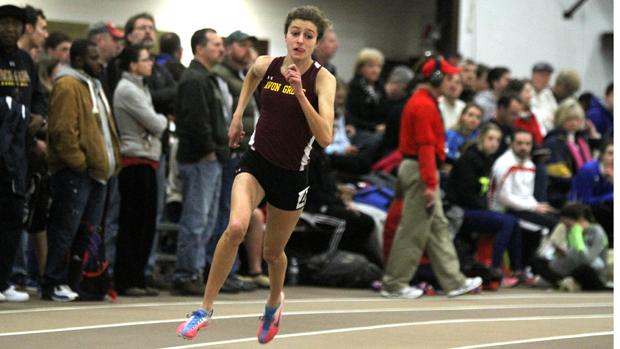 But out to spoil the party at the top will be Dansbury, who has a 57.00 personal best from her narrow defeat to Keegan two weeks ago. She does have 3 wins in 4 appearances this winter. Nicole Burke of Cheltenham is the 3 rd sub 57 second runner in the field this season, running 56.95 at Kevin Dare last month. Points will be big for her team, so another big improvement will be helpful for the Cheltenham title defense. Husniyyah Rodgers of Pennsbury will look to place ahead of Burke and DVGTCA Meet of Champs winner Alexis Crosby of Cheltenham for the Pennsbury title cause.


Despite six of the top seven from last season all coming back, the 60 meter hurdles has been about one girl and one girl only for 95 percent of the season and that is state record holder Ciara Leonard of Cheltenham. The senior has been nearly perfect all season at both 55 and 60 meter hurdle distances. She has won 11 out of 13 appearances in all hurdle competitions this season, and she has spent some time as the US#1 hurdler at 60 meters with her 8.47 at the Kevin Dare Invitational. Leonard has broken 8.70 an impressive five times this season and her slowest time of 8.86 was way back on the opening night. 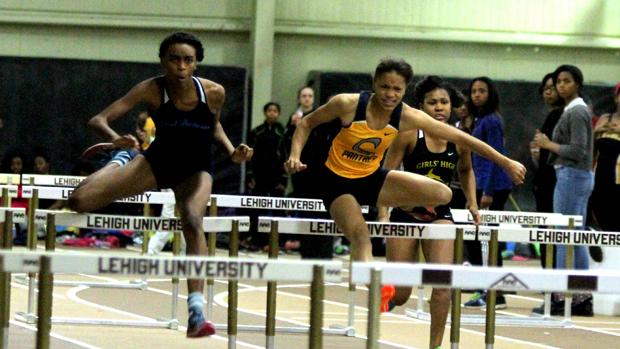 Even though Leonard is the state record holder and the favorite for Sunday, she is not the state champion. That title belongs to Sierra Brabham-Lawrence of Harrisburg. Brabham-Lawrence equaled the state meet record with a time of 8.45 to edge out Leonard. Injuries have slowed down Brabham-Lawrence in 2015, but her return to the hurdles at the PTFCA Carnival was a success, running 8.70 to win the meet. Like last season, Brabham-Lawrence has had a light hurdles schedule, racing in just 2 meets. Defending her title will be a tall task, but Brabham-Lawrence has shown that she has the ability to retain the title. 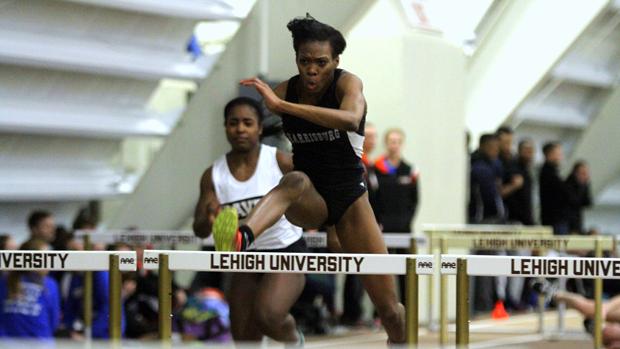 Markeeta Thomas of Paul Robeson has slowly found her best form in the past few weeks, getting close to her bronze medal 8.66 from last season, running 8.73 last week at the DVGTCA Meet of Champions. Thomas is looking to earn a medal in the hurdles for the 4 th time, with her best finish being last year's 3 rd place.

Aspen Gaita of Stroudsburg looked like a contender to challenge last season's top two after a strong December. But her last appearance at the PTFCA Carnival was a struggle, running 8.99 to finish 4th. She has had a better year, breaking 9 seconds three times this season compared to zero times last year. If she can find the form that got her a lifetime best 8.88 in December, she will improve on her 7 th place finish last year. 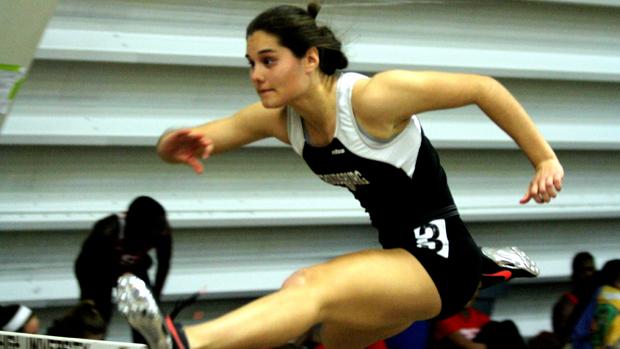 Uchechi Onuonha of Pennsbury and Jolesha Boulware of Coatesville are the other two sub 9 second 60 meter hurdlers this season. Onuonha hasn't broken 9 seconds since the opening night and has yet to make a state final. Boulware will be making her first career indoor state meet appearance on Sunday. She ran 8.98 at the PTFCA Carnival to finish 3 rd and break 9 seconds for the first time in 8 attempts this season.


For the sprint relays, both of them have heavy favorites who have hit the ground running from day 1.

The 4x200 meter relay has been dominated by Cheltenham. The US#4 team have come close to breaking their own state record of 1:39.00, recording a 1:39.46 in January at the Kevin Dare Invitational. They have been successful against all PA challengers, and will be favorites once again to retain their state title in this event. 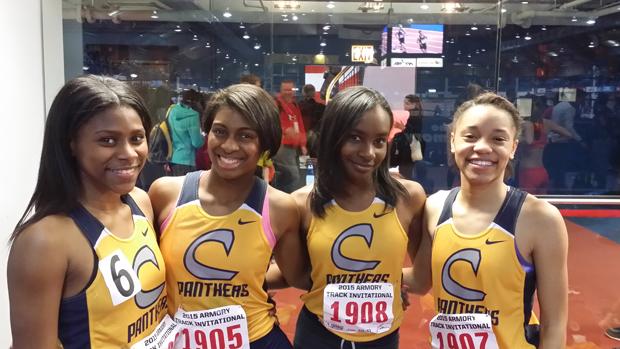 Pennsbury may have the weapons to match up head to head with the champions, especially with Dasia Pressley's addition. The Kevin Dare Invite was supposed to match up these two squads, only for the snow to redirect Pennsbury to the New Balance Games in New York, where they would run a PA#2 and US#11 1:40.96 to emerge as the strongest challengers to the leaders.

Springside Chestnut Hill has a young team with Brooklynn Broadwater leading the charge. The Inter-Ac squad has run a PA#3 1:42.56 in a separate heat at Kevin Dare, one of two full strength runs. The other was a flat track 1:45.33 the week before. With no seniors in the team, experience may be lacking to go up against the top two. But with a strong leg like Broadwater, anything can happen if it's close.

Susquehanna Township has been the top 4x2 team outside of the Southeastern PA region, running 1:42.99 and spending some time in the PA#1 spot in the first few weeks of the season. Overbrook won the DVGTCA Meet of Champions in the 3 rd of 5 heats last Friday night, and have run 1:43.07 this season. Harrisburgh's duo of Brabham-Lawrence and Dansbury make their team a sleeper pick for a big place.

8 teams overall have broken 1:45 this season. Handoffs are always key in the two turn stagger format of the state 4x2. The state record is 1:39.00 by the champions Cheltenham. Can that go down?


Like the 4x2, the 4x400 meter relay is top heavy, as only two teams have managed to break 4 minutes this season.

Springside Chestnut Hill accomplished that feat on December 20 and haven't looked back since. They have broken 4 minutes in each of their last three full strength appearances, recording a US#9 3:50.78 at the Armory Track Invitational in late January. Their last two performances have been motivated by a chasing Cheltenham team running right behind them. Cheltenham has run 3:52.23 for US#12 honors while chasing the leaders. The team title race for Cheltenham may come down to this event, and if victory is required to retain the team crown, they will face a tough challenge to upset the state's best team. 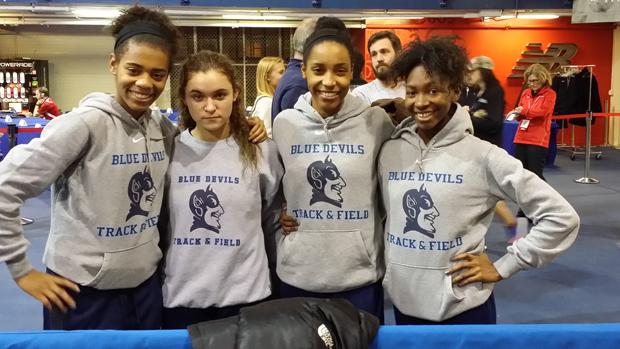