Sarah Walker of Germantown Friends reclaimed the PA#1 spot in the 800 meter run with a blitzing US#4 mark of 2:06.43! Walker trailed the rabbit through a 60 second first 400 and then did the hard work on her own in the 2nd lap to run a personal best at the Distance Festival for a 3rd consecutive season! 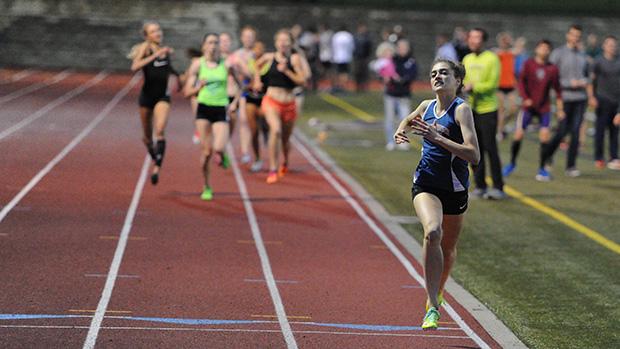 Sam Ritz of Germantown Academy hopped off a plane from Eugene Oregon 48 hours before competing in the high school MOC 800 against John Lewis of Cheltenham and Domenic Perretta of Beaver Falls, who made the 5 hour trip from Western PA to compete. Lewis led the pack through a 52 second 400 and then the lead continued to switch between the three top mid distance runners in the state this season. In the end, the three were neck and neck on the final straightaway, with Ritz finding the strength to defeat Lewis and Perretta. Ritz ran a US#4 1:50.72 to Lewis' 1:50.93 and Perretta's personal best 1:51.27!

Zach Brehm of Carlisle competed in the high school boys MOC mile after his 3200 meter heroics 10 days ago. Brehm led the field through three 63 second laps. Once the chips were down for the final lap, Brehm used his speed to power through and end the race victorious with a state leading 4:10.25.

Aislinn Devlin of Downingtown West stepped up and competed in the Elite women's 1500 meter run and had great success, hanging with the top three for 1200 meters of the race and looking good. Once the race shifted up a gear, Devlin did all she could to keep pace, but had to settle for a solid 4th place finish in 4:36.54.

The meet also saw personal bests from Olivia Arizin of Cardinal O'Hara, Mikayla Schneider of Notre Dame, and Marissa Sheva of Pennridge in the 800, with all three breaking 2:12. Also, Abbe Goldstein of Germantown Academy and Anna Willig of Great Valley ran lifetime bests in the mile.