John Lewis of Cheltenham was the main event of the afternoon in the bright sunshine of Greensboro, North Carolina on Sunday! The senior and Clemson signee turned the clock back a full month, when he led from start to finish in the state meet 800 to set a new meet record. Today, he did it again and he was EVEN FASTER!

Lewis became the national champion in the 800 meters with a US#2 1:48.33, the 2nd fastest time run at the National Championships! The time also broke his state record by nearly half a second from that state race! His splits were 49.41 and 58.93! 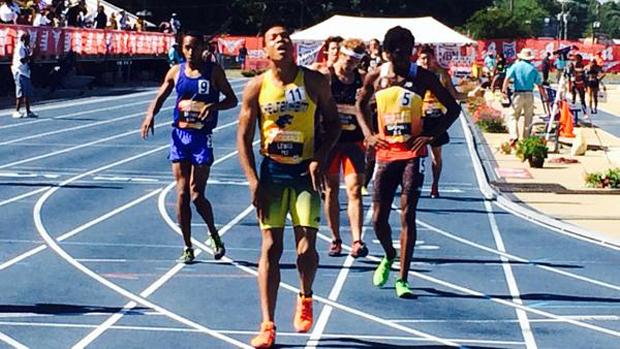 Sam Ritz of Germantown Academy finished 5th in the same race in 1:52.93 to earn his own All American certificate!

PA also earned a pair of runner up finishes on the final day of the New Balance Outdoor National Championships!

Sarah Walker of Germantown Friends earned a runner up finish in the 800 meter run with a time of 2:07.72 (1:05.31, 1:02.42 splits), just missing national championship gold. In the unseeded section, Olivia Arizin of Cardinal O'Hara ran 2:09.07 to win the heat, and her time was good enough for 6th place overall and All American honors!

The other runner up finish went to the boys of Central Dauphin East. They finished 2nd in the 800 meter sprint medley relay in 1:31.69, with Charles Bowman Jr splitting 48.50 on the 400 meter anchor leg. They also added a 3rd place finish in the 4x400 meter relay with a time of 3:15.29, a great way for the team to end the season after a tough state meet!

Saahir Bethea of Cheltenham looked like the month between meets didn't slow him down. The AAA long jump state champion earned the bronze medal in the long jump with a mark of 24-5.75, the 2nd best mark of his career.

Emily Stauffer of Cocalico earned an All American certificate in the shot put, where the junior finished in 5th place with a mark of 46-10.75. 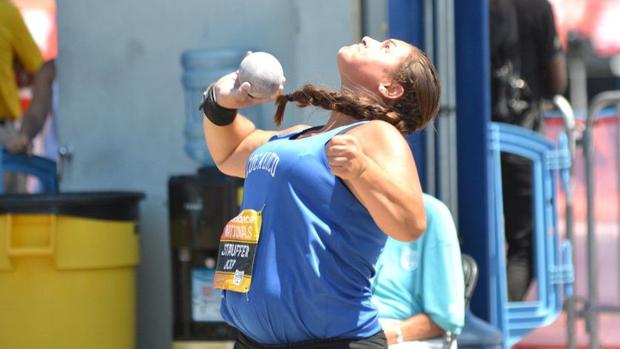 Erika Vozey of Tyrone Area is an All American high jumper after recording a 5th place finish 5-7.75!

Neumann Goretti girls ended their weekend of close calls with the closest call they could have had. They were 7th in the 4x400 meter relay in 3:44.26, with Sydni Townsend anchoring the squad in 54.23.

WE HAVE A NATIONAL CHAMPION!!! That honor goes to Williamsburg Community javelin thrower Michael Biddle! The top American finisher at the Penn Relays now holds the title of best javelin thrower in the country! Biddle threw 212-2 to win by over 11 feet! Biddle had three throws in his series that were better than the entire field, and five of his six throws were over 200 feet!

Places 2-3-4 also belonged to PA athletes! Michael Marsack of Stroudsburg finished 2nd with a mark of 200-11, Grant Jones of Lasalle finished in 3rd place, five feet behind Marsack (195-11), and Grayson Hill of Cathedral Prep followed up his Carribean Games win with a 4th place finish in 193-6!

PA's incredible javelin performance will go down in history as one of the most dominant performances in a single event at a national championship!

Jordan Geist of Knoch added another All American certificate to his collection, finishing 4th in the shot put with a mark of 63-9.50!

Nick Dahl of Germantown Friends was the 2014 freshmen 2 mile champ at this meet. This year, he came within an eyelash of becoming 2015 2 mile national champion! The sophomore finished in a solid 3rd place with a new lifetime best of 9:01.81, PA's best finish on the track in championship events thus far! 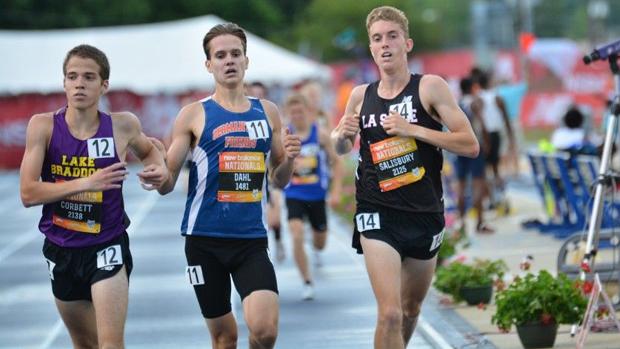 2-time AA Boys 100 meter state champion Jahvel Hemphill of Bloomsburg can now add All American to his list of accomplishments in his short career. The sophomore finished 6th in the finals of the Championship 100 with a time of 10.62, becoming the 2nd All American for PA on the weekend. 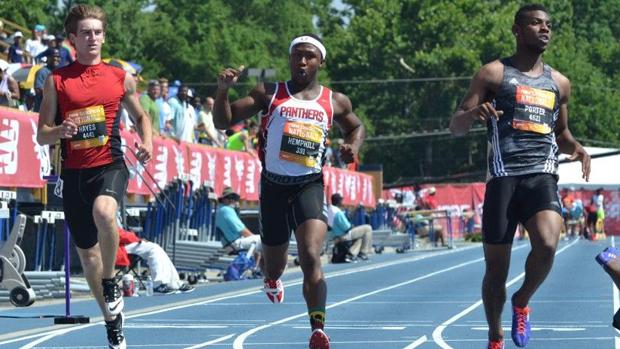 Two more PA athletes earned victories on Saturday. Josh Hoey of Downingtown West won the freshmen mile with a time of 4:24.31, becoming the 3rd PA freshmen athlete to earn a victory at nationals! 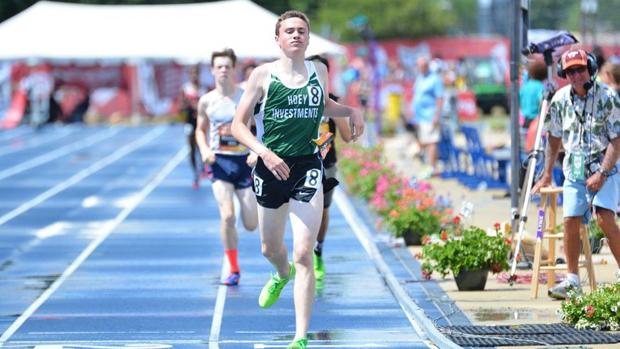 Abbe Goldstein of Germantown Academy ran her first career full two mile race and she came away victorious in the Emerging Elite race with a time of 10:56.75! 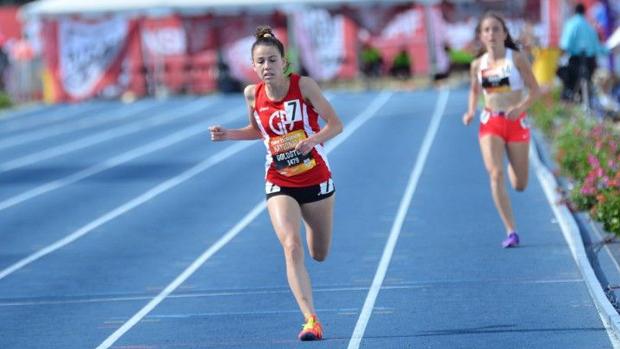 Christopher Dock's girls just missed All American honors in the girls 4x100 meter shuttle hurdles relay, finishing 7th with a time of 1:03.31. Neumann Goretti girls finished 9th in the 4x200 meter relay in 1:40.75. Maura Kimmel of Moniteau finished 10th in the girls championship discus with a mark of 139-1.

Meanwhile at Brooks PR, Maddie Villalba of Central Bucks West traveled cross country to run in her first career postseason national meet. She went to Seattle to compete at the Brooks PR Invitational in the 800 meters. After sitting with the lead pack of 6 runners for most of the race, she finished 5th in the end with a new lifetime best time of 2:07.27!

A two hour rain delay may be the big story of the first day of the New Balance Outdoor National meet, but PA’s already come through with some big performances in the early stages of the competition!

PA showed the nation that they have some strong up and coming jumpers, with Austin Kratz of Christopher Dock (21-2.75) and Breana Gambrell of Athens Area (18-5.75) winning their respective freshmen long jump events! 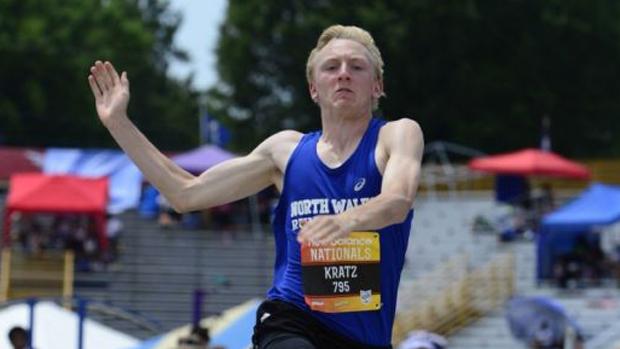 Kratz was able to achieve his winning mark on his 4th jump, while Gambrell got her best mark on her 5th jump! 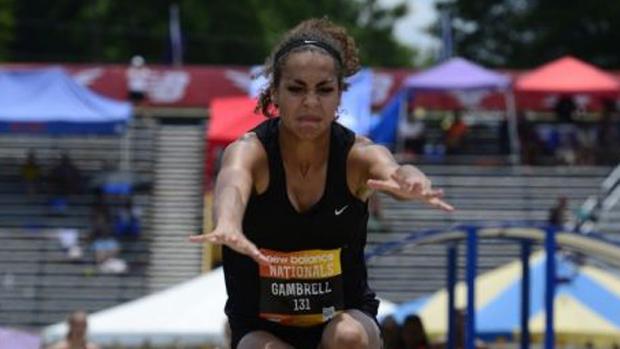 Taylor Givens of State College finished 5th in the same event behind Gambrell with a mark of 17-5.25.

Also snagging headlines for the Keystone State was Emma Planck of Downingtown West, who finished 2nd in the emerging elite mile run with a lifetime best 4:58.72!

Paul Power of Spring Ford finished 4th in the boys emerging elite mile run with a time of 4:16.91.

The meet was scheduled to end around 10pm, but the rain delays prevented that from happening, and the meet finished deep into the North Carolina night.

In that late night, PA earned their first All American certificate and that went to 6th place girls javelin finisher Danielle Collier of Hickory. After not recording a distance at states, All American recognition was the perfect redemption. Collier threw 140-10 to edge out fellow PA athlete and AA state champion Brooke Hinderliter of Redbank Valley by 6 inches, and Jocelen Ruth of Kutztown Area by nearly 3.5 feet! 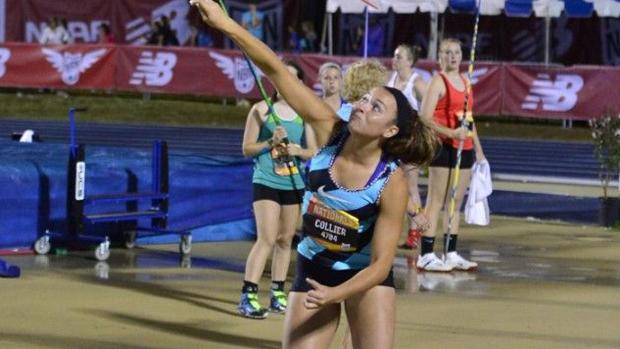 In the boys emerging elite pole vault, Hayden Fox of Hempfield (7) was victorious with a clearance of 15-3.50! He won on misses, as he was perfect at opening height. Austin Kratz of Christopher Dock won his 2nd medal of the day with an 11.22 freshmen boys 100 meter performance to finish 6th. Jacqueline Horner of State College finished 2nd in the emerging elite girls javelin with a throw of 118-8.