AA state champion Dominic Hockenbury has provided us with an update on his senior season with a look into the final few weeks of his offseason training and his first week of preseason training with his teammates. 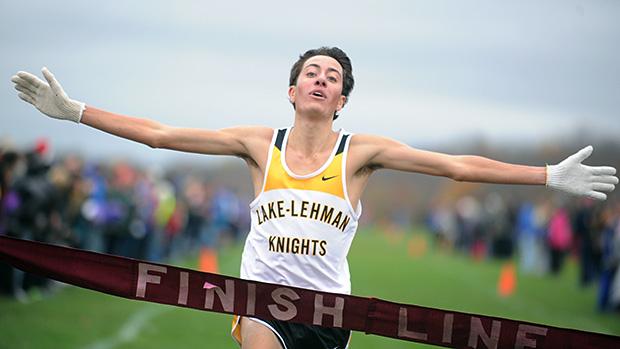 As August began I kept my weekly mileage consistent, between 85 to 90 miles per week. Along with the high mileage I incorporated speed work into my regular training such as progression runs, farklets, temp runs, and hill sprints.

The second week of August I left Pennsylvania for a family vacation in Avon, North Carolina. There I had a change of scenery and maintained my weekly mileage. The overall goal of this month was to maintain my mileage base, incorporate more speed work, and continue to work on my strength in the gym in order to stay strong and well balanced.

During the third week I continued to maintain my mileage while adding hill work in the middle and end of training runs to stimulate both the Hershey and Van Cortland courses. Not only has this laid a base for the coming season, it began to prepare me for the next level, college. Hard preparation, a solid base of mileage, strength, and speed training during the summer are money in the bank for XC season as well as the future.

Today was the official start of our team's pre-season training. Our team decided to meet at a local soft gravel trail. We all did our usual warm up consisting of a one mile warm up run and some plyometric drills. I went out for a 10 mile farklet run consisting of twenty, one minute surges slightly below 5k race pace. The early morning weather turned out to be quite cool making for an enjoyable run. It was also great to get to see how much many of my teammates improved over the summer months, it was easy to tell that they put a lot of hard work in.

Today I ran on my own from my house early before the start of practice. I decided on a 12 mile run, which consisted of the first 6 miles being rolling downhills and the last 6 miles being all up-hill. I made sure to relax on the downhill sections and really push the pace on the uphill parts.

After I ate a quick breakfast and got ready to go to the gym for strength training, however I found it was closed due to a water main break. Instead, I did a half hour of core strengthening followed by various body weight exercises.

I met with my team today, at the same running trail from our Monday practice. We all did our warm up run and plyometric drills then went on our run. My run consisted of a 10 mile farklet consisting of ten sections of two minute surges at 5k race pace. Following the run I did ten, 15 second hill sprints at a nearby hill. Once home I ate a quick meal before going for a relaxed 40 minute swim to recover from the earlier run while getting some cross-training in.

Today our team met at our high school. We did our 1 mile warm up and plyometric drills together, and then went off on our run. My run was 12 miles on the nearby rolling country roads, with the last 4 miles being at tempo pace. Following that I did several barefoot strides in our schools field hockey field with some of the guys on our team.

This run felt really good, the tempo section felt relaxed and controlled as I averaged low 5:30 mile pace over the last 4 miles. Later in the day I went for a relaxed 40 minute swim in the lake our house is on. Being able to swim after my runs really helps me recover from harder efforts.

Today I ran from my house, early before practice. To start my run, I did 2 miles of relaxed running before starting an 8 mile tempo run around the lake. The road around the lake is flat, so I was able to fall into rhythm and run 5:20 miles.

After I ate a quick breakfast and headed to the "now open" gym for strength training. At the gym I felt great despite the earlier tempo run. Later in the day I decided to go out on an easy 6 mile run followed by a relaxed 15 minute swim to recover from the day's work.

Starting early in the morning I did a 5 mile run, 5x 45 second hill sprints, 5 miles, and 10x 15 second hill sprints to finish. Afterward I made sure to take the time to stretch out and use my foam roller. Later in the day I decided to take advantage of the warm weather and went out for a 45 minute swim at our lake.

Today was my weekly long run. I started early in the morning and went 15 miles averaging 6:20 mile pace. The beginning 10 miles of the run consisted of rolling hills while the last 5 miles were on the flat lake road, which gave me a chance to open up the pace more as I finished. Later on in the day I did some light core and hip strengthening before going for a short recovery swim.

The long run is my favorite part of my training schedule, and during the summer training phase I believe it is one of the most important.