Davis proved one again to be untouchable winning in 16:31. The Bulldogs sophomore has been helped this season by giving up football, a sport coached by his father Chris.

"Over the summer I was doing both sports trying to decide," said Davis. "When I decided on cross country I decided to go for the district championship."

"I was his middle school football coach and an assistant in high school," said Davis' dad. "It was a decision that when he came to me as a father it was yes, as a coach not really.

"But I realized where his heart is at."

Heart has been something that Davis has shown in October easily winning the NEPA and unofficial Heartland Athletic Conference championships.

Despite running a time at leagues that puts him ninth in the AA rankings the 'Shore sophomore knows he won't be in Kansas anymore when he gets to Hershey.

"Everything can change in a week," he said. "I just want to focus on states and do what I can."

In the team competition Mifflinburg won its first-ever school cross country title taking advantage of an off day from Lewisburg.

It was quite an achievement for a program that is only seven years old and counts -- up until Thursday -- as one of its greatest achievements as beating Lewisburg in a dual meet two years ago.

"We always thought we had a chance after we lost to (cross-Union County rivals) Lewisburg at a dual," said Mifflinburg coach and program founder Jeremiah Allen. "They went on a mission."

For four-time state qualifier Amabile it was almost unbelievable that his whole team would be running with him at the state championships this year.

"I remember when we started," said Amabile. "It's crazy and I'm so happy."

Their veteran coach Mark Sundberg, who had advised Allen when the Mifflinburg coach started his program, gave a tip of the hat to the Wildcats.

"It's a tribute to what he's been doing with that team for the last couple of years," said Sundberg. "It will make all of us rise to the next level."

With all of Danville senior Mackenzie Jones' accomplishments, an individual district cross country gold was not among them.

And maybe because of that the Bloomsburg University course has not been one of the Ironmen lead runner's favorite.

But Thursday nothing and no one got in her way as last year's PIAA AA third-place finisher got her first individual championship. 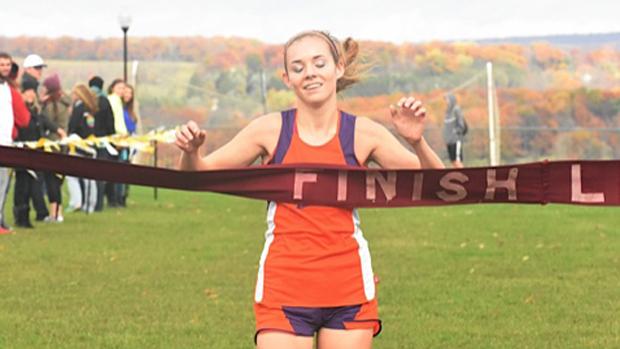 Jones got caught in the crowd at the start of the race but she rode it out taking the lead in the first 800.

"Coach Brandt always says not to waste your energy in the first 400," she said.

Jones finished in 19:24 the only elite time -- girls or boys -- of the day, but was most happy to be done with districts.

"It's a relief to say I never have to race here again.

"But it's a good way to go out especially with my team doing so well."

Although Jones is way out front of her teammates in most races, the senior feels support from the strong team behind her.

"At every turn I could see everyone was having a great race too," she said. "It really motivated me. I could see how well they were doing."

South Williamsport's Hunter Crawley was successful in defending former teammate Griffin Molino's district championship with his run of 16:52.20 in the Class A race.

"I wanted to stay in the top three at the beginning," he said. "I knew I had to get out early though so no one could get me."

Crawley is not naïve about defending Molino's state title. 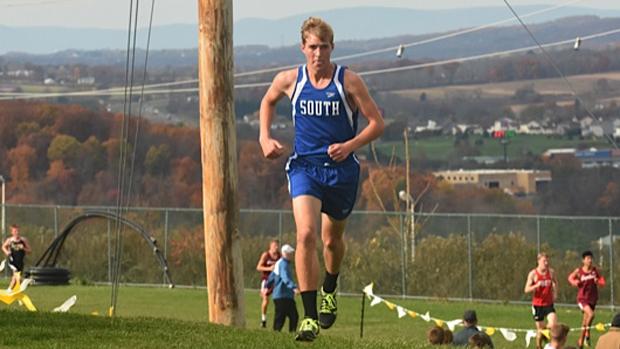 "That will be a really tough race. I'm going to have to push myself more than I'm used to."

The Mounties junior does have something to draw on for the effort.

"I'm going to think about districts last year when I just qualified (for states) in the 1,600. I don't want to be in that position for states."

South Williamsport's 2-1 victory over Southern Columbia via penalty kicks in the district Class A tournament gave the dual-sport athlete two wins on the day.

The boys team championship wasn't even close as Northeast Bradford's impressive 5,7,8,9,11 finish with an incredible 15 second 1-5 split lifted the Northern Tier team to another championship.

First-year runner Casey Ellis led the way for the Panthers who are poised to repeat a 2014 top-3 finish next week at Hershey. 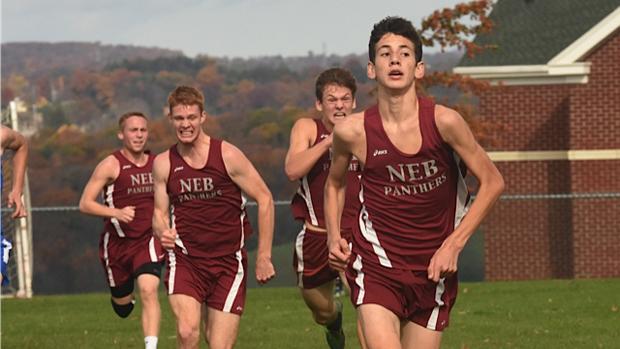 Warrior Run junior Tori Ross repeated as district champion in the A girls race but it wasn't the cakewalk the second-year runner had in 2014.

"I knew (2nd place Randi Jennings from Canton) was (going to be here)," said Ross. "I knew it wasn't going to be like last year." 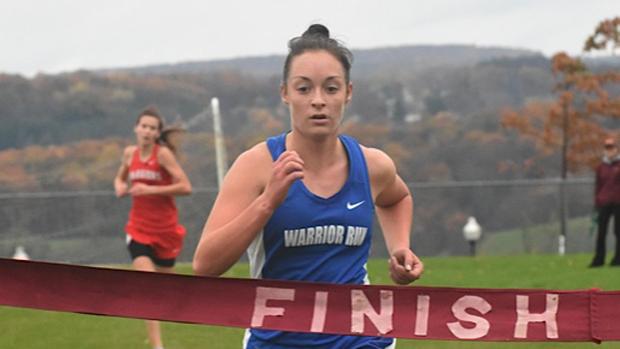 Ross broke away from Jennings but at the end of the race her fans alerted her to a surge from the Canton sophomore.

"At the end of the race people were like, 'she's coming, she's coming.' I knew it was time to go."

In the girls team championship Southern Columbia surprised everyone, including the Tigers coach, with the school's first-ever team title.

"At the beginning of the year if someone had said that we'd be here I'd tell them they were out of their mind," said SCA coach Lanny Conner.

But at the beginning of the year Conner had no idea of the talent and heart of his freshman class.

"We had five freshmen who went crazy," he said. "This is one of those things where it dropped in my lap.

"They showed so much heart. Some of them ran PRs or close in these kind of (wet and windy) conditions. That's a big deal.