After a three week layoff, the top PA boys will return to action this weekend. Some will head to Nike Cross Regionals, but many of the nationals contenders will head to storied Van Cortlandt Park on Saturday for Foot Locker Northeas Regional.

Heading the class is AAA state champion, Jake Brophy. The Central Bucks East senior enters the race as the top returner. He was fifth a year ago (the second PA runner across the line), qualifying him for Nationals in San Diego.The goal this year for Brophy? Win the Northeast. 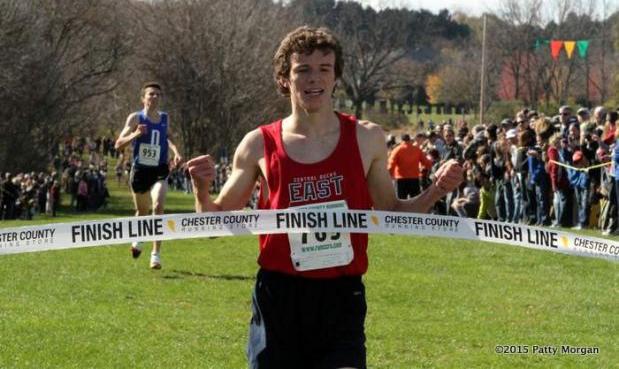 "I don't think I'm at my physical peak yet," Brophy (above) said at states.

He's tailored his training to leave something on the table for Foot Lockers. Despite not fully reaching his peak at states, he still outsprinted the Hoeys to claim his second straight state championship in the AAA race. In each of his major races this year, Brophy has allowed the race to come to him. He's won every time. We'll see Saturday what kind of tactics he'll bring to the table as his shoots for the win.

Lake Lehman's Dominic Hockenbury (right) has had a monster 2015 and he'd love to cap it off with a top ten finish on Saturday. Hockenbury came up just short of nationals last year, finishing in 15th and he's hungry for a better

result this year. He's been undefeated this year, including a sub-16 performance at Hershey, where he won the AA state title. A fast pace could bode well for the Syracuse recruit. Expect Hockenbury to put himself in the mix and possibly pull out his best race of the season.

Pennsylvania also has a host of "bubble" contenders. Among that crowd are Peters Township's Nick Wolk and JP McCaskey's Nathan Henderson.

Wolk had a breakout XC season. He ran a solid 4:22 to get fourth in District 7 on the track in the spring, but really put together a strong XC campaign. Before states, he won every race except Foundation in Hershey, where he was second to Brophy. At states, Wolk took fourth, out-kicking Downingtown West's Josh Hoey and Henderson down the stretch. His 15:53 at states produced a 54 second delta from 2014. He ran at Foot Locker last year, so he knows the course. He'll certainly be in the conversation on Saturday.

Henderson is another one to watch and it's not just because of his hair. The McCaskey junior won in impressive fashion at the District 3 championship. He broke away around the midway point and clocked in at 15:38 on the rolling hills of Big Spring. Wolk nipped him at the line at states, but Henderson is riding a lot of momentum into this weekend. A top ten finish is well in his ability.

After that, a number of PA guys will be vying for longshot bids. Plum senior Jake Susalla was eighth in AAA at states, going sub-16 after finishing fourth at the District 7 meet. That signals that his training is right on schedule to contend in New York.

Another threat is Zach Lefever of Ephrata. He missed states reportedly due to appendicitis, but Lefever still went sub-16 three times this season. He was second to Henderson at District 3, running a 15:52 at Big Spring. Assuming his health is in order, he'll have a shot. 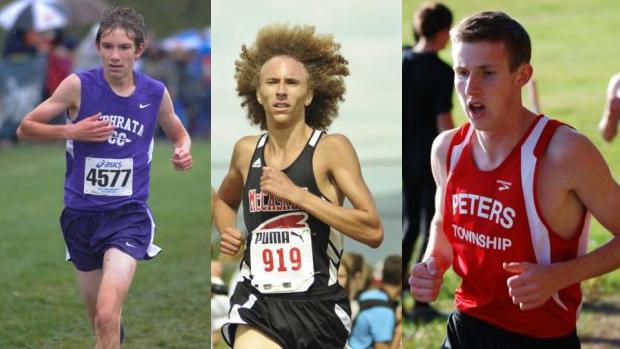 Zach Lefever (left), Nathan Henderson (center) and Nick Wolk will be among those vying for one of ten spots at Foot Locker Northeast on Saturday.

Wyomissing's Jack DiCintio won at District 3 in AA, but was 18th at states. He went out hard at Hershey and paid later in the race. Still, his 15:59 for the win at districts shouldn't be taken lightly. Other notable runners making the trip to New York this weekend are LaSalle's Eddie Goebel, Mt. Lebanon's Todd Gunzenhauser, Pleasant Valley's Seth Slavin, and the state's top frosh Michael Morris from Hershey.

Check out the full list of entries here. Today was the last day runners could sign up for the race.

The gun for the "Marty Lewis" Championship Boys race is scheduled for 11am for Van Cortlandt Park in the Bronx, New York. Be sure to follow @PennTrackXC and @Milesplit on Twitter for live updates from the Bronx. Check back at night here for photos, race video, and post-race interviews after the race.