The rain held out long enough for a somewhat nice weekend weather-wise and provided a big shake-up to the state rankings with many top performers kicking off their respective seasons. The big story of the weekend was Jordan Geist, who broke a 44-year-old state record. Read Phil Grove's feature on Geist and his 71-9.25 throw at the Knoch Relays.

There was plenty else to get excited about this weekend. Here's our recap of the first meets of April. 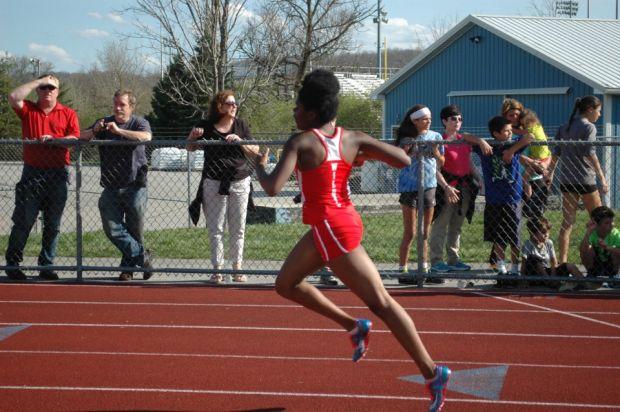 Bishop Shanahan's Chloee Klespies took home the win in the discus in a PA#4 of 128-3, a nice PR. Oxford's Katie Dodson kept up her hot start to the season, winning the 100 meter hurdles easily in a time of 14.58. So did Owen J. Robert's Teneisha Myers, who won both the 100 and 200 meter dashes. Downigntown West's Stacy Wolverton won the high jump, clearing 5-2.

Janese Lynch of Neumann Goretti put up a pair of nice early season marks in the throws. Lynch won both the shot put and discus, throwing 41-1 and 141-1 respectively in those events. Both marks are currently PA#2. Spring Ford's Aleigha Johnson followed up on an impressive start to her season with an even better triple jump performance on Friday. Johnson jumped 37-0, bettering her own PA#3 in the event and winning at O'Hara. The Cardinal O'Hara girls won the 4x800 in 9:42. Chichester's Nierra Berry had wins in both the 100 meter dash and then 300 meter hurdles.

In Virginia, some of the top PA team started their seasons off in some warmer weather.

Downingtown West's Josh Hoey, a week after setting a new PA#1 in the mile in North Carolina, won the 800 in 1:54.11 for another PA#1. In a competitive boys' mile, Camp Hill's Cooper Leslie was the top PA performer, running 4:21.34 for fourth. Downingtown West's Ryan Barton was right behind him in fifth in 4:21.58. Check out those full results here, featuring a handful of PA talent. In the 3000 meters, Winchester Thurston's Tristan Forsythe was the top finisher with a time of 9:02.59. PJ Murray of Conestoga was third in 9:06.31, Strath Haven's Ian Reid was fourth in 9:08.16.

St. Joseph's Prep's Miles Green got off to a fast start, running a very fast 54.77 in the 400 meter hurdles, signaling what should be a big season for the sophomore.

Archbishop Ryan's Monte Guess took home a pair of third place finishes. Guess leapt 21-5.25 in the long jump and then ran 15.23 in the 110 hurdles for bronze. 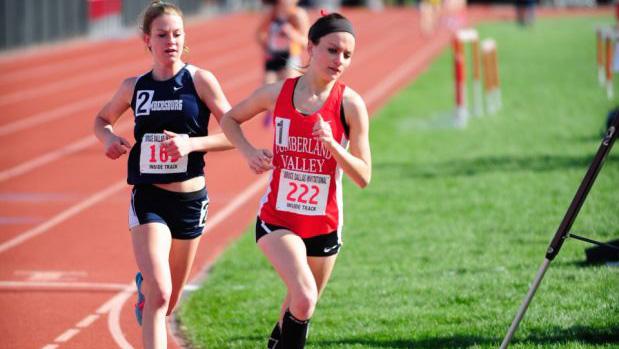 State College's Veronika Karpenko left Cumberland Valley with a pair of PA#1s at a big day at the 15th Bruce Dallas Invitational. There were high winds, but many competitors still put down some great performances.

In the world of quadruple winners, there was just one: Ty'Asia Dansbury of Harrisburg. After missing some of indoors with a knee injury, Dansbury made her presence known in a big way in the wind at Bruce Dallas. Dansbury won the 100m, 200m and 400m as well as a relay win with her 4x100 teammates. Dansbury is back and ready for a big junior season. She talked with PTXC afterwards:

Cumberland Valley's Mady Clahane won the 3200 meters and even set a new meet record of 10:54.11. Clahane out-dueled Chambersburg's Abby Yourkavitch for the win. Yourkavitch was also under the previous meet record, running a time of 11:02.99. In the 1600m, there was a nice battle for the win between State College's Natasha Fedkina and Lower Dauphin's Ella Breidenstine. Fedkina won it in a time of 5:10.22.

The throws generated some nice excitement. Taking the shot put was Kutztown's Jocelen Ruth, throwing 41-3 to beat Lower Merion's Vanessa Poe and Lake Lehman's Emily Johns. But Johns got the best of Ruth in the discus, throwing 124-0 for the win. Watch Johns' interview with Don Rich below:

On the boys' side, there was also quite a bit of action in the throws. The discus was hotly contested with Greencastle-Antrim's Campbell Parker coming out on top. Parker tossed it 158-0 for the win over North Pocono's Matt Slagus and Chambersburg's Kelton Chastulik.

Schuylkill Valley's Brendan Sparr won a competitive boys' long jump, beating Kier Miner by just a half inch. Sparr jumped 22-5.5 for the win and a new PA#1. Miner did win the 400, though, dipping under 50 seconds with a clocking of 49.94, his fastest outdoor time.

Coatesville's Terrance Laird, back after a big start to his indoor season, ran a PA#2 in the 200 meters. He clocked a time of 22.11 in the wind for the win.

Palmyra's Alex Hoffsmith won the javelin with a throw of 175-7. State College's Griffin Thompson picked up where he left off after a big indoor season. The pole vaulter won his event with a 14-6 clearance, a PA#1.

Lake Lehman's Dominic Hockenbury got his 2016 outdoor season started off on the right foot. He won the 1600 in 4:22, a nice early season benchmark. He spoke with Don Rich afterwards. Watch that interview:

The field ruled the day at the 41st annual Altoona Igloo Invite. Richland's Ethan Dabbs put up a big PR and US#1 in the boys' javelin, throwing over 200 feet. It's a new PA#1 for Dabbs, who threw 204-2 for the win. It's a sign of big things to come in the event for Dabbs, who, by the way, is only a sophomore. Bedford's August Cook took second with a throw of 189-5.

Saint Marys Area's Tom Bojalad won both the shot put and the discus in a big day for him. Bojalad threw 178-7 for a new PA#1 in the discus. That's a massive PR for the junior and a great way for him to start of his outdoor season. He won the shot with a throw of 55-7, an outdoor PR and PA#4.

Tyrone's Erika Voyzey cleared 5-8 in the high jump for the win. She still sits at PA#1 after a huge 5-11 in a dual meet earlier in the week.

The javelin was a close matchup for the girls. Kane Area's Trinity Clark squeaked out a win over Adrian Page of Coudersport. Clark threw 122-9 to Page's 121-5.

Down in Delaware, the Penn Wood girls put down some solid performances.

The host team was well-represented at its home invite. Leading the way was hurdler Patrick Kimball. The Mount Lebanon senior put down a PA#1 in the 110 meter hurdles, running a time of 14.51 in the finals (he also ran 14.60 in the trials). That's already faster than Kimball ran last year, so it's a great start for him.

Mount Lebanon's Todd Gunzenhauser also ran the fastest time in the state in the 3200 meters in 9:41.00.

Greensburg Salem's Lawson Monta won a pair of throws events. He threw 168-7 in the discus and 56-7 in the shot put. Monta medaled in both events at states last year and his 2016 is off to the right start.

Notre Dame-Green Pond's Greg Lauray, who broke out with a huge PA#1 in the high jump in a midweek dual meet, jumping 6-10, followed up that performance with another win. Lauray cleared 6-8 for the win. 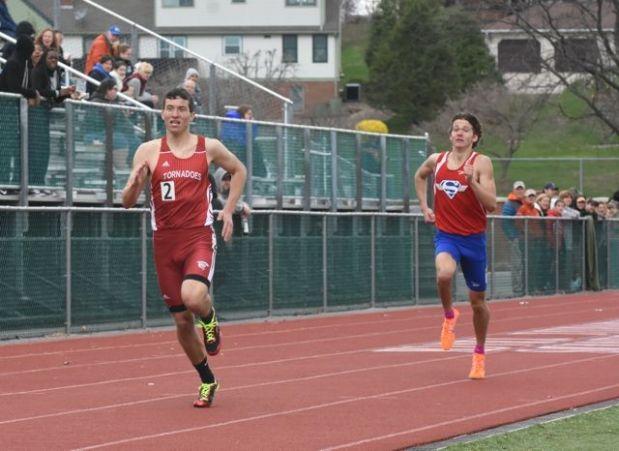 David Fletcher of Mount Carmel outlasted Brody Beiler of Selinsgrove for the win at the Selinsgrove Classic. Fletcher clocked a 4:21.30. That's currently the best time over the distance in the state. Beiler ran a 4:23.17 for second in the race and a PA#3. A good start to the season for both distance runners.

Williamsport's Qayyim Ali returned to the mat in an invitational for the first time since winning the indoor state championship. Ali cleared a PA#2 6-6 for the win, starting his season off well.

On the girls' side, Danville's Mackenzie Jones was a runaway winner in the 3200 meters, winning in 11:30.

Garnet Valley's Nina Gambacorta won a pair of throws events. She took gold in the discus (121-1) and shot put (37-8). The Unionville boys put down a PA#1 in the SMR, while the Phoenixville boys ran the fastes 4x1600m time in the state.The West Chester Henderson girls ran a PA#1 in the 4x1600m. 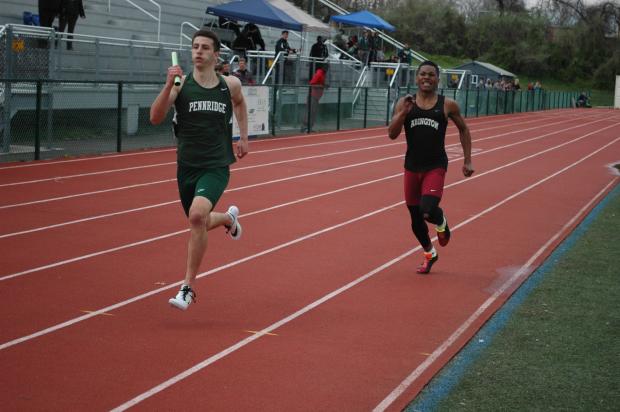 Pennridge's Austin Howell dropped a 48.3 split to lead his team to the win in the 4x400 (Photo by Dan Beck)

After the early rain, the skies cleared up and made for a great day of races and competition at Council Rock North.

Jake Brophy of Central Bucks East made his invitational debut, pulling off a successful double. Brophy started by anchoring the Patriots' winning 4x800 in a PA#2 8:01.44. Then the senior won the 3000 meters in 8:54.68, completing a good start to his outdoor season.

Harry S. Truman's Sayyid Saunders won both the 100 and 200 in just his second meet of his career. The sophomore topped a solid field in both races for the wins. He spoke with PennTrackXC afterwards:

Pennridge's Tucker Desko took out the 1500 hard and didn't look back, taking a wire-to-wire win in 4:02.17. Council Rock South's Joe Maguire was second in 4:05.20. Watch an interview with Desko below:

Hatboro-Horsham's Nick Marino cleared 14-0 to win the pole vault and CB East's Josh Goetz took the 5000 meters in 15:53. Holy Ghost Prep's Eric Kasperowicz won the shot put and discus. He PR'd in the disc and earned "Performer of the Meet" honors. he spoke with PTXC after:

The day ended on a high note as the Pennridge 4x400 hawked down Abington on the final lap. The Rams clocked a 3:22 for the win over the indoor states champs. They got a 48.3 anchor leg from Austin Howell. Watch the interview with the whole team:

The Hickory throwers put on a nice display at the Warrior Classic in Monaca. On the boys' side, Evan Blaire followed up his great indoor season with a great start to his outdoor season. Blaire won big in the shot and the discus. In the shot, he threw a PA#2 60-3.5 and then in the disc, he went PA#3 176-0.5. That's a very solid start to what should be a big season for Blaire. Hickory's Tyler Bishop took second in the shot put with a nice throw of 52-4.5.

Stroudsburg's Brittany Hewitt won the high jump with a nice early season clearance of 5-4, a PR and PA#3.

Mike Marsack of Stroudsburg threw a PA#3 in the javelin of 181-10. Marsack has thrown over 200 feet before, but this is a good start to the season for him.

Pocono Mountain West's Isiah Wiggins cleared 6-6 in the high jump. That puts him at PA#2.

Knoch's Jordan Geist smashed the outdoor state record in the shot put with a throw of 71.9.25. Read more on Geist throw in Phil Grove's feature from the meet.

Elswhere, Knoch's Brennan McTighe earned a pair of runner up finishes to Geist in the shot put (51-8) and the discus (154-8) making it a nice season opener for McTighe.

Moniteau's Maura Kimmel won both the shot put and the discus, starting her season off on the right foot. Kimmel's 142-7 is a PA#1 in the discus, while her 42-4.5 in the shot put is a PA#3. Kimmel spoke with Grove afterwards on her first invite of the season: