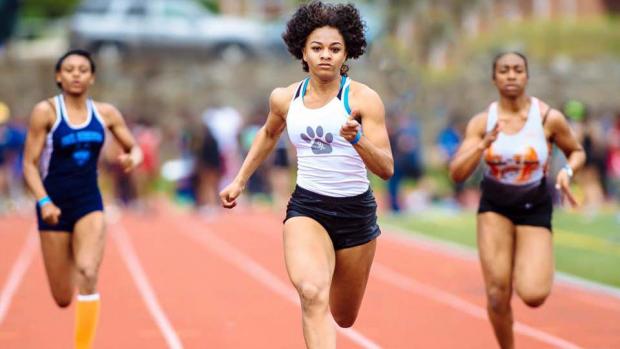 Next up in our Salute to Seniors series is Jameela Muhammad of Paul Robeson. The sprinter finished up and successful and decorated career and answered some questions for us, reflecting on her high school track experience. Stay tuned throughout the summer as we salute more of the graduating seniors that competed in their careers. Want to submit your own questionnaire? Click here!
What was your most memorable race/competition?
My most memorable race as the 4x4 at the 2015 PTFCA state championship. Not being a full time 400m runner had me terrified on whether we were going to win or not. I still watch the video of the race today because it was insane to watch my team go 3:54 and win the state title.
Where did you face your biggest competition?
My biggest competition was at the 2016 Hispanic Games. The finals was loaded between Kouri Peace, Jayana Webb, Dasia Pressley and Chanel Brissett. we all ran 7.12-7.19
Out of all of your high school accomplishments, which stands out the most?
My best accomplishment was breaking my 200 PR at the District 12 meet this year. Because of a nagging injury my 25.08 PR was standing since 2011 from a club track meet but was finally broken this year.
If you could do it all over again, what would you change about your athletic career in high school?
If i could do it all over, the one thing i would change about my high school career is not giving the hurdles a try. I use to practice them everyday, but became nervous when race day came.
What will you miss the most?
What I will miss the most is the bond that the Public League had in District 12. D12 isn't the most wealthiest or biggest district in the PIAA but we always made the best of what we had. D12 is like a family. You really get close with the coaches and athletes within the four years of high school. It's and unbreakable bond. 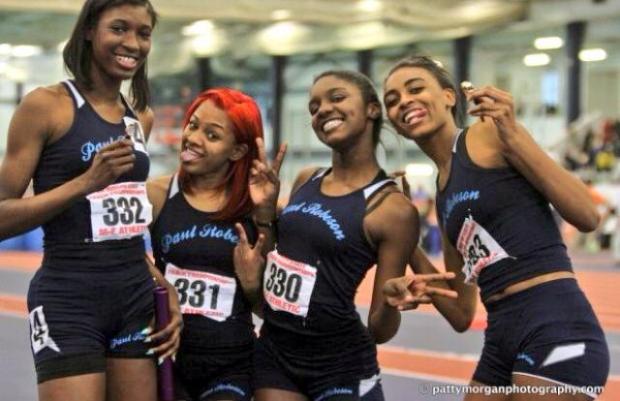 Do you have any advice for younger athletes?
Never let anyone's negative thought impact your performance. You're only as strong as you think you are so never let anything sike you out. Positive thoughts only.
How have your coaches influenced your performances and your life goals overall?
My coaches has a big influence on my performance and life because even though they received a check for coaching, that wasn't the reason they came out. They spent 5 days a week with us everyday after work because they wanted to. They loved the sport and i respect how they wanted to help me and my teammates get better. I showed out in my performance so they know I wasn't wasting their time. Them helping us influenced my life because it showed that "Money won't have an effect on what you love".
What are your college plans?
To attend the Academy of the Art University is San Francisco, California to major in 2D Animation.
Shout-outs?
Shout out to Coach Massie, Coach D, Coach Hawkins, Dean Lent and the rest of District 12. Going to miss you all!
Girls 60 Finals - Thelma Davies (Girard) 7.47 PTFCA Indoor State Championship Feb 28, 2016
G 4x200 F05 PTFCA Indoor State Championship Mar 1, 2014
G 4x400 F04 PTFCA Indoor State Championship Mar 1, 2014
Tweets by PennTrackXC