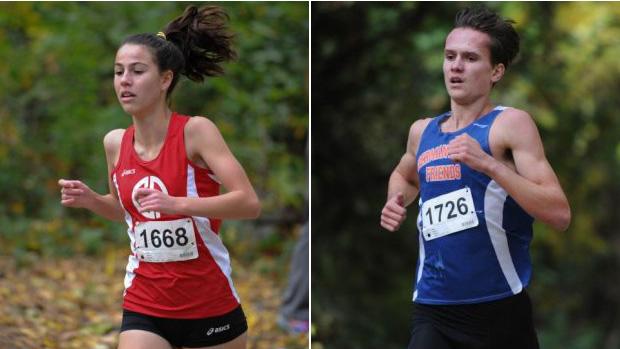 The 64th installment of the George School Invite will be a good chance to see some top individuals in the state early on. Germantown Academy's Abbe Goldstein (PA#2) will make her invite debut on Saturday. She had a busy summer, but this will be our first true chance to see how Goldstein's training paid off in the summer. Surely, she has her sights set on a state title and maybe a Foot Locker Nationals berth and Saturday will be her first test.

A few other big names will toe the line, as well. Holy Cross's Lexi Walsh (PA#25) was a BIG winner at her opener, the Northampton Invite, taking the victory in 18:33. Can she follow that up with another big performance. Having a star like Goldstein pushing her won't hurt.

Friends' Central's Gabrielle Wilkinson is slated to run as well. She had a monster summer that included a 4:25 1500 meters at the AAU Olympics. Can she translate that track speed onto the trails? Stay tuned for Saturday. Wilkinson's teammate Emily Burd is another one to watch out for. Villa Joseph's Marie's Katie Irelan will be another to watch, along with her teammates Brianna Kling and Caroline Brandt.

Like Goldstein above, Nick Dahl had a busy summer as well. He saw a great deal of Europe during the summer months, but the Germantown Friends' senior always managed to get his training in. After a strong performance at the Oakbourne Relays to open up his season, Dahl will make his 5K debut on Saturday at George School, where he's the defending champ. He's a heavy favorite to defend that title, as he starts his run for another state title and a potential Foot Locker nationals qualifier.

His GFS team is also favored to repeat at meet champs. They scored just 36 points last year to take the win. They graduated some talent from last year, but the always strong Tigers have a way of retooling each year. NJ's Timber Creek will look to pose a challenge.

Other individuals to watch out for are germantown Academy's Owen Ritz (a 4:21 1600 in the spring), Holy Cross's Andrew Healey (a very talented freshman), and George School's Jeffrey Love.