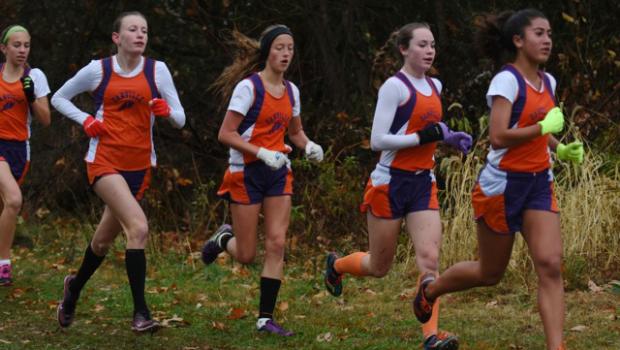 All Photos by Barb Krohn

BLOOMSBURG - The cold, wet and windy District 4 Cross Country championships at Bloomsburg University were not kind to runners seeking repeat as champions.

In boys A Northeast Bradford senior Casey Ellis beat a field that included 2015 champion South Williamsport's  Hunter Crawley and in boys AA Loyalsock's Quinn Serfass stunned a field that included Jersey Shore's Isaac Davis. The girls races were closer to form. In girls A Pennsylvania newcomer Isabell Sagar was as good as her ranking beating Warrior Run's Tori Ross, the 2015 champion and in girls AA pre-race favorite Ashley Blair won with one of the three elite times of the day. 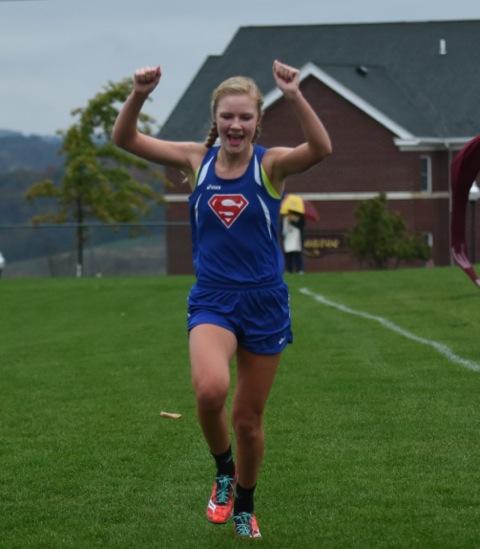 Blair's 19:19 pace was fast enough to bring Danville's Elaina Klinger and teammate Brittney Carnathan into the elite category as well. Klinger finished in 19:25 and Carnathan 19:36.

And it might well have been the conditions that led to Blair's time.

"It's so muddy - we were flinging mud around everywhere," said the Selinsgrove senior. "I love races that aren't normal."

Blair and Carnathan settled into a pace at the beginning of the race that Klinger was eager to hook her train to.

"(Danville) Coach (Jeff) Brandt said to go out with them," said Klinger. "They have this figured out."

"The first mile was pretty easy," said Blair. "We were pretty much in the pack mentality. At the 2 mile I took it out with Brit and Elaina."

The AA winner made her move in the last 800 meters, which meant pressing up a steep hill.

"Hills are not my friend but I'm mentally stronger," said Blair. "If I think I can do it, I will."

Klinger separated herself from Carnathan at the bottom of the same hill.

"It's definitely something I do better at," said the race's silver medalist.

The win was especially sweet for Blair who was wearing a boot at the 2015 district championships.

"I haven't run at states for two years," she said. "It makes all of it that much better."

And better still was that Selinsgrove's 1-3 finish propelled Blair's team to second place in the team competition.

"I wanted to cry when I found out we made it (to states)," she said. "It's so great to go on your own but to go with your team couldn't be any sweeter."

"I'm just so proud of my team," said Danville sophomore Marisa Maffei who was fourth. "We knew that we would have some competition with Selinsgrove."

Danville took second at states in the AA race last year and though standout Mackenzie Jones has graduated the Ironmen are shooting high once again.

"We definitely would like to do what we did last year," said Klinger. "But we'd be happy with either second or third." 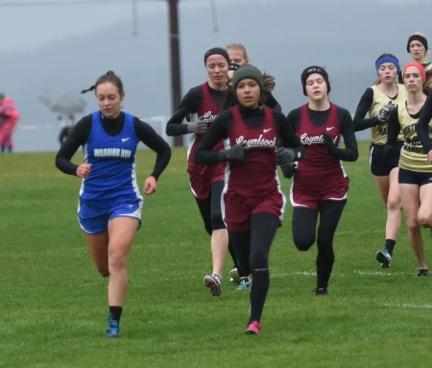 It wasn't all that long ago that Loyalsock would show up at regular season meets between other schools and throw a few runners into the race. The Lancers began competing in the district team competition in 2014. And even this year Loyalsock as a team did not compete in any invitationals prior to the Shikellamy Boosters Classic, which is really just the Heartland Athletic Conference championship.

Thursday Loyalsock produced the champion in both the girls A race and the boys AA race.

Sagar's strong showing at Shikellamy earlier this month, made her the pre-race favorite, but since moving to Loyalsock from the San Antonio, Texas area, everything has been a bit different.

"In Texas I lived in hill country," said Sagar. "But those aren't hills like they have here."

On the Bloomsburg University course the Lancers sophomore had to negotiate the infamous "hospital hill" twice.

"That hill back there - the first time wasn't so bad but the second time it was hard to push through with the wind and the rain."

The weather conditions though weren't unfamiliar.

"Actually at (Texas) states last year it was just like this. I did very poorly there - so I was nervous."

Ross went out with Sagar but the PA newbie lost her early.

Ross, after a poor showing a Shikellamy, was much happier with her race at districts, despite being unseated as district champion.

"It's all right," said the Warrior Run senior. "Last Saturday - it wasn't good.

"It's kind of emotional because I'm never going to have districts to race again."

Sagar agreed that the race is special.

"This is a great race," she said. "And I'm very happy with the district title." 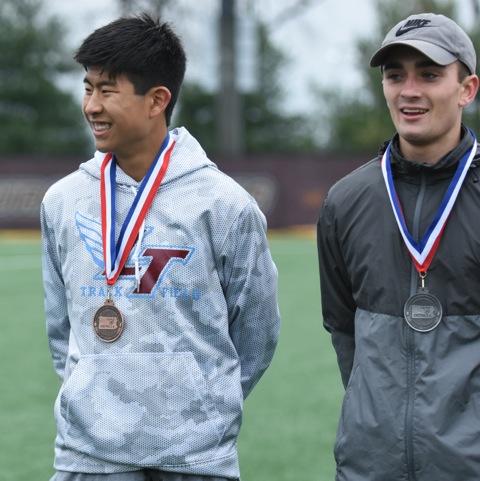 Having a teammate win was perhaps the extra push Loyalsock junior Serfass needed in the AA boys race where Jersey Shore's Davis was the heavy favorite.

Davis, Serfass and Milton's eventual silver medalist Tyler Leeser went out as a group of three. Serfass, who last year placed second in boys A was just going for postion.

"I did not expect any of that," said the AA gold medalist. "We have a very strong group of runners here. I though I'd get seventh or eighth."

But no one took it out faster than Serfass could handle.

"I knew Tyler had a very good kick so I wanted to make my move then - I just tried to keep pace.

"The girls race definitely got me pumped up."

And the showing for their school? 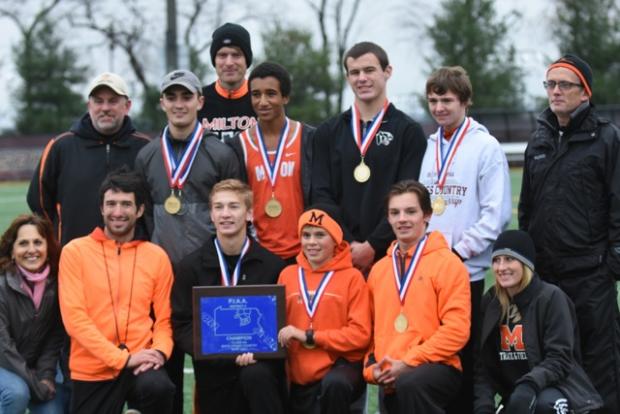 Leeser was already psyched from his individual finish when he found out that his team had edged Lewisburg for the team championship - a title Milton has not held since 1972.

"Taking second place is pretty nice," said Leeser. "But winning the team championship is so much greater."

Milton's coach, Tom Leeser, was definitely caught up in the magnitude of his team's moment.

"These kids deserve it," he said. "They've done everything we asked them to do and some of it was insane - but they did it and they believed in each other."

Milton beat Lewisburg 60-71 but the Green Dragons still advance to Hershey as a team.

"I went out with the two Lewisburg kids," said Kendall. "My goal was to beat them both. I hunted them down and got one.

"To come home with gold feels really good. At the beginning of the season it was a distant dream." 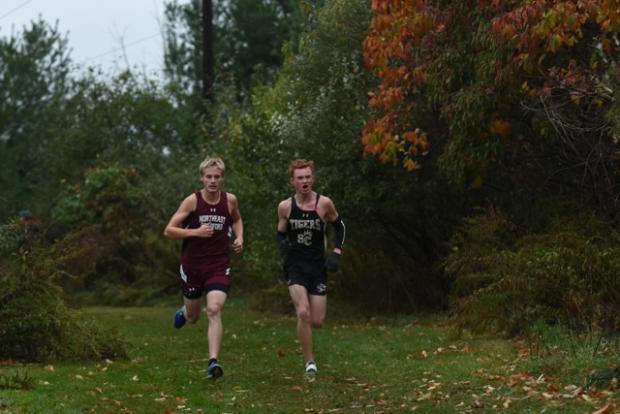 Northeast Bradford the class of A boys

Mark Northeast Bradford's Ellis as another runner that did not necessarily expect to be wearing an individual gold medal Thursday.

"I didn't start running until last year," Ellis noted. "But I knew I had a chance."

Ellis' plan was to go out with defending A champion Crawley. But Crawley, who didn't race at the Shikellamy Boosters Classic was not in the front of the pack. So he went with Southern Columbia' Ethan Knoebel and teammate Garret Smith.

"Knoebel took the lead so I thought, 'I'll stay with him for the first mile.'"

But the second time around the course he made his move and never looked back.

"It feels great," Ellis said of his title.

And even better when Northeasst Bradford won the team championship.

"We have a great tradition. Coach (Michael) Murphy has always had a lot of successful runners."