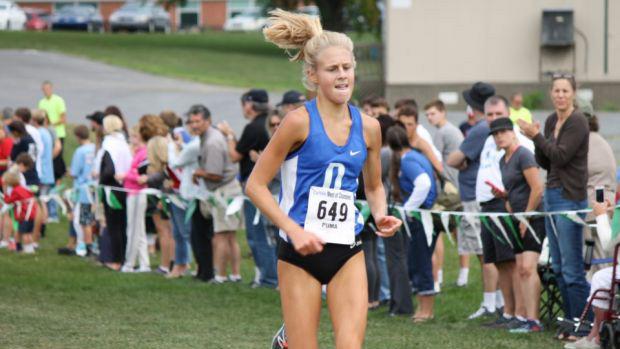 Three Pennsylvania girls will be headed to Portland for Nike Cross Nationals, while a few others had some near misses at the NXN Northeast Regional in Wappingers Falls, New York.

Downingtown West's Aislinn Devlin won the title for a second straight year. The senior ran a time of 18:09 for the win, defending her title. The Pennsylvania state champion will be headed back to Portland, where she was ninth overall and an All-American last fall. Watch an interview with Devlin below:

Those three girls qualified for Nike Cross Nationals, which will take place next weekend in Portland.

The Cardinal O'Hara girls took fifth place as a team, outside of the two automatic qualifying spots for nationals. The usual top girl for the AAA state champs, Olivia Arizin, had an off day as the Lions fifth runner. Elizabeth Mancini ran a great race for O'Hara placing 15th overall in 19:10. Christine Mancini was 42nd and Eleanor Mancini placed 51st.

In the boys' race, Council Rock North took third place in a very competitive race for the top two spots. Christian Brothers Academy from New Jersey won with 122 points. Staples from Connecticut was second with 132 points, 36 ahead of CR North, which had 168 points.

Ryan Campbell paced North with a 17th place finish in 16:24. Tim Haas was 25th and Bryan Keller took 37th for the third place team. They will need a wild card berth in order to qualify for next weekend's Nike Cross Nationals in Portland.

Cardinal O'Hara's Ryan James was the top Pennsylvania boy across. The senior placed eighth overall in 16:06, the seventh individual not on a qualifying team (the top five qualify for NXN). Winchester Thurston's Tristan Forsythe ran a great race to place 13th overall. The junior was third in Class-A at the PIAA State Championships earlier this month.

Stay tuned for interview, photos, and race videos on the way!