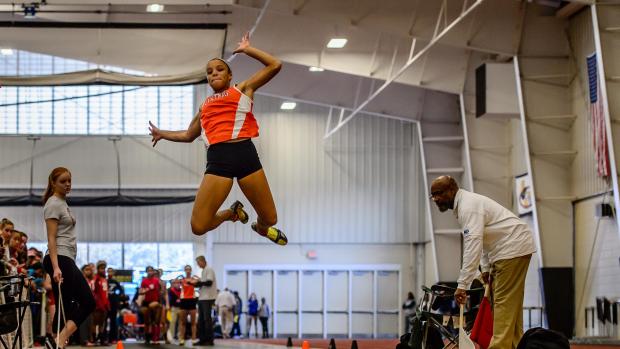 It was a long day of sitting around for Terrance Laird. But to say it was worth the wait when he finally got to compete might be an understatement.

The Coatesville senior only raced the 200 meters on Saturday at the Ursinus High School Open in Collegeville. In the timed final that took placed after the sun went down at 5 P.M., Laird made a huge statement to not only the state of Pennsylvania, but the entire nation. He clocked a time of 21.75, the nation's best time so far, and an incredibly fast time for a flat track (or any track for that matter). Consider Brady Gehret's 200 meter state record officially on high alert.

Watch an interview with Laird, who has some big goals this year, below:

Laird wasn't the only one putting down big performances in week one of the indoor season. Susquehanna Township's Yasmin Brooks looked strong in what was a very busy morning for the TCU-bound senior. Brooks won the 55-meter hurdles in a time of 8.10. The hustled over to the long jump where she placed third in a competitive battle. Then she came back to the track to win the 55-meter dash in a time of 7.36. That all happened within a span of about 30 minutes or less.

Brooks spoke with us afterwards about managing so many events, her love of the heptahlon, and her decision to attend TCU:

Perkiomen Valley's Christina Warren is into her sophomore season and already doing big things to start of the season. Warren won the long jump, triple jump, and took a narrow second to Brooks in the hurdles. Warren went over 18 feet for the first time indoors in the LJ, winning with a best of 18-2.75. Warren beat out Brooks and Madison Langley-Walker, who was making her debut for Upper Dublin and taking second with a jump of 17-9.5.

Warren then ran a time of 8.12 in the 55 hurdles, and then later in the day won the triple jump with a best of 38-9. Watch Warren's post-meet interview, where she says she looks to improve on her performances from last year:

Neumann Goretti's Janese Lynch remembers last year well. Lynch took a very close second in the shot put at indoor states to the great Emily Stauffer of Cocalico. But Lynch is on a mission in her senior year. She had a big start her season on Saturday, winning the shot put with a best throw of 45-4.5, not far off her personal best.

Germantown Academy's Kyle Garland looked smooth, winning the 55-meter hurdles. The junior clocked a time of 7.60, a great start to what should be a big season for Garland. He was also third in the shot put and sixth in the pole vault.

A new look Bishop Shanahan squad took first in the 4x200-meter relay. The team, which included new transfers Nate and Ian Alleyne, clocked in at 1:33.41 for the dominating win and PA#1. Shanahan's Logan Yoquinto won a great race in the 800 meters, outlasting Rustin's Brandon Hontz for the win. Nate Alleyne and Keegan Hughes went on to place second and third overall in the 400 meters. Yoquinto's winning time was 2:00.62. Hontz helped his Rustin squad come from behind to win the DMR earlier in the day.

Coatesville's Porsha Miles won the girls' 200 in a time of 25.66, a good start to her season. In the mile, Pennridge's Monika Brill out-dueled Lansdale Catholic's Kayla Connelly for the win. Brill's time was 5:18.99, a sign of good things to come this indoor season for the senior.

Dock Mennonite's Austin Kratz was second to Laird in the 200 meters, but he had a strong day even before that. Kratz won the long jump with a best jump of 21-6.25. He was fifth in the 55 dash and eighth overall in the 400 meters.

West Chester Rustin's Charles Dever beat out Kennett's Xavier Feliciano in the pole vault. Both cleared 14-0 to start off their seasons. Rustin also picked up a win from Connor Cummings, who won the shot put with a throw of 52-1.25.