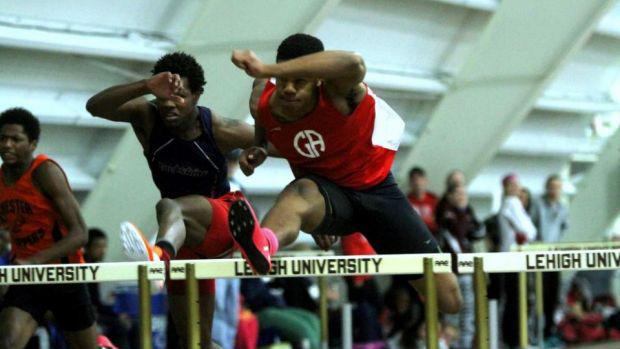 All season, there have been two names that have risen to the top in the 60 hurdles in Pennsylvania: Germnatown Academy's Kyle Garland and North Allegheny's Ayden Owens.

Garland lays claim to the top spot in PA after lasting an state-leading 8.00 at the TFCAofGP Meet of Champions this past week. Owens has a season best of 8.08. The two top hurdlers---from different ends of the state---will finally get a chance to face-off at states.

Garland will have a busy day with the long jump and high jump in addition to the hurdles. Owens is also entered in the 200 meters, but that will come after the hurdles. Nonetheless, we are in for a treat, assuming these two can both safely qualify through to the finals.

There are a few notable absences from the performance list in the hurdles. PA#3 Noah Swaby of Taylor Allderdice and PA#4 Dajone Averett of West Catholic are both not entered, so that will leave the door open for many other medal opportunities from the rest of the field.

A host of others will be in the running for one of those eight medal positions. Some of those hurdlers include: Pennsbury's Nasan Robbins (PA#7), Chester's James Jackson (PA#8), Franklin Area's Danny Dinh (PA#9), Souderton's Stephen Scott (PA#10), Penn Manor's Taraje Whitfield (T-PA#11), and the Haverford School's Sam Lindner (T-PA#11)