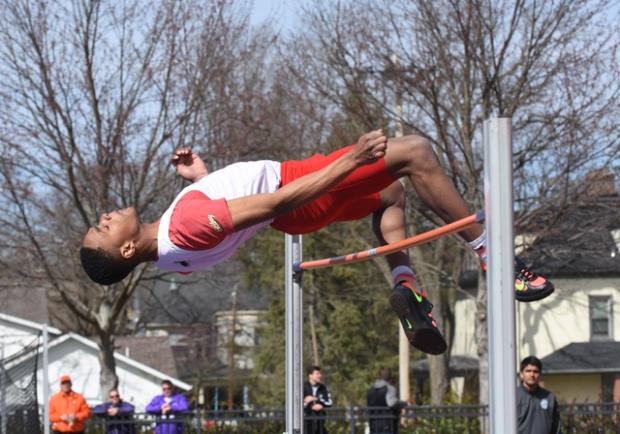 But the biggest noise Saturday was made on the field.

PA No. 1 boys high jumper Qayyim Ali backed up his 7-1 PR, set April 4 at a dual meet, with a solid 6-10 leap in less than ideal conditions. And on the university's Mondo javelin runway PA's No. 2, 3, 5, 10 and 20 girls throwers, led by defending Penn Relays and PIAA Class AA champion Maura Fiamoncini, amazed in what had to be the best javelin competition of the weekend.

Waiting for his event to get underway on Saturday, Ali talked about his many college options, "I'm just looking for a place that feels like home."  He also touched on his 7-1 jump Tuesday at Shikellamy Stadium.

"It was just good," said Ali of his incredible leap. "I was pretty loose. I had a nice warm-up and there was no stress."

Things did not set up as well for him on Saturday. Yes, there was wind coming at him, but the bigger issue was that he allows 73 feet for his usual 11 approach steps. At Susquehanna's facility that meant placing his mark on the outside lane of the track.

"The biggest (problem) is how the track is leveled to drain," he said. "I was going uphill."

His opening attempts were easily cleared and getting 6-10 on his third attempt by a decent margin, his coaches advised going for 7-0. On his final jump, he was oh so close.

Still, given the conditions and that a week prior his PR was 6-9, Ali was pleased with his performance which smashed the previous meet record of 6-4.

"I think it's pretty good," he said."I just cleared 7-1 for the first time Tuesday.

"It's a great jump, it's just not consistent."

If Ali can regularize his new-found height the PIAA Class AAA record may be in play. The current record of 7-0.75 was set in 1985 by Plymouth-Whitmore's Tyrone Smith. 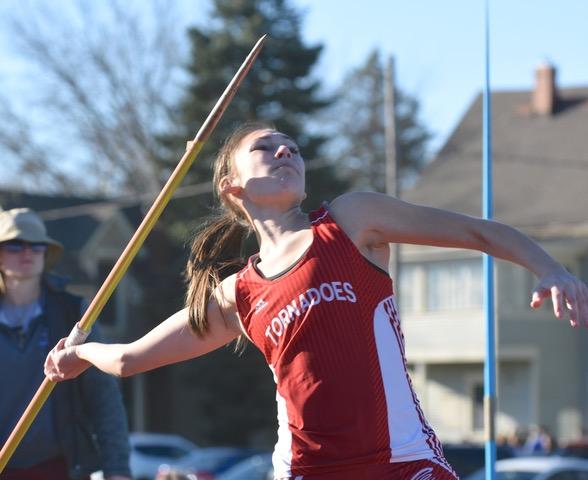 Fiamoncini and company astound in javelin

"Neither of us like to waste any time," said her coach Ana Ditchey. "We take advantage of every throw.

"We want to set the standard and work on improving it."

"Honestly I think it was nice to have some good competition," said Fiamoncini.

Officiating at the event Saturday was Susquehanna throws coach Chris Delbaugh, who was able to say with authority after Fiamoncini's PR hurl, "That is a new field record."

The previous record (155-8) was held by senior SU thrower, Gabby Alguire, who is a celebrated three-time All-American.

Also of note is that the Bucknell University-bound athlete's  would have also gone down as the second-best throw in Bison history, had Fiamoncini been wearing the Orange and Blue.

Regardless, the diminutive thrower is just focused on attaining her next goal, which has nothing to do with defending her Penn Relays crown at the end of the month.

"Right now I'm looking forward to hitting 160," she said. "I'm not worried about placing at Penn Relays, just setting my own PR."

And really just being able to compete with the best at Penn Relays is what it's all about. 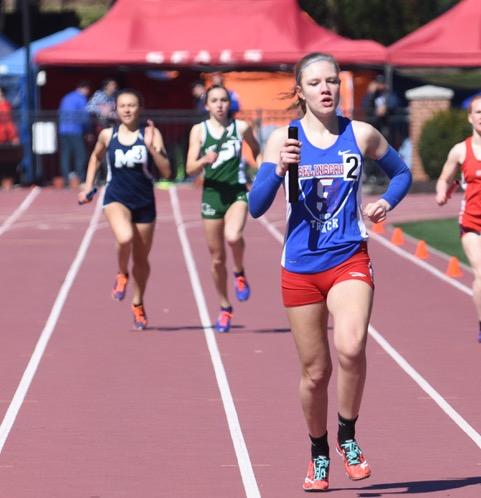 That was certainly the case for the Selingrove 1,600 relay team of Maikayla Carnathan, Sara Arbogast, Hannah Grove and Ashley Blair whose time of 9:47.21 was good enough to qualify them for the relay carnival.

It was only Blair's second relay race of the season, as the injury-prone senior had been held out in the earliest stages of competition this year.

By the time Blair got the baton, her team had set up so that the only thing she was racing was the clock. She responded with a 2:24 split, only four seconds off her PR.

"It's crazy to hit that close so early in the season," said Blair.

Arbogast, who ran second leg, gave her team the lead when she passed Lewisburg and Mifflinburg.

The fast track helped the Seals quartet meet their goal.

"Not to say (qualifying) was unexpected," said Blair. "But we didn't think it would be that easy." 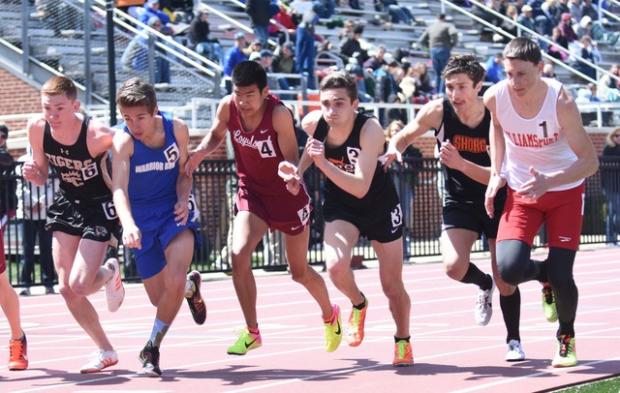 Milton junior Tyler Leeser took on a stacked 1,600 field Saturday and came away an easy winner.

"Before the race even started we knew there was lots of good competition," said the Black Panthers junior.

Leeser led the first lap but by the second 'Shore's Davis had nudged ahead. Drafting just behind the Bulldogs standout, Leeser made his final pass at the bell lap and took off.

Saturday was windy and everyone had to battle it in the back stretch but coming home the wind was with the runners and no one more so than Leeser who finished almost five seconds ahead of the field. Serfass edged Davis for second place.

Regardless, it's a time he wants to improve on.

"It's not where I want to be at the end of the season," he said.

With less competition in the 800, Leeser ran alone for much of the race finishing in 2:00 also good for PA No. 2 in AA.

His dad and coach Tom Leeser was pleased with the performances.

"For this part of the season he had a really good day." 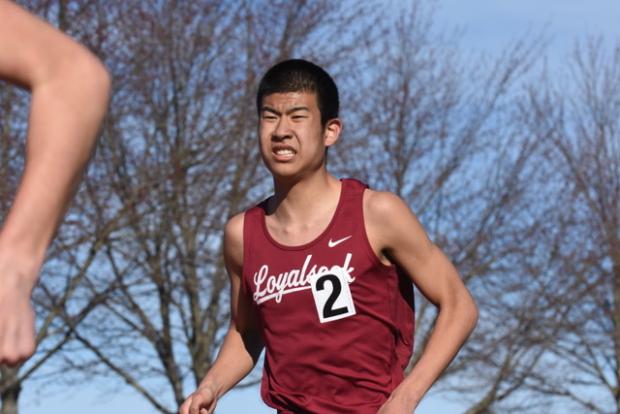 It wasn't that long ago that Loyalsock didn't even have a track team but the small school has quickly made its presence known.

On Saturday sophomore Charlotte Neylon surprised winning the 100 in 12.52, a new school record and a time that vaulted her into PA Class AA No. 2. Later in the meet she won the 200 in 26.00, which puts her No. 3 in the state AA field.

Sagar, who didn't run  any significant time in the event last spring due to anemia, was a little nervous before the 3,200.

"I was scared to get boxed in because that's what happened to me in the mile," she said. "The girls that were with me (in the 3,200) made me really nervous. 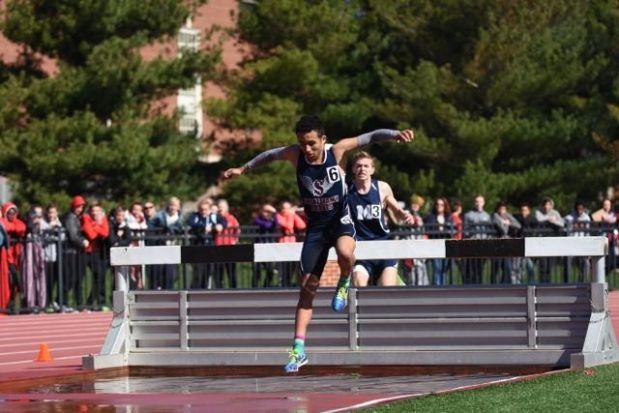 Steeplechase racers get their feet wet

Girls-side teammate Yoangelys Cedno took the win in the girls' race. Her 8:39.48 also gives her a PA#1 ranking.

For senior Cedno, the race was a way to complete something on her high school bucket list.

"I was just trying to start something new," she said. "I always wanted to do it, but coach had said no because I've had so many injuries."

And now that Cedno's tried it, she thinks she might try and pursue the event in college.

"I would most definitely be into it.

"I have to get better at the barriers but it's fun."