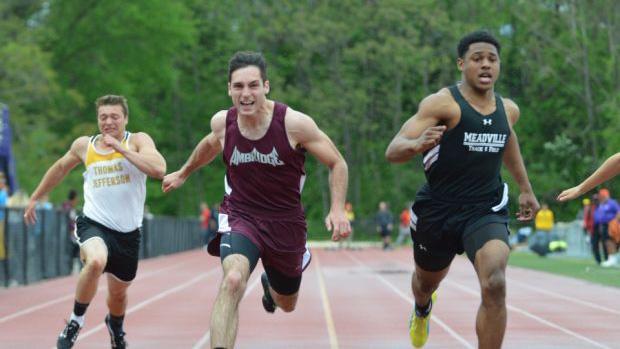 Meadville Area's Journey Brown showed off his midseason speed in the 100 meters. In a terrific finish in the finals, Brown held off his usual rival Isaac Elliott of Ambridge Area for the win. Brown ran a PA#2 of 10.67, while Elliott clocked a PA#3 10.68.

Quaker Valley's Zach Skolnekovich is fit. That much is for sure. The Quaker Valley senior won the mile in 4:14.00, complete with a strong kick leading him to the win. He then came back to win the 3200 meters with a great negative split after going through the 1600 in 4:50. His final time was 9:17, a PA#3. he remains the top AA runner in both events.

In a competitive 800 meters, Seneca's Donovan Myers was first across in 1:54.72, a PA#11. Kiski Area's Nick Gabrielli and Cathedral Prep's Derek Jones also dipped under 1:56 in a quick fast section.

Jordan Geist padded a couple of Baldwin meet records, with a few more remarkable series' to claim a pair of wins. Fof the fifth straight time this seson in an invitational, Geist threw in the 74 foot range. Geist's best came with a 74-9. In the discus, Geist tossed it 198-6 feet for the win and the Baldwin meet record.

In the shot put, Cathedral Prep's Cameron Landis was second with a PA#4 throw of 58-6. Hempfield Area's Alex Murray took third with a season best PA#8 heave of 56-7. In the javelin, which was pushed to Saturday at West Mifflin because of the weather, Elizabeth Forward's Daniel Jacobs took the win with a throw of 177-3.

The horizontal jumps were popping on Friday at Baldwin, as we saw state leading jumps in both the long and triple jumps. 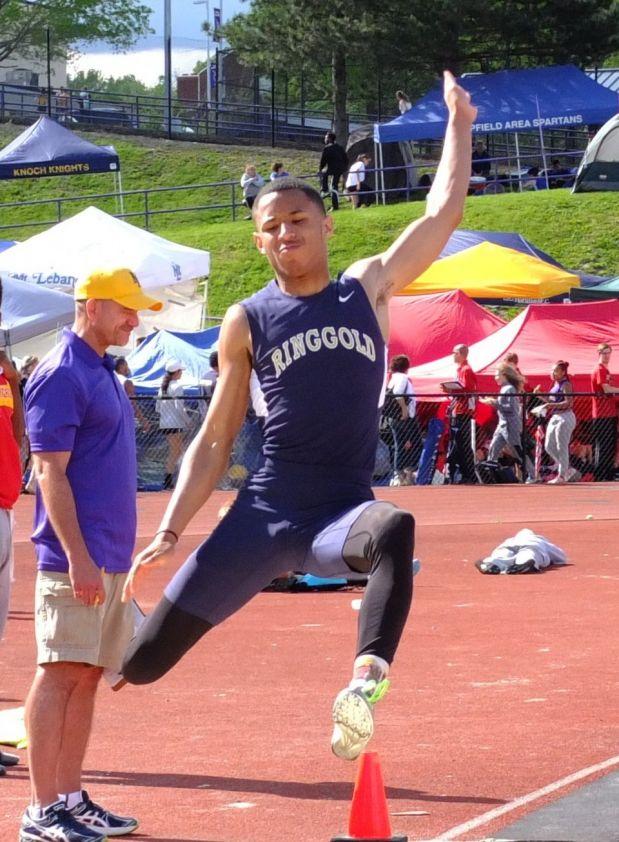 In the long jump, Rinngold's Brian Vandusen posted an invitational PR of over a foot! The senior went PA#1 with a leap of 23-3.5 (PA#1) for the win in a deep competition. Vandusen, who took seventh at indoor states is showing that he can certainly make a big jump later this month at outdoor states. Upper Saint Clair's Harvey Kane went long as well to grab second. The indoor state champ posted a jump a half an inch better than the won that gave him the title at Penn State with a jump of 23-1, which puts him at PA#2. NA's Owens took a break from the hurdles to pull out a leap of 23-0, which is PA#3. Yes, the top three jumps in the state all came at Baldwin.

New Brighton's Anthony Milliner had another big day on the runway on Friday, and he came away with the best jump of his career. Milliner, the reigning AA state champ jumped 49 feet to take the win and a new PA#1. Can the senior threaten the 50 foot barrier at WPIALs and states?

One of the most impressive performances came in the high jump, as Mount Lebanon ninth grader Mason Ventrone cleared 6-5 for the win. That puts him at PA#8 and US#9 for freshmen. In the pole vault, Hempfield Area's Hayden Fox and Baldwin's Dave Johnston each cleared 14-3 to tie for the win.