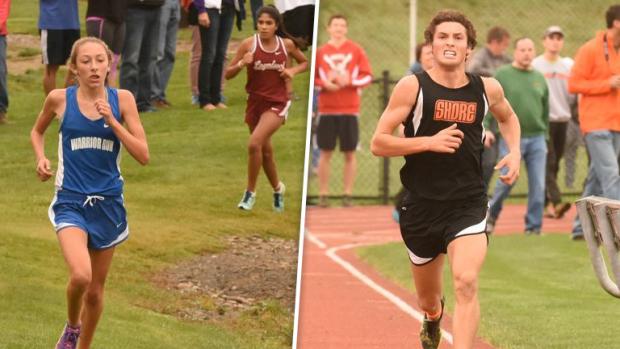 Both runners, though, were chasing history.

And though history - in the form of Lewisburg legend and PIAA Class AA champion Chris Spooner's 15:26.3 record set in 2003 and Lewisburg's PIAA Class AA 2008 champion Sophia Ziemian's 18:19 record set in 2008 - got the better of them both Saturday, Davis and Trapani now own the second fastest times on the course as they look ahead to the District 4 championships on October 26 at Bloomsburg University.

On the girls side Danville, once again running without one of its top five dominated the team competition beating Warrior Run 45-82. Loyalsock with a strong top-3 finish led by 2016 District 4 AA champion Quinn Serfass beat Warrior Run 91-102.

Davis on a mission

Davis was just a toddler when Spooner was making high school waves, winning the PIAA AA cross country championship as a junior in 2002, taking a commanding lead in the race in 2003 and when he collapsed due to heat exhaustion 15 feet short of the finish line, he first crawled then stumbled to a second-place finish of 16:04. In the spring of that year Spooner won the mile at Penn Relays and three gold medals and a bronze at the PIAA track and field championships. He and his teammates still hold the Class AA 4x800 record.

Saturday Davis knew none of that.

"My goal was to go for the course record," he said. "Gotta give it a shot."

Davis' time of 15:39 Saturday was a new personal best, in what has so far been an undefeated season. The Jersey Shore senior laid down an impressive 16:01 in the PIAA Foundation Blue race in September and won the Big Valley Invitational with a 15:54 at the beginning of the season.

Looking ahead the 'Shore runner is casting aside any doubts that may be lurking from last year's disappointing sixth-place finish.

"I just gotta give (the championship) a shot and just not count out any of my competitors.

"I have to go in and run my race. If someone beats me they beat me."

Saturday though Davis trounced the Lancers senior who took second place in 16:57.

"I thought I'd go out with (Davis) and see how I (felt)," said Serfass. "I thought maybe I could hold my ground a little but it just got worse and worse and (then) mentality (got) into it."

Serfass' disappointment though was brushed aside as the rest of the field began making up ground.

"I heard guys coming the last mile and I thought, 'All right, just hold it together.'"

Knowing he has a faster race in him, he is looking forward to the District 4 AA race which should also include Milton senior and PTXC9 winner Tyler Leeser who has been out for weeks with an injury.

"I need Tyler to show up," said Serfass. "With the three of us there it should be a good race.

"I'm really excited to have the three of us at districts - bring the family back.

"I love running with these guys."

Regardless Serfass will be trying to help Loyalsock bring home the team title.

The young Loyalsock program will look for its first district title on October 26, with Serfass and strong 2-3 runners Ryan Sullivan and Alejandro Quintana leading the way.

Saturday Sullivan and Quintana came across the finish line with two other runners all with a time of 17:11.

"I was hoping for a good race from myself to help the team," said Sullivan who took fourth. "We were looking to score.

"It's really nice to do well here because there are a lot of teams here from the district.."

"Today I tried to focus on placement as a team," said the sophomore who was running the Shikellamy course for the first time.

"It was really fun. I liked the little slide down the (dike). I slid on both my heels. I liked the flatness - it's easy to see where everyone is."

While the Shikellamy Boosters results should give Loyalsock and Warrior Run some comfort in terms of qualifying as a team for states, reality is that the two slots are up for grabs.

The addition of Milton's Leeser in the district race could change things around quite a bit and the other teams know it.

"AA districts in going to be very tight," said Warrior Run coach Corey Dufrene. "There are six or seven teams that on any given day could go." 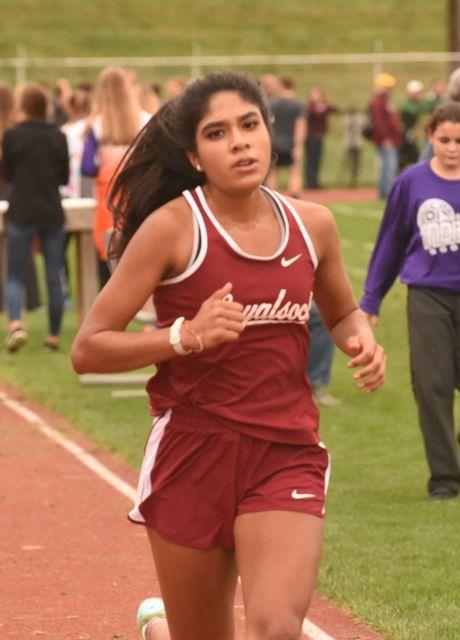 The record Trapani fell just short of Saturday was set by a runner that could not have been more different than the Warrior Run freshman.

For one Ziemian, who is now pursuing a doctorate at Cornell, set it her senior year as the hard work she put in throughout her high school career pushed her to the top of the state.

Trapani, who trained with the Warrior Run boys all summer, is also known as a hard worker - one who from the start of her middle school career to present has only lost only one race in the state.

"I think she took a wrong turn on a course when she was in seventh grade," said Warrior Run middle school coach Scott Hoffman.

Ziemain said she had a recollection of Trapani from a middle school meet at Lewisburg last year.

"There was this girl who finished two minutes ahead of everyone else," she said.

The Warrior Run frosh had a preview of the matchup as the two raced at a quad meet four days prior where Trapani beat Sagar by almost 90 seconds. Still, the undefeated runner was taking nothing for granted.

"I'll probably be racing her in the future," said Trapani alluding to the upcoming district A meet. "I want to be ready for that."

Saturday Sagar was ready for Trapani pace at the beginning of the race.

"I was trying to go out harder than last time," said Sagar. "She's great. She takes it from the beginning. It's hard to stay with that pace, especially the first mile."

Largely though, Sagar did at least through the first mile. And in going out hard she distanced herself from the rest of the field so when she fell off Trapani's pace she found herself running alone.

"I was kind of in no man's land. I like the competition it pushes me."

Trapani for her part is planning to keep doing what's been working for her since seventh grade - go out hard and keep it consistent.

"I guess I started doing that in junior high," said the freshman. "I tested it (again) at the beginning of the season - since high school is different - and I pretty much kept with it."

The shy standout said does her best not to think of what she has accomplished so far.

"I try to make myself forget," she said.

But she is looking forward to her first district meet on the Bloomsburg University course she has already concurred once this season.

"I'm looking forward to districts. I hope our team can do well there."

Made up of six freshman and one junior Warrior Run is favored but will have to contend with Troy, the 2016 district champions.

The Defenders youth does give their coach pause.

"I would be lying if I said that I wasn't concerned," said Dufrene of his team's youth. "But they've got to run well, and they've got to understand that." 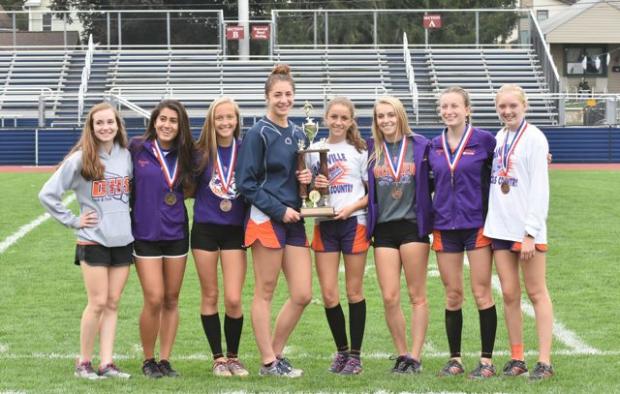 When Danville won the Northeast Invitational at the end of September it did it without the services of one of its top runners - Elaina Klinger.

Saturday Klinger was back but another top runner - Marisa Maffei - was home with an illness. No matter.

"She was ahead for most of the race," said Mikita, who finished third with a PR of 19:43. "I felt like I saved some for the whole race so when I got on the track I just picked it up."

Klinger said Saturday was about stepping up in Maffei's absence.

"We have each other's backs," said the fourth-place finisher. "We're able to step up for someone else."

"Like the Northeast Invitational everyone pulls through," said Haas who finished ninth.

Danville coach Jeff Brandt said, "This is our best race of the season.

"When we get everyone together, it's going to be impressive." 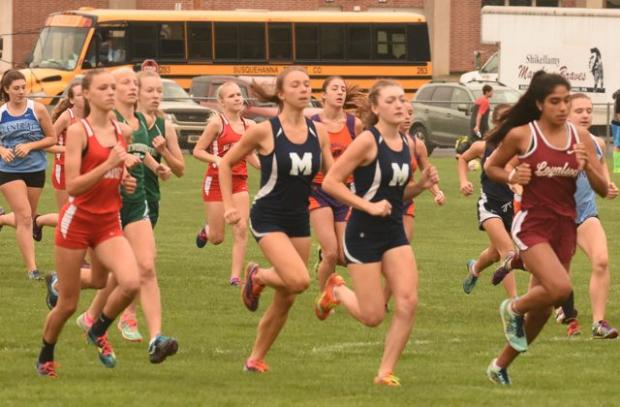 With no defending champion in the race and various district runners excelling at different times in the season, there is no clear favorite in the girls AA race.

Odds would favor one of the Danville runners. The Ironmen's strong grouping certainly should give them confidence.

Dark horses are Mifflinburg seniors Audrey MacPherson and Jillian Miller who took fifth and seventh Saturday and have the fastest times in the district albeit times run at the beginning of the season.

"I feel like the Danville girls are so good this year," said MacPherson. "I want to go out with them and see if I have anything left."

Miller, who has struggled to break 20 as of late, is hoping for a good day on October 26.

"Racing has been a little tough lately," she said. "Today I was able to push a little harder. It was great to run with everyone - we're all friends."

Surprised when it was suggested there was no clear district favorite Miller said, "I guess it's anyone's game - whoever has the better race that day.