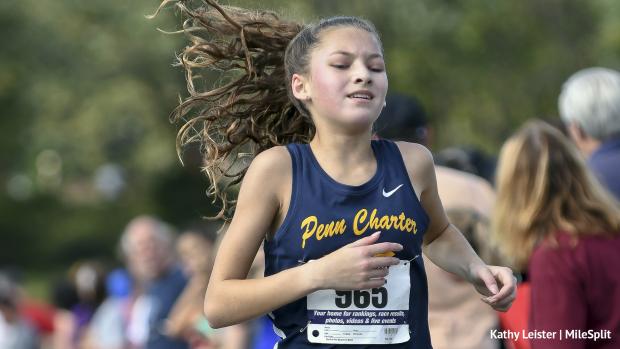 Germantown Academy's Abbe Goldstein left big shoes to fill in the PAISAA after she graduated this past spring. But the ones to fill them may actually be a pair of newcomers.

The Friends League champ and the Inter-Ac champ, whose times were only separated by less than a half a second on the same course at those respective league championship meets will go head-to-head for the first time this year.

In one corner there's Penn Charter's Emma Zwall, who has made a big impression as a ninth grader this year. She won the William Tennent Invitational in 18:15 and then ran 19:15 to win the Inter-Ac title this past Monday.  She'll look to win the PAISAA crown on Saturday.

But in the other corner is Germantown Friends' Annika Marcelis, an eighth grader, who caught practically everyone by surprise by winning the Friends League title in 19:14 last week. Could a middle schooler steal the show in the PAISAA? This won't be a matchup to miss out on.

One we can't forget about is Friends' Central's Rebecca Wusinich. She won the George School Invitational and actually beat Zwall earlier in the season. She's an aggressive racer, so expect her to be in the mix for the win on Saturday.

Now onto the team race, which will be interesting. If we merge both the Friends League Championship and the Inter-Ac Championship (both run at Belmont Plateau), the team scores play out such that Germantown Academy (the Inter-Ac champs) take a narrow win over Friends' Central (Friends League champs) and Penn Charter (second at Inter-Acs). Germantown Friends would take fourth in this theoretical league merge.

Take a look at our math below:

Of course, a lot can change when these teams toe the line on Saturday. The key for Friends' Central and Penn Charter will be moving its fifth runner closer to its fourth runners. Depth worked to Germantown Academy's advantage on Monday, so it will try and convert that into its second PAISAA title in as many years.