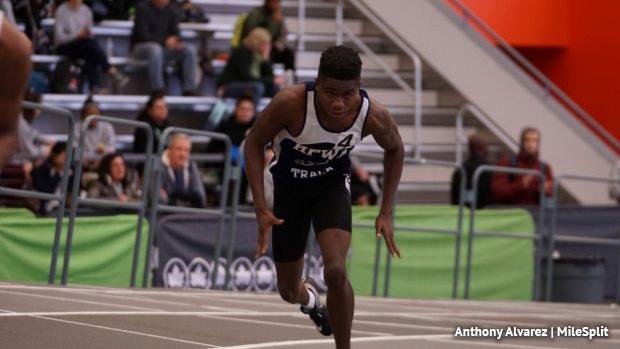 At the top of this field is Penn Manor's Taraje Whitfield, who sits at PA#3 in the 60 meter hurdles. Whitfield went 8.16 at F&M a few weeks ago and just keeps getting better. His best challenge will come from Owen J. Roberts' Scott Honicker (PA#3 55mH), Chester's James Jackson, and West Chester East's Charlie Webb.

The race for the medals in the 60 meters at indoor states this year will be fierce with plenty of highly-ranked sprinters not separated by much. Saturday could help us clear some things up. Springfield (Delco)'s Philip Shovlin (PA#4) leads the field into Saturday, but Hill-Freedman's Armonte Paulk (PA#4 55m) Cohen Russell (PA#7), and George Washington's Edner Dorwil are among some big names in this field. Just getting into the finals will be no small task.

Paulk and Shovlin headline this field in the one-lapper. It's a flat track, so the times might not stack up with the banked track times, but we could still see some quick times here. Look, also for Conestoga's Lex Forge, a talented sprinter that is also entered.

Paulk from Hill-Freedman is the top seed in the 400 (he's also entered in the 60 and the 200, so we'll see if he tries the triple). He's the only sub-50 boy in this field. But don't count out Chester's Malachi Langley, Reading's Jean Philistin, Penn Wood's James Nmah, and Lakeland's Cyril Babcanec in this race.