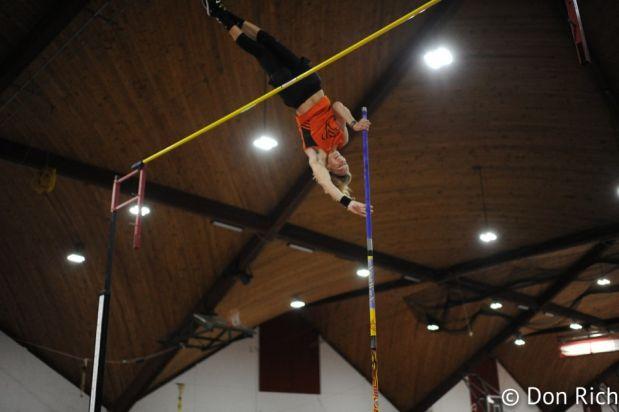 A trio of boys have separated themselves from the pack in the pole vault this season and it will make Sunday's state meet one of the can't miss events of the day.

The state leader for much of this season has been Payton Morris of East Pennsboro, the runner-up at indoor states last year. Morris has earned nine wins on the season. At the Millrose Games, he really broke through clearing 16 feet for the first time in his career to take the win (16-0.75). He then jumped 16-0 and 16-1 in his final meets of the season, showing he's on top of his game at the right time.

Morris is the favorite, but he'll have a few challengers for the win.

Joe Jardine of Schuylkill Valley, meanwhile, has seen a big improvement this winter. He won at the Kevin Dare Invitational at Penn State and then jumped 16-0 a few weeks ago. Charles Dever of West Chester Rustin has consistently jumped over 15 feet this season. His best of 15-9 came at a TFCAofGP meet a few days after Millrose. Morris, Jardine, and Dever recently matched up against each other at the PTFCA Carnival, with Morris and Jardine both jumping 16-0; Morris took the win on attempts.

Two others have jumped over 15 feet this season. Caleb Johnson of Germantown Academy took third last season as a member of Phil-Mont Christian's team. The GA transfer has performed well at the Armory this season and most recently posted a PR of 15-1 at Lawerenceville. State College's Luke Knipe put down a big PR of 15-0 (his indoor best by over a foot) at a home meet last week. Both will look to contend for the win with big days.

Hershey's Dalton Burnham, Altoona Area's Tyler Delozier, and Butler's Jack Codispot are among the others that will be battling for medals on Sunday in this strong competition.