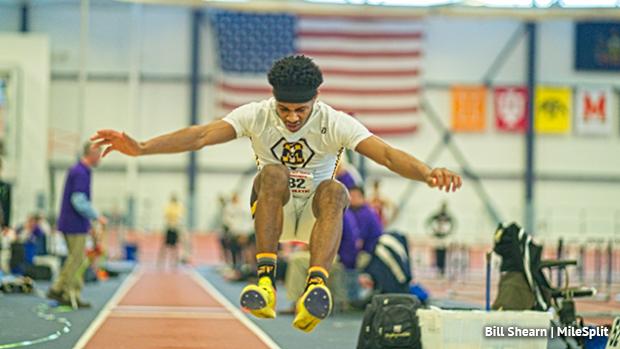 The boys' triple jump was one of the highlights of the day at the PTFCA Indoor State Championships. It was a competition that saw the lead exchange hands multiple times and one that got the crowd involved. On his final attempt, Milton Hershey's Treyvon Ferguson took the state title with a jump of 48-10 his indoor career best. Harrisburg's Jakari Lomax also pulled out a big leap, a career best of 48-7 to take second. Imhotep's Akeem Cooper placed third with a jump of 48-1.25.

Payton Morris of East Pennsboro was on his 'A' game on Sunday in the pole vault. The senior was clean all the way through 16-0. He had a few good looks at 16-6, which would have been a PR and meet record, but it was still enough to take the state title. Germantown Academy's Caleb Johnson had a big day, too. Johnson posted an 11 inch PR, clearing 16-0 to take second place.

George Washington's Edner Dorwil came away with the win in the long jump, edging out NA's Owens in a very close competition. Dorwil jumped a PR of 22-11.75 to take the win, just a quarter inch better than Owens. It was Dorwil's fifth time jumping past 22 feet this season in five competitions.

Kolt Byers of Bermudian Springs pulled off an upset in the high jump. The sophomore entered the competition with a season best and PR of 6-4. But he put down the best jumps of his life and cleared 6-6 on his way to the state title.

Bradford Area's John Eakin took home the win in the shot put. The senior showed some good progression all season long, culminating with a big PR throw of 57-05.75. Eakin, who was sixth at outdoor states last season, always knows how to bring his best on the right day.