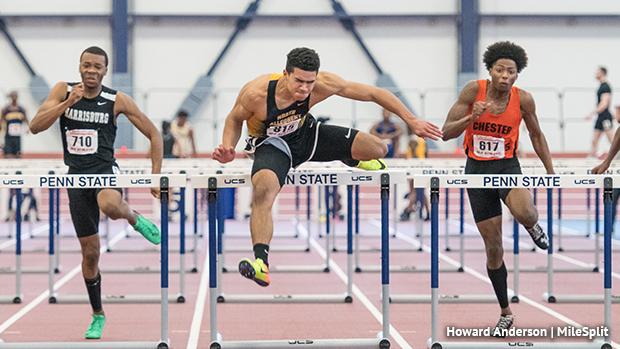 Austin Kratz of Dock Mennonite had a big day in the sprints. He broke the overall state record in the 200 meters a few weeks ago and he kept that momentum rolling into Sunday's state meet.

Kratz broke Journey Brown's 2017 60-meter dash meet record in the semifinals, running 6.73 to qualify through to the finals. In the finals, Kratz went 6.75 to capture his first indoor state title in the finals. Kratz returned in the 200 meters and dropped a 21.09 for the win against a talented field.

North Allegheny's Ayden Owens had a big day. Owens won the 60-meter hurdles in 7.74 to break Wellington Zaza's 2013 meet record. Owens entered the meet at US#2 in the event. He later took second to Kratz in the 200 meters in 21.39.

Miles Green of Saint Joseph's Prep got his state title in the 400 meters. Green ran away from the field to win in 47.93, a new indoor PR for him. He was second to Nate Alleyne by just .03, so he had plenty of motivation this time around. Bishop Shanahan's Rick Zink took second in 48.54.

Josh Hoey scratching from the mile and 800 meters in favor of breaking the national record in the 800 in Boston sent shockwaves through the state on Sunday. It also meant the door was open for a big performance from someone else.

Liam Conway of Owen J. Roberts seized that opportunity. The senior used a big kick to power home to the win in the mile to start his day. He ran 4:15.26 for the win, while Butler's Noah Beveridge clocked a 4:16.01 for second. Conway then came back in the 800 meters, unleashing his kick once more to take the win in 1:53.51. Ephrata's Tyler Shue, one of the meet's revelations, took second in an impressive 1:53.85.

Rusty Kujdych of Neshaminy followed up his XC gold with another gold medal on the indoor track. Kujdych wore down the field and pulled away a bit after the midway point to win the 3,000 meters. The senior ran 8:30.88 for the win.

In the 4x800-meter relay, Central Bucks West ran away with the win. The Bucks ran 7:52.55 to take the victory, following up their victory from outdoor track last spring. Ephrata took second in 7:57.37.

Seneca Valley went all in for the distance medley and it paid off. The Raiders went 10:21.72 to take the win, holding off second place Spring Ford and third place Central Bucks West.