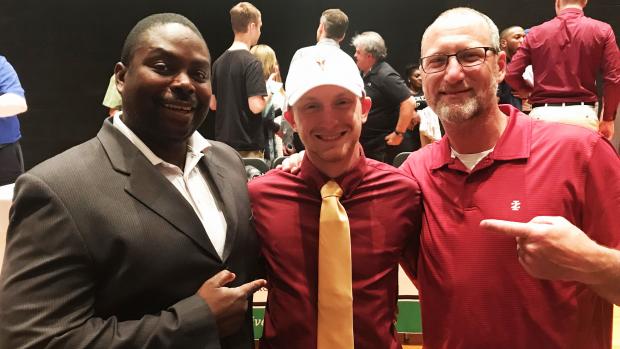 One of the nation's last top remaining recruits has officially signed.

After a strong indoor season, Kratz took his visits to those schools.

"With ASU, I loved the weather, (and) coach West and coach Smalls are amazing guys and great people," Kratz said. "The campus felt like home. It was really hard, but once I decided there, I knew it was the right choice."

From the start of the process, Kratz says he wanted a "family feel" and he found that in Tempe. The year-round warm temperatures were also a factor for the sprinter from the northeast.

"I love the warm weather," he said, considering the conditions athletes from Florida or Texas train in all the time. "I'm happy I can go into the winter and it's going to be 60 degrees and I can still wear a T-shirt."

Ultimately, waiting to commit to a school turned into a positive for Kratz, who improved in leaps and bounds since his junior season. He did two visits in the fall but still wanted to get back on the track before making any decisions.

"I really felt like I was getting better over the offseason and I could run really well," Kratz said. "Going into the winter season, I started to PR every meet, so I started having a lot of schools contact me. I wanted to make sure I weighed all my options."

Kratz is in the midst of a historic senior season. The sprinter won PTFCA indoor state titles in the 60 meters and 200 meters. He went 21.01 in the 200 meters for the win at New Balance Nationals Indoor, setting the PA state record. He started his outdoor season off with wind-legal wins at the Arcadia Invitational in the 100 (10.34) and the 200 meters (20.74).

So Kratz is ready for even bigger things in the final months of his high school career now that the "tiring" college selection process is in the rearview mirror.

A whirlwind May begins on Thursday for Kratz at the Helman Memorial Invitational, followed by Friday's Hoka One One Henderson Invitational. Then it's into leagues, districts, and states season. But Kratz and his coaches Tim Eger and Rohan Grant confirmed he'll race at the adidas Boost Boston Games the day after the PIAA District 1 Championships, which could mean a matchup with Anthony Schwartz of Florida.

Wednesday was about putting pen to paper for Kratz, a future Arizona State Sun Devil.