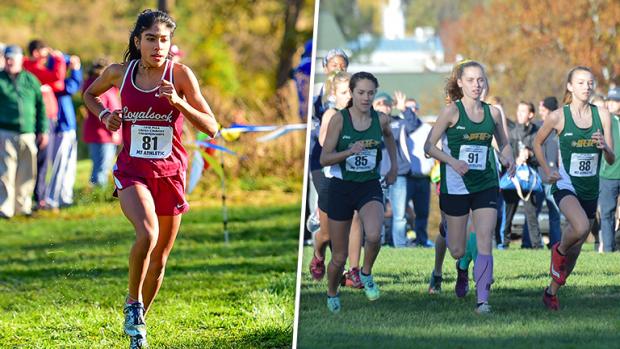 The first race of the day saw the course at its wettest as overnight rain, muddied an already sloppy course. There were runaway wins on both the team and individual side, starting off a busy day on Saturday morning.

As expected, it was all Isabel Sagar in the 1A girls' race. The Loyalsock Township senior rolled to the win to start the day on a wet and muddy Parkview Course.

Sagar, who noted she had been battling some sickness this week, didn't worry about time as much, particularly considering the course conditions. Instead, she gradually pulled away from the field and left no doubt about it in the end.

Sagar ran 19:12 for her first career state title. She moved to Pennsylvania as a sophomore from Texas, and has improved every year, leading up to Saturday's state title.

Lauren Shaffer of Portage Area was a surprise second place finisher. The freshman was second in District 6, but brought her best to Hershey, clocking a 5K PR of 19:51. Wilmington's Grace Mason ran well to take third in 19:58, while 2016 1A state champ Sera Mazza of Saint Joseph's Catholic Academy was fourth in 20:15.

The team that took home the title on Saturday was the squad that was most consistent -- no small task on a sloppy morning course. That team was Marion Center Area, which brought home the school's first PIAA state title in any sport ever on Saturday.

The senior, MacKenzie Walker, delivered the spark up front for MCA, medaling in 19th in 20:53, and freshman Nevada Armstrong was 31st in 21:17. Alyx Cornetto was 58th in 22:00, closely followed by Micaylee DeHaven (65th) and Lilly Ryer (89th). No team was close to the power of Marion Center's 3-4-5 that powered the team to a decisive 1A team with with 96 points.