Bothell, WA (June 28, 2011) – “Leads by example,” “totally dedicated” and “the glue that bonds her team like no other.” This is how Coach Amy Pitzel’s community in Katy, Texas describes her. As of today, they can add “2011 Brooks Inspiring Coach of the Year” to the list.

As the award-winner, Coach Pitzel receives $12,500 in cash and Brooks performance gear for her school. She also got an invitation for two to attend the 2012 Brooks PR Invitational, a national track meet where the fastest high school runners compete against one another and chase their personal records.

“All athletes recognize their coach was one of the most influential people in their lives,” said Jim Weber, president and CEO of Brooks Sports, Inc.  “Many don’t often realize the same coach willingly sacrificed personal time and resources to build a better program.  Brooks is proud to recognize and reward the coaches who inspire people to run and be active, ensuring their teams achieve both athletic and personal greatness.”

Brooks Sports, Inc. created the Brooks Inspiring Coaches program in February 2011 to identify and honor coaches across the nation who go above and beyond to build and keep their programs strong, make a lasting difference in the lives of their athletes, and inspire everyone in the community to run and be active. Like her students, Coach Pitzel also had an inspiring coach who helped shape who she’d become: “My cross country and track Coach inspired me the most in high school. She saw potential in me that I did not see in myself.”

Coach Pitzel was chosen not just because of the confidence, focus and spirit she instills in her team every day, but also for how she led them through any community’s worst nightmare: An athlete fatality during practice due to undetected health issues.

After the tragedy, though the students were devastated, scared, and shocked, Coach Pitzel helped bring the team and town together. She organized a community-wide memorial service at the track with more than 300 in attendance, made T-shirts for the team in the athlete’s memory and supported her team’s decision to run at a meet the next day, wearing black arm bands in their teammate’s honor. The result? Despite their grief and exhaustion, the team delivered an above average performance, placing at every level.

“I am so honored to be chosen by Brooks as the 2011 Most Inspiring Coach,” said Coach Amy Pitzel after receiving her award. “I am inspired every day by my athletes to be a better coach, teacher, and person. To see each grow and excel during their high school careers and beyond touches my heart and makes me want to work harder every day.”

Coach Pitzel was among an impressive group of 10 finalists, the remaining nine who were also honored by Brooks last night. 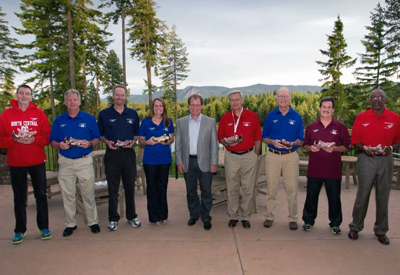 Each of the Inspiring Coaches finalists will receive $5,000 in Brooks performance running footwear, apparel, and accessories, $500 in cash for additional team expenses, and membership into the Brooks Inspire Daily (I.D.) program.  The Brooks I.D. program is an invitation-only influencer group with members who are active in their running communities and share a passion for the Brooks brand.


About Brooks Brooks Sports, Inc. is a leading running company that designs and markets a line of performance footwear, apparel, and accessories in more than 60 countries worldwide. A subsidiary of Berkshire Hathaway Inc., Brooks was founded in 1914 and is headquartered in Bothell, Wash., near Seattle. The company’s mission is to inspire everyone to run and be active by creating innovative gear that keeps them running longer, farther, and faster. Visit www.brooksrunning.com for more information, and follow frequent brand updates on Twitter (@brooksrunning) and Facebook (Brooks Sports).