It is nearly four am in Edinburgh and I finally get to lay down and prop my legs. Now I have to figure out where to begin... I followed my usual routine, and I think this is going to be the point of emphasis for this entry. It can be so easy to get caught up in the chaos of travel, being in a new place, surrounded by new people, and the weight of the USA jersey can be very intimidating. Overall, big events like this often tend to cause immense amounts of uncertainty and can be quite overwhelming. The night before the race, during the team meeting, i talked about the importance of sticking to your own personal warm up routine. When traveling like this, we have very little control over our usual daily routine and are out of our comfort zone. So, one thing that is controllable and brings comfort and confidence is having the ability to follow the usual pre-race rituals. I talked about this again to the senior women during our warm up where we all started together and then split apart as routines fell into place. 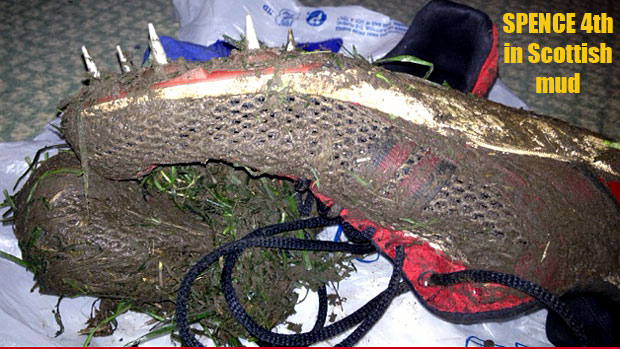 Some things cannot be controlled. For example, we had to be in our spikes and race ready 20 minutes before the start. So the best thing to do is try to not let it affect the mind, because the body will perform just fine.

And after the longest (and seemingly coldest) 20 minutes of my life, the gun was fired and the race was off! My ultimate goal was top ten. I settled In behind the leaders and wallowed in the muddy first half mile. I made it over the first log without a hitch, and felt great on the hilly back loop because I could actually get some grip! My first 2k was about 720 (super slow; I do tempo 2k repeats faster). The leaders took off and I settled back into seventh or so. Again, we battled through the mud, cleared the log, and on the hills I gained some ground. The 4k split was nearly 1450, and I was on the shoulder of third. I followed her throughout the entire last loop, and was disliking the mud more and more with each step. I was gapped a few strides at 5k, but caught back up with 400 togo. It was tight until we made the final turn and as I jumped over the creek with 175m to go, I felt something in my foot twinge. It prohibited my final kick a bit, but I am very pleased with my fourth place finish. It was a tough race, and one that goes down in the memory books. I'm pretty sure I can handle most any course after this.

The senior USA women all cooled down together, and then we had a team luncheon. My grandmother and I sat together and then spent the afternoon shopping on the Royal Mile. It was a wonderful way to spend my last day in Scotland. After a few hours, she dropped me at my hotel for the team meeting. After dinner, we had a special activity: a trivia game created by Garth, ozone of the coordinators.  There were seven teams of six random athletes from all the competitors in the event. There were six sets of ten questions, all centered around the various countries involved in Bupa. And we all know it isn't about how you place in the race, it's about winning the post-event activities ;-p just kidding, but we got competitive and guess who won?!?! The Spicy Six, which was my team! It was a one point victory, but we all won Scottish mugs as souvenirs. It was just a really fun time, and a great idea for a memorable way to cap off the event.

I'm finally all packed, and can't wait to go home. In fact, I'm so excited to get on the plane (crazy that I'm anticipating another 7 plus hour flight) but not too many hours before i can finally use my phone again! Well, and see my dad, family, and fiancé.

I plan on sleeping well on the flight, and then I have a few days off from running before I head to Houston to watch the trials and be a fan! The last marathon trials I attended was in 1996 (I was only 5) where i watched my dad go for his last shot at the marathon and unfortunately he had to drop out. But I'm thrilled to be going, and can't wait to be part of the road racing atmosphere and Olympic excitement.

As this is the beginning of my professional running, I will also be meeting my agent (Ray Flynn) for the first time, and coordinating meetings with some potential sponsors. Much to look forward to, and much to be grateful for. As I reflect on my time here in Edinburgh, I believe I am starting to figure out the international travel and racing protocols that allow me to perform to my ability. It can be an overwhelming endeavor, but each experience has taught me so much, and as I learn, the thing I realize that is the main key to success is keeping within yourself and striving to maintain as much of the usual routine as possible, while not letting the uncontrollables penetrate the comfort zone that you personally create.

A few thoughts before the race

I am excited and feeling ready to race and then go home. The trip has been great; experiencing a new country and culture is adventurous but exhausting. I am picking up a bit of a Scottish dialect, for, today on my premeet I said "pardon me" as I passed a few walkers. I laughed at myself.

I am going with 5/8th inch spikes! It is going to be a complete mud pit, but I am going to use the strategy the race directors gave at our technical meeting this evening: get muddy and enjoy. I think the most memorable races are those with the least favorable conditions because you hold on to them as good stories.

According to the event planners, the race will be broadcast at www.bbc.co.uk/iplayer at 842am eastern time.

If this does not work, or anyone just can't get enough of the running gossip, then you can tune into www.marathonradioproduction.com at 9am or later for a podcast on my running career thus far.

Might as well take advantage of my last good night of sleep for two days, more after the race, and thanks to everyone for all the support. 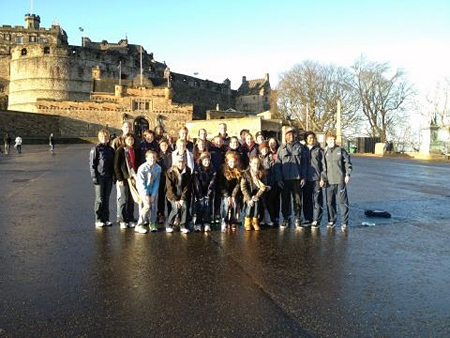 Sitting in the hotel lobby waiting for the Internet to work. This seems to be the story of my life because every time I connect the Internet fails. Though it is only 3 pm eastern time, I just finished dinner and will be heading to bed shortly. I am doing fairly well with the time changes (Scotland is 5 hours ahead of PA). To prepare, I started going to bed 15-30min earlier every few days as soon as winter break began. By New Years, I was in bed at 8 with lights out at 830. (a very exciting way to bring in 2012) But I must say, it certainly helped. I slept for only 4 hours on the flight here, and rested another 2. We arrived to the hotel yesterday at 11am and I went for a shakeout run with a few of the girls and Ed Eyestone. He told me stories about how he and my dad were roommates at the Barcelona Olympics in 1992, and other races they attended together back in the day. It was really neat to hear about all the places his running took him, and got me very excited about where running will take me! 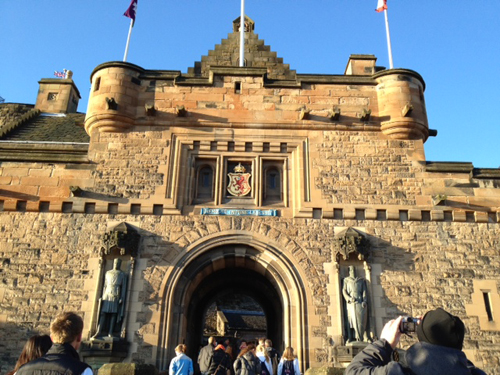 I wandered the streets with Erin Finn and Jessica, two of the junior athletes. Getting lost in the cold rain turned out to be a sure way to keep me awake. But it was quite an adventure. I started getting really sleepy about 6pm, but managed to hold off until 9pm and crashed for nearly 12 straight hours. I awoke this morning at 840am feeling refreshed and ready for the day to begin. No rain, and though it was cold and windy, our trip to the Edinburgh Castle was a success. Getting to see so much history was incredible, and the national pride of the country shown vividly in the crown jewels display. 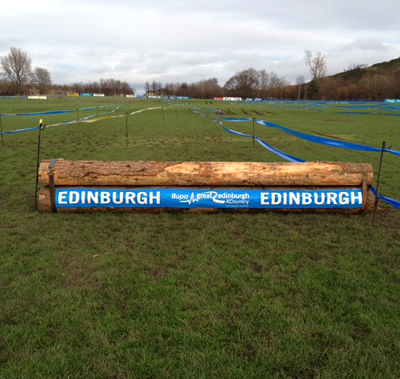 Went for a 50 minute run, and started out with Bobby Mack and Justin. We ran part of the course, and I am certainly glad I have a few days to mentally prepare for the race. The course was sloshy, and it was slick with mud. They are adding a tiered, 3 log structure to the course, so I plan on practicing that tomorrow. Who knew I would be attempting a steeple?  There are two little steep Kutztown-like hills in the beginning, and then another one toward the end of the loop, followed by an immediate right at the top and with a gradual hill leading into it, without a doubt it will be brutal (especially the third time!) There are also two creeks which the ship course has prepared me for I suppose :). XC is crazy here.

Off to bed, I have a press conference in the morning, and my massage tonight has me relaxed and ready for some zzzzzzz's.

Arguably the greatest distance runner of all time, Ethiopia’s Kenenisa Bekele.
"Pretty sweet," Spence said, of the chance to meet him.

Teams from the United States, Great Britain and Northern Ireland and a select European team  competed in men’s and women’s junior and senior races. Each team in the International Team Challenge consisted of nine athletes per team (six on the junior teams) with the first six athletes per team scoring. Great Britain and Northern Ireland took the overall team title, scoring a total 144 points over Team USA’s 196. In cross country, the team with the lowest overall score wins.

In the first race of the day, the junior men’s 6 km, Kirubel Erassa (Grayson, Ga.) battled with Mark Shaw and Kieron Clements of Great Britain over the first 2 km lap. During the second lap, Shaw and Clements gapped Erassa. Over the final lap, Erassa, a freshman at Oklahoma State University, steadily closed the gap, catching Clements then Shaw.  As Erassa sprinted to the line for the win in 1956, Clements overtook his teammate to take the runner-up spot one second later. Shaw ran 19:59.

In the junior women’s 4 km, Erin Finn (West Bloomfield, Mich.), led the field for the first one kilometer before European Junior champion Emelia Gorecka of Great Britain took charge and steadily pulled away to win in 14:48.  Aisling Cuffe (Cornwall on Hudson, N.Y.) ran 15:09 for the runner-up finish, while Molly Siedel (Hartland, Wisc.) took third in 15:16.

The senior men’s 8 km saw the European team’s Ayad Lamdassem and Atelaw Bekele lead the field for the first two laps but going into the third lap, Team USA’s Jon Grey (Minneapolis, Minn.) took command of the race.  Going into the final lap, Lamdassem and Bekele began to pull away from Grey while Bobby Mack (Raleigh, N.C.) emerged from the chase pack.  Over the final 400 meters, it looked as though the European team would take the top-two spots Lamdassem pulled clear of Bekele but Mack charged down the finishing straight to edge Bekele for the runner-up position.  Lamdassem was timed in 25:44 while Mack and Bekele were given the same time of 25:47.  Grey held on for fourth in 25:52.

In the final race of the day, Fionnuala Britton scored another individual win for Europe, dominating the field with a 20 second win as she ran 21:32 in the senior women’s 6 km.  Neely Spence (Shippensburg, Pa.) led Team USA with a fourth-place finish, running 22:11.

A video replay of the race will be available at www.bbc.co.uk/sport  until January 14.  For more information and complete results, visit www.greatrun.org.