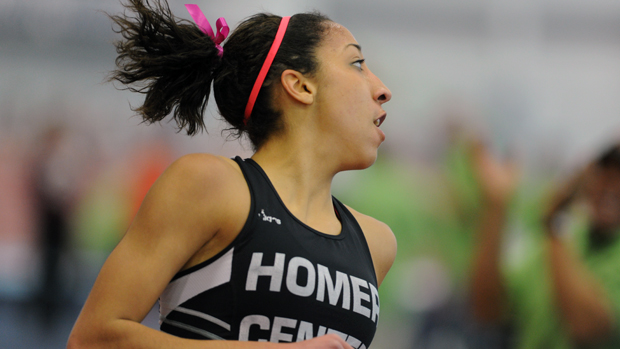 Splits: Coming... if you'd like to add your's for any event, email Don

Angel Piccirillo of Homer Center came out flying early in the mile, running a 68 first quarter. Hannah Grossman of Strath Haven hung tough to a half mile split of 2:23 for Piccirillo. The 2nd half of the race was all Angel, going through three-quarters in 3:34 on her way to shattering the meet record with a new NATIONAL LEADING AND ALL TIME STATE RECORD TIME OF 4:44.20! The time is also tied for US#9 All-Time.  The previous record 4:47.77 by Kim Gallagher in 1980! Ned Willig of Great Valley took advantage of an even paced first half mile and made his move with three laps to go to win the mile championship in 4:15.66!

The girls 400 meter champion came out of the non seeded section, as Kenya Woodall of Coatesville ran a state leading and US#6 time of 55.88! Her win was more than 7 tenths of a second better than the field. The boys 400 meter champion was recent PA resident and Greater Latrobe senior Tyler Ross, who ran a PA#1 time of 49.01 to win the gold medal.

In the infield of the track, Eliana Yankelev of Lower Merion ran a PA#2 time of 8.89 twice, including the final round to become the state champion. In the anticipated boys 60 meter hurdles, Aaron Willett ran three lifetime best performances to win the gold medal in a PA#2 and US#5 time of 7.89! In the girls 60 meter dash, Jody Evans of Quakertown capped off a full season of being PA#1 with a US#5 time of 7.47. For the boys, TJ Elliott of Central Dauphin East repeated as champion with a US#9 time of 6.87.

Emma Keenan went wire to wire in the 800 meter run to win her first indoor state championship with a US#2 time of 2:10.84. Today was the 3rd time this season she has recorded a US#2 performance. For the boys, Haneef Hardy of Swenson capped off a phenomenal 9 month stretch with his first state title, running a lifetime best and US#5 time of 1:53.30.

John Mudrey of Hickory won the boys high jump with a personal best clearance of 6-8! Megan McCloskey of Germantown Academy and Taylor Morgan of Upper Dublin both cleared 5-8 in the high jump, with McClockey winning the gold medal on the 4th jump off attempt!

Jared Allison of Dallastown won the boys pole vault with a clearance of 15-6! The girls gold medal went to Larisa Debich of Hempfield (7) who tied her seasonal best mark of 12-6 to win the title.

Stay tuned to this page starting Saturday morning for live updates, a live podcast,
a winners table of the champions, interviews, race video, photo galleries, and feature stories from the meet!