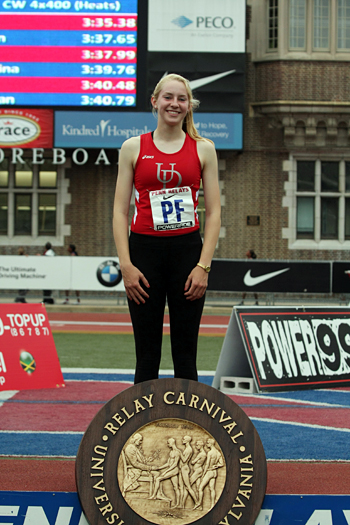 What was your most memorable race or competition?
My most memorable competition was Penn Relays 2012. Since freshman year when I first competed in the open high jump at Penn, it was my goal to be the top American finisher, to earn the gold watch. To accomplish my goal during my senior at my last high school Penn Relays was exhilarating.

Out of all your high school accomplishments, which one stands out the most?
My high school accomplishment that stands out the most was when I was the top American finisher at Penn Relays this year. It had been my goal since freshman year when I fouled all three of my jumps at Penn, and to come back without odds in my favor to take the watch was an incredible feeling.

If you could do it all over again, what would you change about your athletic career?
I would like to say I would change the fact that I had gotten hurt during freshman year or when I slipped and fell multiple times sophomore year because they were both setbacks in the progression I had hoped to have during my high school career, but I would leave them just they way they were. Learning to deal with unfortunate circumstances made me a stronger athlete and person and without those experiences I would not be where I am today.

What were the most difficult obstacles to overcome?
The most difficult setback I had (and still have to) to overcome was when I could not handle the mental aspect of the sport. I had to learn to get out of my own head and trust that I could endure the workouts and the competition.

What will you miss the most?
I am going to miss all of my friends I have made over these four years of competing. All of my fellow teammates, even my competitors, I have met so many interesting and genuine people, and I really hope we can stay in touch in the future, maybe even compete together again! 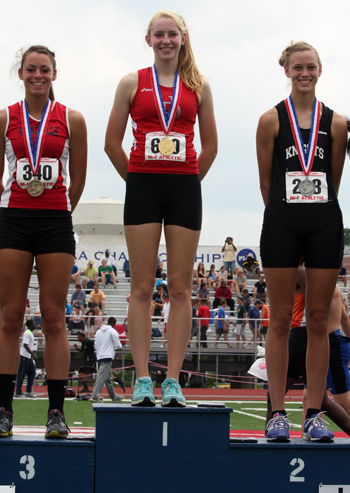 Do you have any advice for younger athletes?
You put in the work, but we all do. It’s the one that believes in him or herself, the one that accepts the challenge and believes he or she will come out on top that does.

How have your coaches influenced you performance and your life goals overall?
My coaches have taught me to trust myself. They taught me to accept challenges and to push myself to limits further than I ever imagined I could handle. They opened up my eyes to show me that although not everything will go my way every time, in the end if I stick to what I am supposed to do that I will prosper.

What are your college plans?
I will be attending Princeton University this fall where I plan to study engineering and German and will continue my track and field career!

Shoutouts?
Mike and Mimi McCloskey for coaching me way back when in CYO, teaching me how to high jump and continuing to support me today.
Coach Larry Wilson and the coaches at Ambler Olympic Club for coaching me during the summer since I was in eighth grade.
My high school coaches, especially Matt Dwyer, Tim MacBain and Paul Vandegrift for putting me through rigorous workouts, teaching me all they could about running and track and field, and supporting me even when they didn’t exactly know what to do with my jumping.
All of the Sports Extra coaches for coaching me on specific events, mainly Cardwell Wootten for all of the time and patience he has spent on me, all of the practices, the advice, the rub downs and everything in between.
Anyone else, all of my family and friends that I have met along the way because they all played a part in who I am and my success.
Finally, of course I want to thank my parents Roger and Patty for driving my butt to practice, coming to even my dual meets, driving hours to watch me compete, supporting me through ups and downs and just being there for me whenever I needed them.