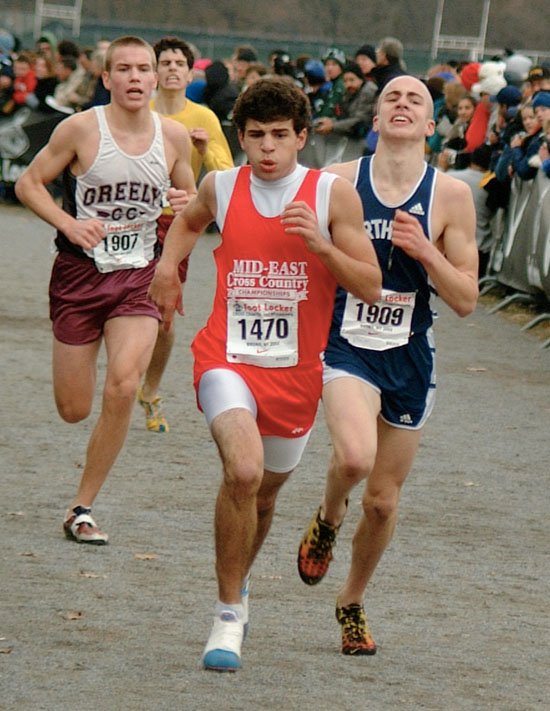 Jon Pastore overcame a disappointing state meet, picked up a little confidence at the Mid East Regional in Ohio as the first PA runner, and used his teammates starting line reservation to book his trip to San Diego. His 3rd place finish in 15:36 equals Andy Weilacher's effort of a year ago. Joining him in California will be Henderson junior Ian Gottesfeld, who fought off a brief loss of concentration over the final stretch to get 6th in 15:38. In the girls' race, Angie Saterstad, who attends Hershey high school but was kept off the XC team this year because she missed the first day of practice, came ever so close to qualifying. She finished 9th, going 18:37, after getting 10th as a sophomore. She'll be the first alternate. Also getting top 21 for the boys was Eric Flemingof Bishop Shanahan, who went 15:54 for 11th. The PA Boys team was 2nd overall, with Pastore,Gottesfeld, and Fleming backed up by Grant Allen, Eisenhower, 25th in 16:14; and Eric Soder, Harbor Creek, 34th in 16:21. Mike Kenny, Hatboro-Horsham, was just a second behind Soder. Joining Saterstad in the top 21 were Kate Papenberg, a Red Lion junior, who was 14th in 18:53; Emily Kruger, senior, Lampeter-Strasburg, 16th in 18:54; and Christine Taranto, senior, West Allegheny, 18th in 18:58. Those four teamed with Allentown Central Catholic junior Frances Koons, who was 26th in 19:11, to get 4th as a team. Just behind Koons were Forest Hills senior LeannaNastase, 27th in 19:12; Chambersburg junior Kylee Schuler, 28th in 19:13; and Lewisburg senior Ashleigh Wetzel, 10th in 19:19. Those tracking the season know that Kate Papenberg was closely followed all fall by teammate Erin Zellers, who won the sophomore race in 19:29. Aly Brown of Fort Cherry HS, was 8th in the race at 20:31. Henderson senior Mike Merrick was 2nd in the senior race, going 16:51. Also getting top ten in the boys' senor race were Wyomissing's Paul Stoltzfus, 6th in 17:03, Ephrata's Jason White, 8th in 17:07, and Council Rock-North's Alex Heitman, 9th in 17:14. East Stroudsburg 9th grader Brian Cullin was 3rd in the freshman race in 17:22. John Mahoney, Council Rock-North, was 4th in the boys' sophomore race, going 17:09. Also getting top ten in the boys' soph race were Germantown Academy's Sean Morgan in 17:15 (8th), and Downingtown's Sean McKinney, three seconds back (10th). Wyomissing junior Ashley Iwanowski was 12th in her class race, going 20:35. Chris Moreau, Lewisburg, was 13th in the junior race. Kari Blood, East Pennsboro, was the top PA finisher in the girls frosh race, getting 17th in 20:49. Central Dauphin's Terry Sutherland was 22nd in the girls' senior race in 21:02.

What a day for the PA boys! On the fringes of elite for his high school career, Jon Pastore, the #1 guy on three-time state AA champions Scranton Prep, extended his senior season with a gutsy, error-free run against the best the Northeast could throw at him. Joining him in San Diego will be star junior Ian Gottesfeld of the State AAA Champions West Chester Henderson. Both are great runners who were able to find that something extra needed to fight the worst element of racing, self-doubt. And running without benefit of a high school team, Angie Saterstad nearly made her Foot Locker dream come true.

Pastore was disappointed with his 7th place finish at States, but received, and accepted an invitation to race at the Mid East Regional two weeks later in Ohio against some of the best from the midwest, where he finished first for PA in 11th. "I got mentally confident with the race out in Ohio, and that boosted my spirits, and I came out here trying to get top eight. I didn't know if I could really do it."

Pastore's race had a lot to do with successful planning. He knew he didn't want to get caught around the first sharp turn at the Foot Locker balloon, so his teammates got him his spot on the starting line on the outside. "The whole pack slowed down to the left, and I was on the right, so I picked people off." He pulled up to about 25th entering the woods. Sensing that the start had been extraordinarily fast (word was the half was 2:08), Pastore ignored the mile split. "I didn't want it to break my confidence." Pastore continued to roll and even took the lead briefly just after the two mile mark. "It's definitely my best high school race, and hopefully I'll have another one two weeks from now."

Gottesfeld came in with the weight of expectations. He was a state champ. He hadn't lost a race in PA all season. And he had been among the elite at the Great American Festival in September, finishing 5th in the Race of Champions. Yet he was still unsure, despite finishing 35th in 2001, about what would unfold. But he shook it all off, along with a clump of mud on his shoe in the first half of the race, and a momentary lack of concentration over the final 100 meters, to finish 6th and punch his ticket to San Diego.

"I had this really big wedge of dirt in my cleats. I was like running on a bump. It felt like a rock. It covered my 3/8th spike and hurt my footing and made my spikes useless. Then halfway through the race it fell off and I decided I better take advantage of it." He did, pulling up to the leaders in the woods, and coming out for the final 800 in great shape. He even took the lead briefly in the final stretch before he "shut down mentally." That momentary lapse allowed five guys to shoot past before he got back to the job at hand and finished strong. " I went too early I think, because then they flew by me."

Gottesfeld's goal for San Diego is to finish top among the Northeast contingent. In fact, he thought he could have won the Regional. "Anybody's got a shot if you're in the lead at that point, so obviously I could have won this. It's not that I'm trying to be brash, I'm just saying it's only logical."

Angie Saterstad has travelled the longest road to near stardom. Locked out of her high school senior cross country season because she missed the first day of summer practice, Saterstad spent the season training with the United Stars, a Philadelphia area track club, training on her own, and racing New York Road Runners' Club races at Van Cortlandt Park to get into race shape. The comeback was tough because she was coming off a disappointing Foot Locker regional in 2001 after finishing 10th as a sophomore in 2000. Her 9th place finish makes her the first alternate should any member of the team not be able to make the race. Saterstad's plan was to be in the top 30 near the mile and work her way to the top eight from there. She was actually in 12th at 1.25 miles. She came out of the woods in 11th and passed a couple of runners to eventually get 9th. She's not disappointed with her effort. "I went for it , and I'm proud of what I did." But she did miss her teammates, the chance at a 4th District 3 title, a shot at a state championship, and a potential berth on the Mid East squad. "But I proved to myself what I could do."

Saterstad is hoping to join her high school team for her final outdoor track and field season. "If it means I have to miss the national indoor meet to be on the team, that's what I'll do."