Changing his race tactics for one day, Andy Weilacher lays back early and surprises a lot of people late. 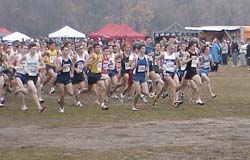 The start of the race, and Mazzocco is out early.

Just as Jessica Cickay took a page from Stephanie Madia's normal race plan, Andy Weilacher did, too. Going out at the back of the lead pack, and coming on after the mile. "I went out slower in the first mile than I have all year to hopefully have something left for the next two, and have a good finish."

He let others lead, but maintained contact with the group he knew would represent the Foot Locker finalists as the race evolved. "There were probably eight to 10 guys in a pack at the mile." And that's when the racing began as the pack started to string out. Then it wound up the small hill, over the bridge, up again, and then through a series of small downhills before the final, nasty climb to two miles. "There were five of us that pulled away at the two mile. Then it was me and Meindl (the eventual winner) through a lot of the way, before he pulled away just before three miles." 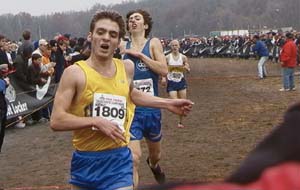 Weilacher's finishing kick was enough to get third in the Northeast, and a ticket to FL. (Photo by DyeStat)


Weilacher isn't entirely confident with his kick, so he was doing all he could to make sure he didn't have to use it to save 8th place. "I wasn't sure I was going to make it until the end, because everyone had a real strong kick. It was real tight the whole way through."


PA's other two favorites, Dan Mazzocco of Baldwin, and Rob Robertson of Coatesville, were just off the pace, finishing 14th and 20th respectively. "I just know I'm as fast as those guys, but I just lost ground on the hills for some reason", said Mazzocco. Robertson was equally perplexed, wondering aloud if they should have run last week's Mid-East Regional, a race that Weilacher skipped.Weilacher said he had never heard of the race until after the State meet. "And I had been planning to do only this (Foot Lockers), so I skipped it."


But Robertson and Mazzocco can feel good about their place on the national XC scene this season, especially in light of their performances at the Mid-East Regional. Robertson was 3rd, behind Tim Ross of Michigan, and Allen Bader of Ohio, both of whom qualified for the Foot Locker finals in the Midwest Regionals yesterday. And Robertson beat the three guys that went 9-10 and 18 in the Midwest, while Mazzocco was within four seconds of all three. 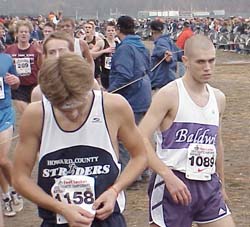 14th in the Northeast is great, but this wasn't the time to tell Mazzocco.


But a key to success has to be confidence. And Weilacher had plenty before, during and after the race, despite not racing even PA's best all season. "I was pretty sure that I would qualify, but I didn't know what I'd place. I was hoping for top three, and I did it."

He said going to the national meet means a lot. "I've been praying and working, hoping I could."

Congrats to all of PA's Foot Locker Finalists. You've earned it.