Jessica Cickay and Stephanie Madia borrow each other's race tactics for a day, and it works well for both – each can now be called a Foot Locker Finalist!


From season-long observation, Jessica Cickay is a front-runner. Go out hard and make everyone else try to catch you. And it worked to perfection through an undefeated season, until dehydration on a hot day caught up with her, along with Madia, as she was passed at the line in the AAA state championships.


And Madia is a confident, cunning runner who knows her strengths and uses her race experience to bide her time and run from behind. The tactic got her a state championship in the spring in the AAA 1600 against Cickay, and a state AAA XC championship this fall. 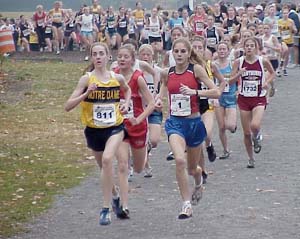 Madia is just behind the leaders approaching the mile. Erin Franklin is in the top ten at this point. Jessica Cickay is, as planned, hanging back.


But at Van Cortlandt Park in the Northeast Foot Locker Championships, the two elite runners reversed roles. Cickay stayed back. Madia pushed to the front. And what do you know? They're both going to nationals!

Cickay said the plan was to hang back. "No way to go out in the lead. No way to start too fast. I was just trying to feel relaxed, especially the first mile." The lead pack blistered that first mile in 5:25, which according to Cickay, was her normal mile time. "But I felt comfortable. I felt good. The whole race I felt good."


And for an eastern PA athlete, she even enjoyed the hills, which shouldn't be surprising coming from the course record holder at Philly's Belmont Plateau. "I was tired at the end – struggling, of course. Someone passed me in the end. I wouldn't have let them pass me if the place was on the line."
Madia, on the other hand, had a new idea for this race, which sounded a lot like a Cickay plan. "My goal was to be 4th at the mile, and that's where I was." 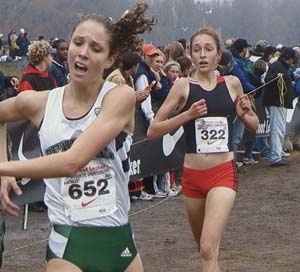 Cickay finishes just behind Liz Gesel of New Hampshire as the top sophomore (and only Finalist) on the day. (Photo by DyeStat)


Last week at the Mid-East Regional Championships was Madia's first experience running in a race loaded with Foot Locker-caliber athletes. (Indeed, two girls who beat her in Ohio, Jessica Gall of Ohio and Kristina Roth of Indiana, finished 5th and 4th respectively in the Midwest Regional 11/24,and the other Michelle Rafferty of Indiania, was 11th.) "I was a little nervous because I hadn't been here before. I knew that a lot of girls were really experienced at this kind of race. But I was really confident after Mid-East because I went out fast the first mile and started getting accustomed to that, and being able to hang on. So I used the same strategy. I think I went out a little fast today, but my goal was to qualify and that's what happened."


This was Cickay's first experience against so many elite athletes, and following the unexpected finish at States, her confidence was bruised a bit. "States was definitely dehydration. I don't do well in hot weather. It affects me. But a lot of hard workouts helped in the last few weeks to give me confidence." 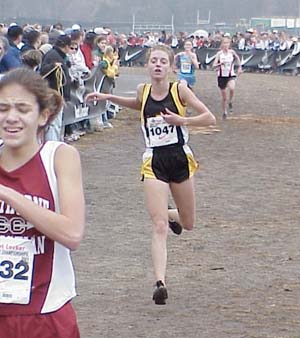 Madia crosses the line in the 8th and final spot for the Foot Locker finals.


Cickay admits to working herself up about big meets, so she dealt with the Foot Locker pressure by having a good talk with herself. "I told myself to calm down. I tried to say there's no pressure. No one really knows about this. At least from my school. People weren't bugging me all week. If I didn't do well, no one would have to know. I just told myself, calm down, and run your own race."


And the racing from behind tactic worked, as she passed people on the hilly second mile until she found herself in 5th as they crossed the bridge coming out of the woods. "I felt good. I think I was in fifth, and I said I can let one person pass me and I'll still be OK. Knowing that I had a little bit of leeway felt good."


Madia's experience running from the front was entirely different. Having achieved her goal of being in 4th at the mile, she settled in to try to maintain the pace. She was confident, as is any top runner from western PA who sees hills in virtually every race. But this time she ran into a little trouble as she raced up the switchback hills approaching two miles. "Going up some of those hills, my legs started to tighten up a little bit. And my second mile didn't go as well as I wanted. But it's just dealing with adversity." 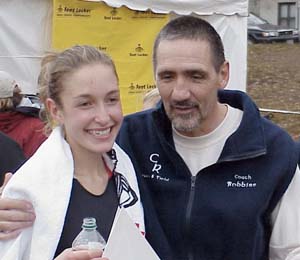 Cickay and coach Cliff Robbins, who noted after the race that "some athletes get near the top and look over the edge and like what they see. Jessica is one of of those."


But she re-focused and used "adrenaline and the gifts I've been given" to maintain contact. "I was in 10th for a while. People were yelling, 'you're ten-you're ten'. The girls were always within reach. That was my goal, to just never give up, so I could try to out kick them at the end."
Coming out of the woods she got a boost from her coach, Liz Bollens, and Baldwin coach Rich Wright. "They were yelling my place to me with about 800 to go. I moved into 8th with about 400 to go, and just kept on going and didn't look back."


Both are pleased with their seasons. But Cickay says that getting to be a Foot Locker Finalist was a direct result of "a lot of hard work, hard workouts, especially the last couple of weeks. But it's just been a great year. We've had a lot of fun together!"


Madia is thrilled to be running in two weeks with "a group of girls that are so talented. My senior season has been really, really special, and God has blessed me a lot. It's still all sinking in. I feel like I've reached the first hurdle, and I'm really looking forward to Nationals." 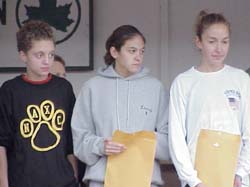 Madia and Cickay haven't had much time to get to know each other. After passing Cickay at States, Madia turned around to congratulate her, only to find she was being taken care of after going down. And Cickay wanted to congratulate Madia, but was so dehydrated, she was taken to the hospital.
They'll have plenty time in Orlando. 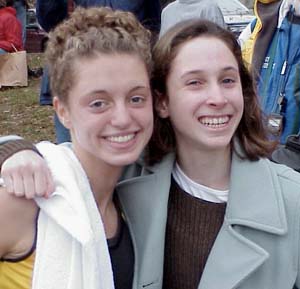 Madia is congratulated by 2000 Foot Locker Finalist Julia Pudlin, who was at the meet to "support Baldwin School teammates and PA."

"I'm really excited to have another PA girls going," says Madia. "It shows that PA is deep, and that we're very good competitively with other states. But it's a shame that Julia (Pudlin, 3rd NE, 8th Nationals in 2000) couldn't be with us. It's just awesome that we can have two Pennsylvania girls."