Lower Dauphin junior Cole Nissley is the rare type of runner who not only aims for the best and competes among the best, but when statistics are broken down and evaluations are made, he should also be considered among the best in his class, in his league and in his district.

But there is a clear distinction.

Nissley is not the best. 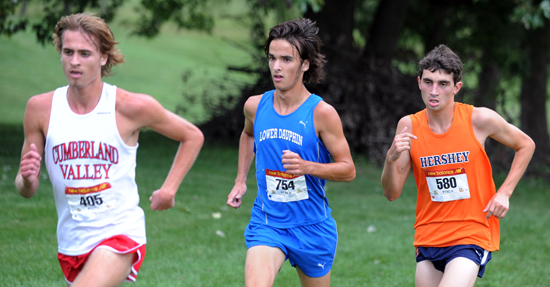 Conversely, on many evenings he is just second best, just a few seconds away from that winning time and that first place cache.

Even further, he’s second best on his team.

To many young athletes, especially competitive runners with egos built somewhat on their running success, that could be enough to tailspin a season, maybe even a career. But it hasn’t for Nissley.

There are a number of factors that have kept him positive. His love for the sport. His natural ability. His fun-loving nature. His competitiveness. His potential.

There’s a reason he’s one of the best No. 2’s in his league and district. Like many No. 2’s across the state, his strength centers not so much around his ability to run fast, but his ability to think positively.

“I know everyone looks at 1-2,” says Nissley, who pairs with teammate Jeff Groh to feature arguably the best tandem in District 3. “In my mind, though, I wouldn’t have it any other way and I wouldn’t want to get beat by any other person. The way we look at it is we want to be the first two in and we want to have 12 people knocking the wind behind us.”

The Lower Dauphin runner certainly has to make ground up if he wants to qualify for states. He was 30th at Districts a year ago -- only 25 qualify in AAA for the final meet of the season.

But his goal is definitive: Finish either in first or second, along with Groh.

Nissley fell in love with the sport when he was in the fifth grade. He remembers one story closely. It was the first moment when he realized running meant more to him.

“In the 5th grade other kids would go out and play,” he says. “I would go outside and ask for someone with a stopwatch. I would say, ‘Hey, can you time me running three times around this field?’ I wanted to be faster than everyone.”

And for the most part he was, but as a freshman he had his moments. When Lower Dauphin coach John Butler was just starting out as a varsity head coach, Nissley was a freshman learning the ropes.

“It was a learning curve,” Butler said. “I experienced this in college, so I knew what was going on. But he came in from the eighth grade, where he was the stud, to competing against kids that were three years older than him. He would get beat and you could see it. He would get over hyped and he would almost get in panic-attack.

“In his first race he almost had a panic-attack. After 800 meters he’s gasping for air and saying ‘I can’t breath, I can’t breath.’ We joke that he finished that race in 26 minutes, but it was a learning point. By the middle of his outdoor track year, he had it figured out.”

Butler and Nissley have formed a strong athlete-coach bond for many reasons. But the biggest, Butler says, is that he sees a little bit of Nissley in himself. As a varsity runner for Cedar Cliff in the early 2000s, Butler was an eager to learn, eager to please front-runner who had to learn to be patient.

“Cole is the closest person to being me at that age,” Butler says. “It’s easy for me to relate to Cole, because I was just like that. He wears his heart on his sleeve. If Cole is happy, you’ll know it. If Cole is disappointed, you’ll see that too. 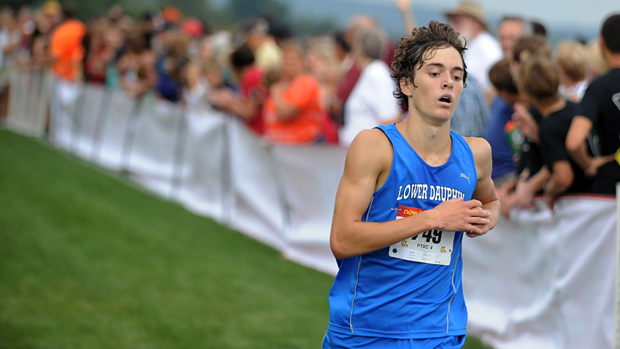 “It can be frustrating at times, because you see yourself in situations that you went through in high school and you want to tell him to do this or that a certain way. But you have to let him make those same mistakes. Because I see so much of him in me, I want to change some of the things before they happen. But he’s a lot of fun. He’s excited about everything.”

Nissley is also an idealist. Setting high standards lets the junior shoot for the moon. Once one accomplishment is achieved, one more is created. He believes in his ability to out-work, out-think and out-run his competition.

It’s important to note, too, that races are fleeting, and second best only lasts for so long.

The times certainly put him in the hunt to contend in the district race, along with Groh, Cumberland Valley’s Alec Kunzweiler and Hershey’s Nate Hamilton.

Groh, who did not finish at the Foundation PIAA Invitational due to heat concerns, was fifth at PTXC with a  time of 16:09, which was his personal record. He ran 16:30 at Parkview in 2011 to win the District 3 meet.

The pair, who became friends in the seventh grade, are close-knit and work well together, Lower Dauphin head coach John Butler says.

“The good news is that they’re friends,” he said. “They are both front-runners, but they are different. Jeff is the kind of runner who will let you with him for the first half the race and then turn it on. Cole is the type that, if there’s a shot in those last 800 meters, he’s going to give you a run for your money.

“It’s awesome to have those two guys. It gives you two guys to look at. Jeff is quiet but he leads by example. Cole is outgoing and, the both of them give us a strong platform to succeed.”

Come to think of it, second best isn’t all that bad. Successful cross country teams are built on foundations, not just the singular stars. And winning formulas are typically drawn from tight packs and lead groups.

“It’s helpful,” Butler says. “When I was at Cedar Cliff when we won states in 2001, we had three guys who were front-runners, and I was the third looking in on the pack. But we always said, if we were going to get beat, at least it’s your teammate.

“And for Jeff and Cole, where it works wonders is in training. They are really able to push themselves.”

To be the best, you have to train with the best. Nissley is well on his way.