It isn’t the bright orange Corry Area uniform or matching spikes that set Austin Pondel apart from the crowd.

It’s what he does in his competitive apparel that has put the 5-foot, 6-inch senior head and shoulders above everyone else he has lined up against this year. Undefeated and rarely challenged heading into the most important meets of the 2012 season, Pondel has his sights set squarely on big, but not easily hit targets. 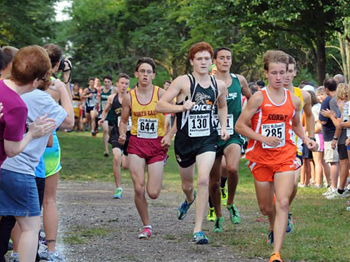 “Being a stronger runner, I believe that it just opens the door for using more strategies,” Pondel said of the main reasons behind his success in 2012. “All through my high school cross country career, I would go out easy the first mile and make my way up through the pack, but now with a great threshold of strength, I feel like I can employ different tactics so that my competitors can't predict me.

One thing that has been extremely easy to figure out in 2012 has been Pondel’s finish position – first. And not just breaking the tape first, but top finishes with nary a competitor in shouting distance with an average margin of victory of 34 seconds in five invitationals.

“To be honest, when Austin first came to me three years ago expressing an interest in what he could do to ‘get better,’ I never imagined he would excel to this level,” Corry Area coach Katie Kuttenkuler said. “Not far out of college myself, I decided to give Austin the training methods I used when I started my collegiate running career. I remember telling Austin, you are going to have to run twice a day sometimes, up your overall mileage, do more speed workouts and train all year. 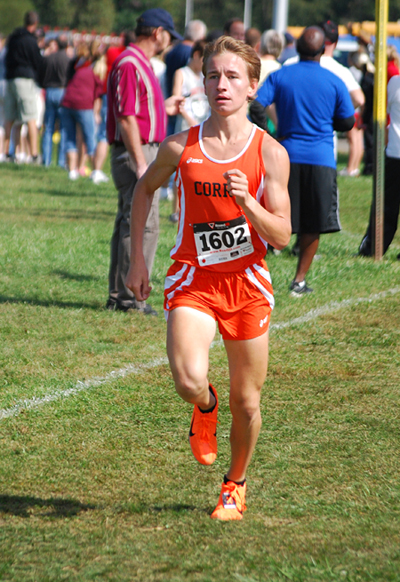 “I figured he would do some of those things but as a high school teen he would not commit 100 percent. I sure was surprised.”

The first indication that this season was going to be special came in the McDowell Invitational, where Pondel would face a familiar foe from 2011, Taylor Allderdice’s Ean DiSilvio. A year ago, Pondel’s season was marked by a series of close-but-no-cigar finishes with the Dragon runner.

Those near-misses in the final sprints to the tape served as both motivation and reminder for Pondel. On Sept. 1, he covered the 5,000-meter layout at Brown’s Farm in 15:36.3, a full 21 seconds ahead of DiSilvio and another 16 in front of North East standout Ryan Smathers.

“Finishing right behind Ean really just made me frustrated each time last year,” Pondel said. “You have to give it to Ean, though, simply he just had that extra speed at the end to get me. Last year at McDowell, Boardman (Ohio) and states, he finished between 0.8 and 1.2 seconds ahead of me each time.

“Even though he ruined my day a couple of times last year, my main motivation to become faster was the 22 guys that finished ahead of me at states. It was the overall picture to me, and now this year we have raced twice and I have beaten him so it’s just icing on the cake because he still definitely is a superb runner in the state.”

The victory at McDowell was followed two weeks later by a completely solo effort at the Spartan Invitational in Ohio as Pondel shifted into a gear that the rest of the field couldn't match, leading by 10 seconds after the mile en route to a 40-second victory over a field that included several of the top Division II teams in the Buckeye state.

Although he took countless opportunities to look back at the field as he exited turns, Pondel’s time ranks among the best ever at the invitational. His 15:44.71 was bettered only by three other runners who were battling for first place until the final meters of the other division races. 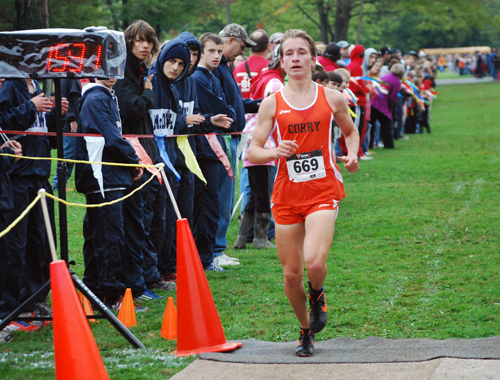 A week later in wet, muddy conditions at the Sharpsville Invitational at Buhl Park, the site of the District 10 meet, Pondel’s orange uniform couldn’t be seen as the main pack ascended Kite Hill for the first time. On the downhill side, he was pulling away from the field en route to a 54-second victory in a season-best time of 15:32.9.

In analyzing her standout’s season heading into Saturday’s District 10 region meet at Union City Country Club, Kuttenkuler isolated the McDowell and Sharpsville invitationals as performances that uncovered the new side of Pondel.
“At McDowell, he really showed his competition what he was made of,” she said. “Two athletes that certainly got the best of him last year, Ean DiSilvio and Ryan Smathers, were not near him. It was very clear to me that day his summer training was executed perfectly.
“He went out at Sharpsville with the intent to break a course record. Although he fell short of that goal, I was impressed with the speedy pace he kept throughout the race. It was the first time he ever gave an all-out attempt so early in the season. It was nice to see him overcome a fear of going out too hard.”

As with many future distance runners, Pondel took a liking to putting one foot in front of the other in a race against the clock while in elementary school. With an older sister, Kelsey, showing the way to cross country and track, the Corry Area standout said he fell in love with running as a result of a half-mile race in third-grade gym class.

As a seventh-grader, Pondel said he found out that success in the sport would not come without miles and miles in training.

“I always tell the middle school team now my story of finishing 147th out of 190 (as a seventh-grader) at the Rocky Grove Invitational, and the next year I got 15th,” Pondel said, noting that he started training prior to eighth grade. “I can guarantee you about two-thirds of District 10 runners say and know they beat me in middle school.”

An important part of Pondel’s transformation into one of the state’s best is his dedication to running and his high mileage training. With most of his summer runs coming on the dirt roads near his home, the Corry star topped 80 miles in a week and logged at least 59 miles each week during the summer and early season.

“Austin is 100 percent committed to running,” his coach said. “Any runner who truly wants to can maintain 75-80 mile weeks, but it takes sacrifice. On several days, Austin will run before school as well as after. Austin runs better when he is doing high mileage.”
Pondel’s coach acknowledged the recognition and attention that the senior has gotten as a result of his cannot-be-missed wide margins of victory in 2012. Despite the notoriety that has spread across state lines, the senior remains a quiet, but effective leader.
“The other kids always say, ‘I want to be just like Austin,’ Kuttenkuler said. “He has had the biggest impact on our No. 2 and 3 runners, Curtis (Royek) and Dennis (Whiteley). Both boys have specifically asked to do more miles and harder speed workouts ... just like Austin. Although Austin is a young man of few words, when he does speak, the other kids revere his words, particularly his encouragements and praises.
“Most importantly, Austin leads by example. It is challenging for teens his age to eat right, sleep right and train right. It takes discipline and determination. Occasionally you notice the other kids trying to model him. As a coach, that is something that is irreplaceable – someone who inspires others through actions. That is a better motivator than any speech I could ever give my athletes.”

Each victory this season has brought Pondel closer to two milestones that many of the state’s best are chasing – an individual title at Hershey and a ticket to the Foot Locker national championship at Balboa Park in San Diego. His first two trips to Hershey yielded far different results – a part of the pack in 2010 versus a state medalist in 2011.

“My trips to the state meet have been reality checks of what it takes to be the best statewide,” Pondel said. “My first time going it just got me used to being in a big race and crowded fields in AAA, and I finished 103rd. Last year, mentally I was 'all there' but my strength and racing strategy wasn't.

“I started out the first mile in 47th while making up ground and reached as high as 15-16, but by two miles I was red-lined and just didn't have the strength for the last mile, finishing 23rd. This year though I know is my breakout year, and I'll know that my goal is the AAA state title.”

On Oct. 27, Pondel will face his final major test before the Parkview Course when he and Grove City standout Daniel Jaskowak square off for the first and only time during the season as the Class AA and AAA fields will be combined at the District 10 meet in Sharon. Pondel had the faster time at Boardman as Grove City moved up to the Division I race, keeping two of western Pennsylvania’s best from meeting.

If Pondel earns a third ticket to Hershey, he will line up for the Class AAA race although Corry’s latest enrollment numbers place it squarely in the middle of Class AA. Noting her school’s placement historically in Class AAA, Kuttenkuler petitioned the PIAA and District 10 to move the Beavers back into Class AAA for the next two cross country seasons, believing that facing much larger schools and deeper fields will bring out the best in Pondel.

With official visits to La Salle and Lehigh scheduled for the week after Pennsylvania’s best distance runners meet, Pondel is hoping that a strong showing in Hershey will result in additional opportunities being available to him, with another race still as the ultimate goal.

“In the end, though, a trip to San Diego is in my mind for Foot Locker Nationals.”