The girls AA division has lost some teams to the new Class A addition but has also gained some new teams from AAA. The former AAA squads have made an impact on the division, but they will still face some stiff competition from the long standing AA teams. 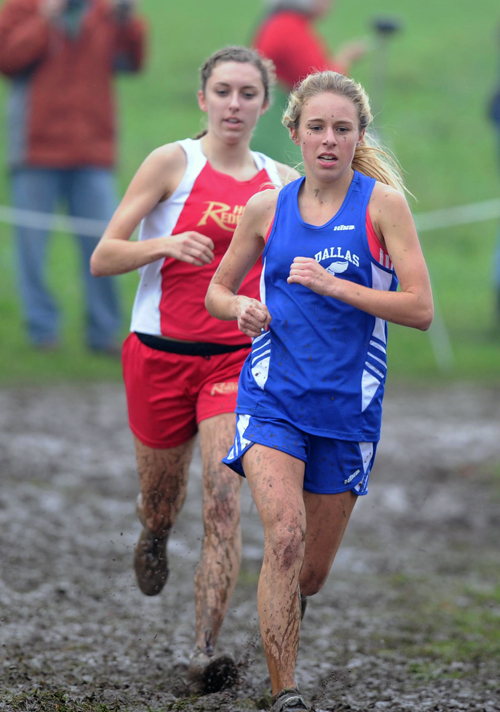 Dallas has spent most of the season marked as the best team in the division. They won two AA titles before shifting up to AAA several years ago, and are now where they belong. Dallas has earned some big victories this season, winning the Gold race at PTXC 4, the Blue race at Foundation, and the Ed Narkiewicz league championships. Regan Rome of Dallas has been one of the best runners in AA  (and PA) this season and will be a strong favorite to earn their team a valuable single point towards the team title race. She has only missed out on a gold medal once this season and has the best time in the division (17:42 on October 17). The rest of her squad has run well to support her front running efforts. The varsity squad had been unbeaten up until Wednesday's mud fest at the District 2 championships, where Holy Redeemer was able to get the best of them by a narrow 3 points after losing to Dallas by one point the week before.

Holy Redeemer brings a lot of experience to the meet, finishing 4th in the state meet last season led by two in the top ten. Rachel Sowinski (5th) and Marissa Durako (8th) came back in similar form as last season and will look to have more good performances. This season, they have led their teams to a 3rd place finish at PTXC 4, 2nd at Foundation, and 9th place at Paul Short. Like Dallas, Holy Redeemer gets consistent performances from their remaining scorers to support their front runner teammates. With the consistency of Rome, Sowinksi and Durako, the remainder of their squads will need to be at their best to complement those performances and lead them to the state title. 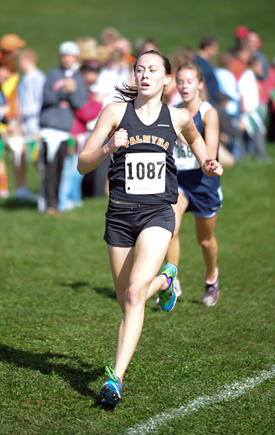 Outside of District 2 come two more AA newcomers that have also impressed against in all competitions. After finishing 10th in AAA last season with no seniors on the varsity squad, Palmyra girls started the season as having one of the best 1-5 compressions in the state. At their debut invitational in Lebanon Valley, they went 2-6 with a spread of 22 seconds and also carried a sub 60 second spread for their first 8 runners. They followed that up with a perfect score at their county championship and also won their league meet over former AAA district rival Cumberland Valley. Only AAA and PA#2 Pennsbury has been able to get the best of them this season. Maria Tukis leads five girls with season bests at 20 minutes or faster and enter the meet unbeaten against AA competition. The same can be said for 2010 AAA 7th place finisher Archbishop Wood from District 12. 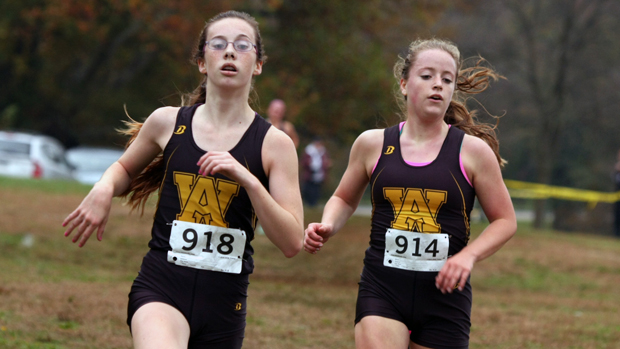 Archbishop Wood had cracked the dominance of Cardinal O'Hara in District 12 in AAA the past two seasons and entered their new division with a sense of optimism. They returned six of seven varsity runners from the 2011 state meet and have improved at each performance. Wood has earned invitational wins at DeSales, Briarwood, Rhode Island, the Catholic League and scored a perfect score at District 12. Wood also relies on pack running, as they have recorded sub 40 second compressions in three of their last four meets. Casey Ortiz and Meg Connell lead the way for a group that will have a tough pack to break.

Also in the race will be defending state champions Saint Basil Academy who can never be counted out with Megan McGarrity leading the way. Renewed district rivals Gwynedd Mercy Academy edged out Basil's at District 1 and are led by 800 meter specialist Emma Keenan, who will be completing her first season of cross country after forsaking field hockey. Villa Maria Academy from District 10 has been one of the surprise stories of the 2012 season, including a top five finish at the 60 plus team Tri-State Championships on October 18.

Other individuals who will be looking for AA state glory are Adair Gennocro of St Mary's. She is the top returner from last year's state championship (3rd) who hasn't finished worse than 3rd this season. Frosh star Bernadette Prichard of Villa Maria Academy has been one of the best newcomers of the 2012 season and will look to impress in her first state meet. She has four wins this season. Veronica Wheeler of Nazareth Academy won the white race at Paul Short to give her season some momentum. Lille Brown of Boiling Springs and Molly Davies of Lower Moreland are returning medalists.

Many of the top teams from the 2011 AA meet have moved on to the newly created Class A division, allowing for new teams to have an opportunity to earn their own glory. One team has started at the top and has spent the 2012 season as the number 1 team that the rest of the field will have one last chance to beat on Saturday. 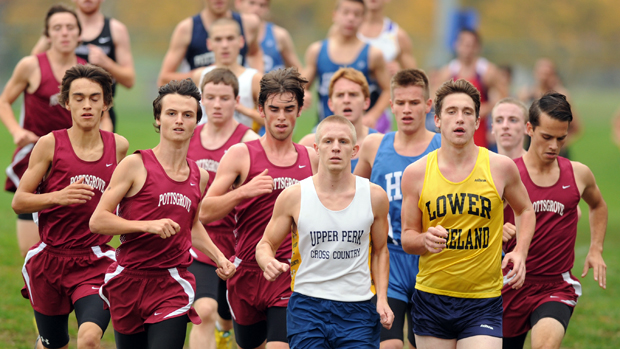 Pottsgrove started the season as a relative unknown but broke out onto the scene at the first even Class A race at the Foundation Invitational, where they earned victory over Grove City, Scranton Prep and Bonner Prendie. Since that performance, they earned a top ten finish at Paul Short and were the top AA team; they cruised to victory at the PAC 10 Championships, and this past Friday, they had their best race of the season, scoring 2-3-5-6-7-8 with a 20 second spread in their District 1 test. Ian Yanusko and Evan Cook lead the way for the District 1 squad who have the 2nd overall smallest spread in the state. Their top challenger has had success this season with a different style. 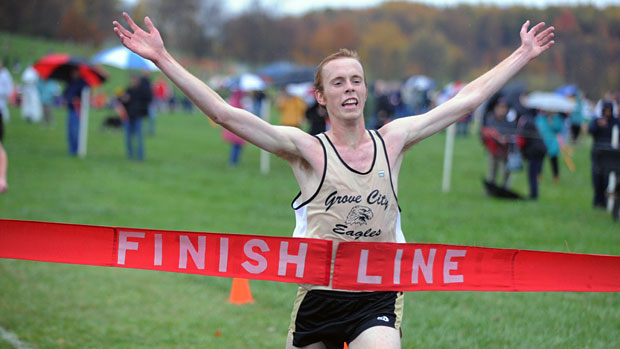 Grove City will be led by last season's AAA runner-up Dan Jaskowak. His state performance last season capped off a breakthrough season for the then junior star. Jaskowak has continued that success and this time around he will be bringing his teammates to the state meet. They have been able to earn victories with Jaskowak front running and the rest of the team finishing the job. They will look to matchup with the Pottsgrove pack to make the low score of Jaskowak count towards a team championship.

Other team contenders will be pack running District 2 champions Scranton Prep, who won the Cliff Robbins Invite, 12th at Paul Short and 2nd at Foundation. Defending AA state champions and District 7 champions Quaker Valley have been surging as of late and are coming off a big victory last Thursday after graduating a large chunk of their team last season. AA newcomers District 12 champions Bonner Prendie have had their best season since the mid 2000's and have spent most of the season racing against District 1 and District 12's big AAA squads. Bonner will be making their first-ever state appearance while Scranton Prep and Quaker Valley have a lot of experience and are former champions. 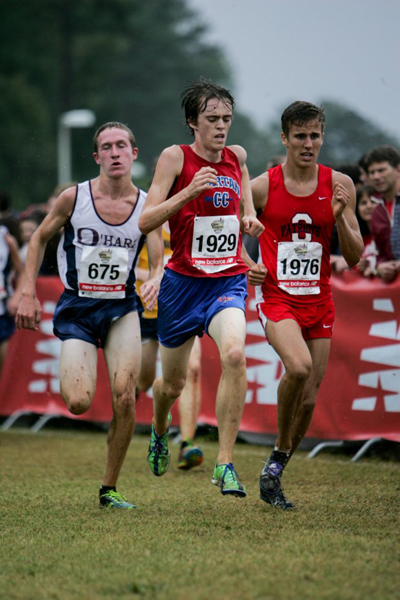 The individual race will see defending AA champion Brendan Shearn of North Schuylkill going up against Jaskowak, the AAA runner-up last year. Shearn has competed in a lot of big races this season, winning the Briarwood Invitational by a lean in the 4th fastest time ever on the course; finishing in the top 15 at Great American in North Carolina, and setting a meet record in his league championship. Jaskowak has won his district meet and won the Tri-States championship to enter the state final in good form. Vinny Todaro of Big Spring has had a breakout season and has gone undefeated this season and has a season best of 15:31 and a win at the Carlisle Invitational. Aaron Valoroso of Towanda is the District 4 champion and ran 15:38 this season at the NTL Championships. Dominic Deluca of Dallas has not finished worse than 3rd in any race this season and is the Ed Narkiewicz league champion. Two time District 1 champion Dan Alexanander of Lower Moreland, Mark Bachman and Shawn Wolfe of Annville-Cleona, Ryan McGuire of Trinity Christian and Tyler Stelmack of Northwestern Lehigh are returning medalists.