WHO HOLDS THE 1600 RECORD FOR A HIGH SCHOOL FRESHMAN?
Nope, it's Craig Miller of Manheim Township.

With 100 meters left, Miller is taking it to the seniors. Breisch and Shaver would pass him just before the finish. But Miller says that after this year's success, he's "a runner now." 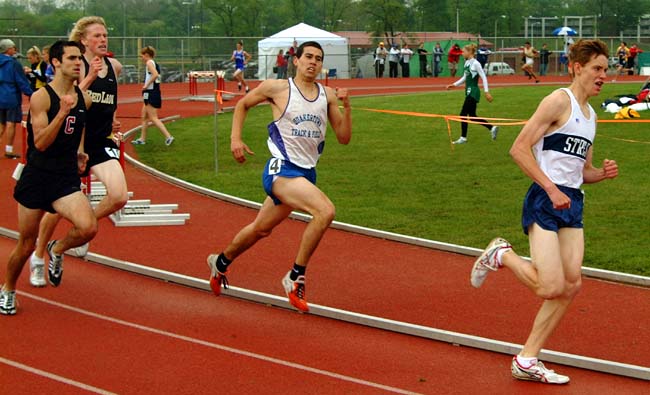 Before Manheim Township's Craig Miller set a new U.S. Freshman Class Record for 1600 meters on Saturday, May 24 at the PIAA State Championships, he followed his coaches guidance, raced when and how the plan was drawn up, and steadily progressed. But plans rarely ever go as smoothly as this one. Sometimes they go even better. The result was his 4:14.26, a time that smashed his season goal of 4:20. "This season exceeded my expectations by a lot," Miller understated. The mark broke a 19-year-old standard of 4:14.6 which was held by Mike Mundy, Mt. Vernon, Indiana.

Before this season, Craig's best mile was a 4:57 he ran while trying out for 8th grade soccer. This season, he began with a 4:40 in a dual meet, ran a few more in that range, and then at the Shippensburg Invitational April 19, from the slow heat because of his 4:40, posted a 4:30.13, good for 8th place. Twin brother Brad finished 6th in that race in 4:29.4. (Brad is out of action until late summer after a stress fracture developed into a fracture three weeks ago.)

Craig ran 4:33 at his last dual meet, and then uncorked a 4:19.5 at his Lebanon-Lancaster League Championship meet on May 10. In the Trials at States on Friday, he ran to ensure a top four finish to automatically advance to the finals, getting first in his heat with a 4:19.69, and 3rd best of the day.
Craig and his brother Brad are not new to fans of PA track & field. The two introduced themselves to the running community with first and 4th place finishes on September 7th at the Gettysburg Invitational. Then both medalled in AAA at the state XC Championships, Craig taking 5th in 16:26.9 and Brad, 11th in 16:39.6. For the story of their Gettysburg race, click here.

While not entirely surprised by Craig's national freshman record, Manheim Township XC Coach (and distance coach in the spring), Terry Lee, was very impressed. "I am so happy for him. He is obviously so blessed with talent, but he has everything else, too. He is so coachable, so responsive. And when you combine his work ethic with his character, he should be setting high goals."

Lee lets his charges set their own goals, and he thought the 4:20 "was lofty for a freshman." But his coaching philosophy is to include the athlete in their training and goal setting, and then to guide them to achieve their individual best. "It's Craig's responsibility to prepare to win, we just create the path by providing the physical and mental aspects of workouts to help them achieve their goals."

According to Craig, the race plan was conceived by Coach Lee to be run against the specific competition. They saw Adam Breisch, who won the race in 4:13.28, and Ryan Shaver, Coatesville, who was 2nd in 4:13.32, as the key competitors. "Mr. Lee told me that those two guys could go 50 for the quarter. I can only do 53, so I couldn’t be tied with them going into the final 400. The plan was to stay behind the leaders for two laps and then take it out on the third lap." (When you watch the PCN video, you can see Miller putting in a surge just after the 800). Miller held the lead until the final 100 meters, with Breisch the closest runner, furiously trying to catch him. In fact, Breisch had tried to pass Miller with 200 left, but Miller maintained position and forced Breisch to stay outside on the curve. The strategy almost worked. But in the final 40 meters, Breisch and Shaver pulled by. "I didn't feel too strong. My legs got tired. I started to slow down, but I gave it my all." In fact, Miller actually started his slowdown just before the finish, or he may have been in the 4:13's.

Lee knew Miller was ready after last Tuesday's workout. He generally has two plans for the day, and observes how the workout is progressing and adjusts accordingly. He noticed that Craig was handling the tough challenge well, and with one quarter rep left, asked him if he wanted to continue. There was no hesitation from Miller. "He has a vision of how he wants to race." Lee knew Craig was prepared for something special.

Lee says that Miller is competitive and has matured into being able to perform at this level. "He has the desire and he doesn't like to lose. He has brought his own personality and is starting to understand and become a student of the sport. It's the coach's job to be sensitive to the athlete's sites, and then prepare the way for them."

Lee believes that this is just the beginning for Craig (and Brad). "I don't know where this will go. With his national record, Craig is definitely on a path toward better performances."

When asked about comparisons to state 1600 record holder Paul Vandergrift (4:03.22), currently the girls' coach at Upper Dublin, Lee said that all the evidence points to that type of level. "It's a compliment."
And Miller received accolades from even his competitors. West Chester Henderson junior Craig Williams thanked Miller for taking it out on the third lap because he was afraid the race would be too slow. Williams finished 6th in 4:17.51. Lee says Miller knows he created the race for others, and that's fine with him.
As for Miller, he has a good idea of where he now fits. He thought he could go faster after his league race, but he just didn't have the chance to do it. He has already set goals for 2003-2004. "I'm hoping to win States in cross country and in the 1600 in Outdoor." But he already remembers that three juniors were ahead of him in XC, including Ian Fitzgerald of North Hills (2nd at Penn Relays 3000 in 8:30+) and Ian Gottesfeld of Henderson, the defending AAA state champ and Foot Locker finalist. The other is local competitor Brian Fuller of Cumberland Valley, who he has respected from the beginning of his freshman year.

"I guess I'm a runner now," he answered when asked about his love of a lot of sports, including swimming and basketball. "I'll still play basketball. But cross country and track are more important now."

The third lap, and it's Miller setting the pace. 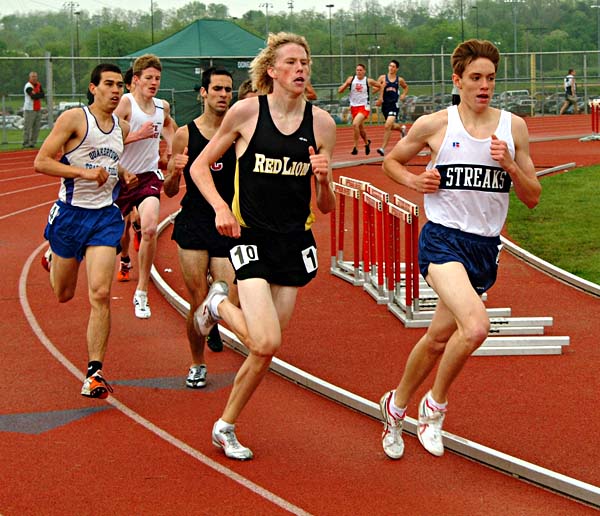