William & Mary junior, and 2010 Hampton PA grad Elaina Balouris earned six medals in high school in cross country (4-time qualifier), in the 3000m and in the 3200m. As a sophomore in college, she qualified for NCAA's in D1 in the 10000m, after narrowly missing a spot at NC's in cross country. She came back as a junior and won the CAA (Colonial Athletic Association) XC title, and then placed 13th at NC's, earning her first all-American certificate and leading her W&M team to 21st. 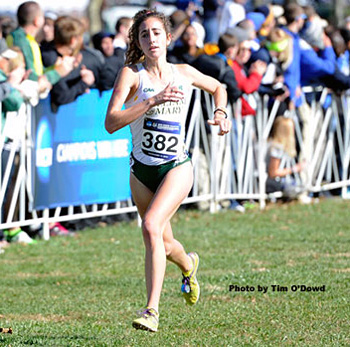 PT: How did you start in the sport? Other sports?
EB: I began by just going on family runs when I was younger and running some road races. After really enjoying it, I decided to run in middle school and then continue with it in high school. I tried many other sports too like soccer, basketball, and tennis but running was my favorite.

PT: At Hampton, you had a great career… six medals combined in xc, 3200 and 3000… four-time xc qualifier…Talk about how it prepared you for D1 competition
EB: High School running gave me experience running with some elite athletes at states in both track and cross country. This helped prepare me for the competitive college invitationals. Instead of being intimidated by the competition in collegiate races, I chose to embrace it.

PT: How did your event choices evolve? Have you been surprised by your progress in the longer races? Marathon some day?
EB: Over the years, my coaches and I realized that I tend to excel in the longer races. We started with the 5k freshmen year and then moved up to the 10k last year. I will probably continue to focus on the 10k this spring. The marathon could definitely be an option someday. I haven’t really thought a lot about it at the moment. 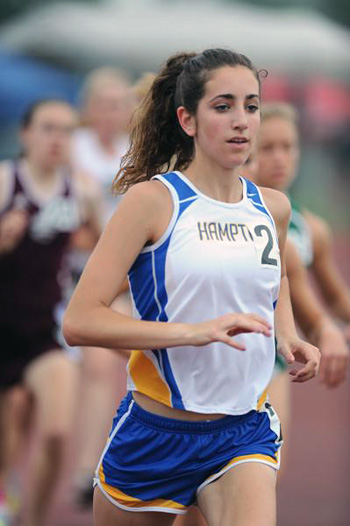 PT: How has your training changed from HS - how is it the same?
EB: I was very low mileage in high school, which I am incredibly thankful for, because I have been able to improve during my college years. With a combination of more mileage and a great training group, I have been able to do more intense workouts. We have a pack of about 5 girls that I work out with, which has helped me get through really difficult workouts. I am very lucky to have such motivated and hard working training partners!

PT: Did being the first alternate in 2011 motivate you for this year?
EB: Yes. I was not upset last year after regionals because I knew I put everything out there. I was disappointed that I didn’t qualify for NCAAs, but I used that as motivation. In fact, after regionals last year, we all started thinking about qualifying for nationals in 2012. We set, what we thought at the time, were far-fetched goals, but there is no point in setting goals that you already know you can reach. We accomplished our goal of making nationals this year!

PT: Talk about the season, from 20th at Pre-Nats, to dropping more than 30 seconds by Nats… from 7th at Regionals to beating all but the regional champ at Nats? What was the biggest difference between Pre-Nats and Nats?
EB: Since we were training through Pre-Nats, I wasn’t expecting to have a phenomenal race. We were training to run our best race in early November, and that is what we accomplished! It was a great way to practice the Louisville course though. The regional meet was pretty stressful because we were trying to qualify for NCAAs, so it wasn’t my best race individually. However, we made nationals and that was all that mattered. I was ready to get redemption in Louisville! 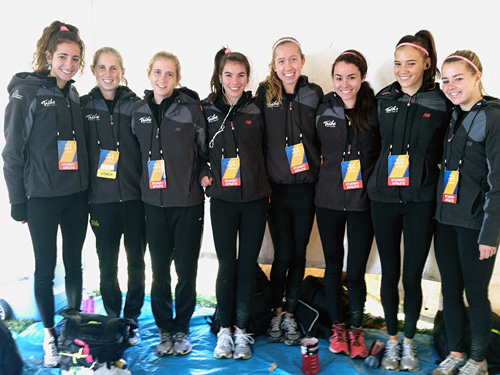 PT: Take us through your race. When did you realize it would be one of your better days?
EB: Before the race, my goal was to finish in the top 40 to receive All-American honors. I started visualizing the race the day our team qualified. I knew it would be a very unique race because of the concentration of elite runners. I imagined the chaos of being surrounded by hundreds of girls because I know how uncomfortable it feels when there are so many other racers all around you. So I was very mentally prepared for the race. When the race started, I was around 40th place at the mile, and I just continued to move up from there. I’ve also raced on this course three times before so I knew exactly where I wanted to be at each kilometer.

PT: What were you feeling during the final stretch when you realized what you were accomplishing?
EB: I was the happiest and most shocked I have ever been, and the adrenalin helped my pass a few people on the straightaway (which doesn’t happen very often!)

PT: What is biggest thing you've learned about yourself in the sport?
EB: I have learned that the most successful runners and people are those who have a lot of self-confidence.

PT: Did having a freshman near you help you this year?
EB: Of course! Emily has been an amazing teammate. She has helped Meghan McGovern, Jess Cygan, and I work harder than we thought we could. We are blessed to have such a great workout group. Also, seeing Emily in a race or coming down the final stretch with her is such a comforting feeling. We have a really great teammate connection and it eases the nerves having her on the team!

PT: It had been awhile since the W&M women had qualified. You only lose one from top seven next year. How has the team changed since you arrived? Nice to have other PA runners there?
EB: We have definitely come closer as a whole, especially by fusing the class boundaries. I think this was very important for us also because we had such a big and strong freshmen class this year. With so many new contributors to the team, doing more activities all together is a huge way to help not only with the transition from high school but with showing our team’s expectations as a student athlete. And it’s great having both Meghan McGovern and Emma Mahony on the team to represent PA with me!

PT: Long-term goals? What do you hope to do with your math degree?
EB: I am a math major, and I plan to attend graduate school to get my masters in education. I would like to be a teacher, (not sure what grade yet) as well as coach high school cross country and track. I plan to come back to the Pittsburgh area!

PT: Indoor and outdoor plans:
EB: I am training to run a fast 5k this indoor season! I haven’t raced yet. My first race will be in a few weeks. But most importantly, outdoor track is our first priority. My goal is to improve in the 10k.