Story and photos by Phil Grove 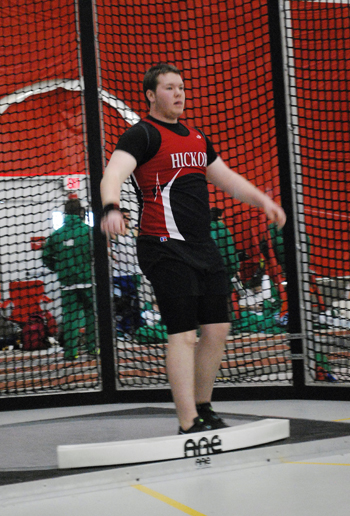 On a day when many in Pennsylvania were asking if a rodent saw its shadow – he didn’t, by the way – Hickory junior Luke Lewis stepped into the spotlight and cast a huge presence over a Tri-State Coaches meet that featured numerous PA top 10 performances.

Lewis’ opening effort with the 12-pound ball was good enough to win by almost 3 feet, but he was far from finished. He moved into the No. 2 spot in the state on his next effort and unleashed a new PA#1 bomb in round 6, a put of 59 feet, 1.5 inches that is also good for US#6.

“Yes and no,” Lewis said when asked if he has been surprised by his indoor success. “You work really, really hard so you want to hit that mark, but you don’t know if you will. When you hit it, it’s really, really nice.

“Last week I hit 60 feet (at Youngstown State), but I fouled it barely. This week I was coming back and hopefully get it out. I worked really hard this week.”

A year ago, Lewis toiled in the shadow of Matt Bell, who won state indoor and outdoor titles before grabbing gold at the New Balance Outdoor Nationals with a school-record heave of 61-7. Lewis finished his 2012 season in seventh at Shippensburg and was the only non-senior in the Class AA top 10. 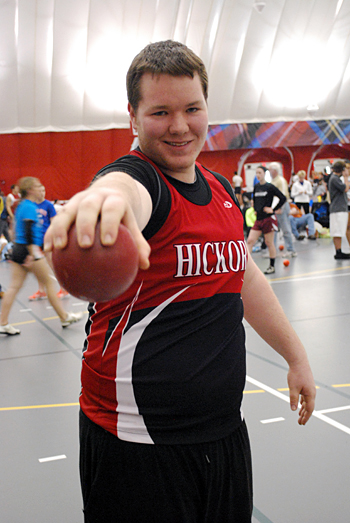 “Matt Bell was amazing,” Lewis said of his former teammate. “He was one of those people that would push you and push you. I worked my (rear end) off because of him just so I could beat him last year. This year, I just want to beat his record, of course.”

According to his coach, Lewis is closing in on 60 feet for two simple reasons – plenty of hard work and no fear of competition.
“He never quits,” Hickory throws coach Keith Woods said of his new top performer. “He is the first one to practice, he’s the last one to leave. I’ve spent many, many, many hours long past when everybody else left and he’s still working on something. He is a good worker. He does exactly what we have in line for him to do.

“And he excels toward his competition. He knew that Max (Adams of Hempfield Area) was going to throw really well, which he did. He just couldn’t stay in (the circle). (Luke) always is a gamer.”