Senior Tony Russell is two-for-two in major miles this indoor season, taking both the Yale Invite and New Balance Grand Prix. This is his first Millrose Mile invitation. 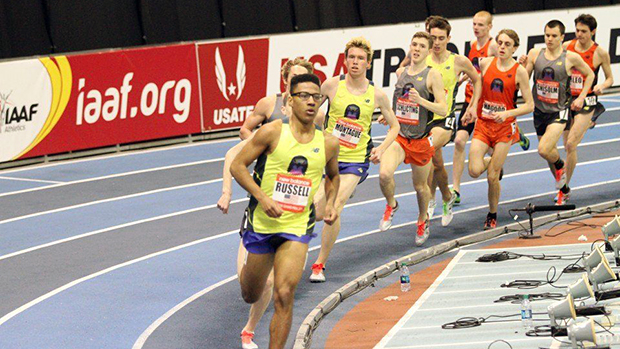 PennTrackXC - Congrats on two big time wins in the mile this indoor season!  What have you taken away from each race (Yale and the Grand Prix)?

TR - I learned a lot from Yale and the Grand Prix, I've gained so much confidence in my racing ability and I'm continuing to learn more about my limits and strengths as i push my boundaries.

PennTrackXC - The Grand Prix was certainly a breakthrough, with a huge PR, indoors or outdoors.  What has made the difference this year to produce such great times?

TR - I would say that the biggest reason for my recent success is from mentally maturing more than physically maturing. I go into races with a strong mindset and an ability to find out what i need to do mid-race in order to win.

PennTrackXC - What are your expectations for yourself entering the Millrose Games mile?

TR - Im trying not to put too many expectations on myself for Millrose, or any other meet for that matter. What i do know is that I want to run fast. Hopefully the race goes out fast in the first 400, I want to break 4:10 indoors and this is one of the best chances i have to do it indoors.

PennTrackXC - With such a great season so far what goals do you have for the PA state championships?

TR - My goal for states is really just to win the mile and then come back and help my team in whatever relay we choose to do.

PennTrackXC - Describe your favorite winter workout and why you like it?

TR - My favorite winter workout would have to be a hill on Ashbridge Road near Henderson. It's steep and I usually have great workouts there.

TR - The best thing about indoor is that I can lead a race and not have to worry about wind resistance. I haven't raced against anyone yet who likes as fast of a starting pace as i do yet so i usually end up leading every race i'm in. I've learned to make that my advantage instead of disadvantage.

TR - The worst thing about indoor is that all of the snow hurts my training a bit. All of my runs are on the road now because there isn't anywhere else to go. I also don't like the cold too much.

PennTrackXC - What is the most exciting thing you have experienced on the track this season?

TR - The most exciting thing I've experienced on the track was definitely the Grand Prix, the atmosphere was wild and meeting the mayor of Boston on the track after my race and getting my flowers was such a crazy thing to have done.

PennTrackXC - What is the most exciting off-track experience you have had this season?

TR - The most exciting off track experience would probably be seeing my dad talking to Olympic silver medalist Nick Willis while he was at the bar inside the hotel all of the junior milers and Pro Athletes were staying in, that on top of meeting Rupp for the third time, and Mary Cain for the second. It never gets old.