PennTrackXC will broadcast the entire PTFCA State Championships. The entire webcast and all archived video will be available to MileSplit Insider members. To watch the webcast login here (https://pa.milesplit.com/articles/121461-live-webcast-ptfca-indoor-state-championships-on-milesplit). If you're not yet a member of Milesplit Insider, you can sign up on that page. And follow along on Twitter @PennTrackXC. 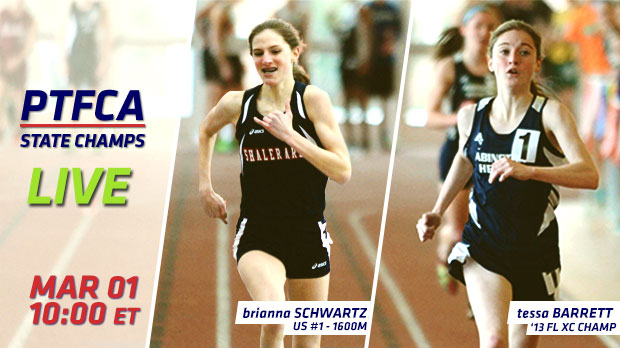 Here we are, just a few days shy of the 2014 PTFCA Indoor Championships, and there is a lot to be excited about.  For starters, the meet will be live streamed on MileSplit for the first time ever!  And of course there are many events where very fast times will be necessary to prevail.

We break the girls action down by event and give you our best guess as to who will win each event and why.  Enjoy the read, but most importantly, enjoy the meet LIVE right here.

Ok, so what records are going down?  We want to know!

In the Mile run, junior Brianna Schwartz, Shaler Area, has already gone under the record this year with a converted 4:43.74.  The former PA record and current meet record of 4:44.20 belonged to Angel Piccirillo, Homer Center.  With a talented field behind her the race could come close to 4:40, making for a very epic race to watch live.  She will have quite the challenge from Georgetown commit Kennedy Weisner, Elk County Catholic, who is rounding into fantastic shape with a PR of 4:48.16.  The other challenger will be sophomore Mady Clahane, Cumberland Valley, with a PR of 4:49.17.  Also in the mix will be Marissa Sheva, Pennridge, who has a indoor PR of 4:56.94.  But make no mistake about it, Sheva has the talent to win a close race as she is the defending champion in the event.  This race could result in 4 runners crashing the 4:50 barrier and most likely even lower!

Another record that will likely be shattered is in the 3000 meter run.  Defending champ Tessa Barrett, Abington Heights, ran under her own record of 9:47.73 at the Susquehanna Indoor Classic with a clocking of 9:45.77, and that was solo while lapping the field.  This time she’ll have company, but I think that will be a mere formality in this one.  Barrett is capable of running in the low 9:30’s and it is possible that a few more might follow her under the record as well.  Regan Rome, Dallas, has gone 10:01.87 this year and can certainly show up big on race day having run 9:53.59 at this race in 2013, finishing 3rd.  Mary Malone, North Hills, has a PR of 10:07.56 and will be in the hunt as well.  Courtney Smith, Unionville, with a season-best of 10:09.36, can also race well in big meets so expect her to be up in the mix.  Let’s not forget that she went under the then-state record last year and lost to Barrett by less than a second in9:48.24.  She also beat Barrett outdoors at the Penn Relays 3000 and the PIAA state championships in the 3200.  Paige Stoner, Pottsville, is the next closest with a PR of 10:19.82 and could hook on for a ride to a great time. Missing from the competition will be Saucon Valley senior Elizabeth Chikotas who owns a 10:14.21 this season. She'll be in the pool at the District 11 swimming championships trying to help her teammates.

The final state record going down will be in the 4x800 meter relay mark set by Strath Haven in 2011 at 9:08.57… despite the big gap between the state record and the performance list (9 seconds).  The current meet record is 9:11.48 set by Hatboro-Horsham back in 2004 and is within easier reach.  Strath Haven coach Bill Coren informed me that the top three teams in the race will be fresh, and in PA that means ridiculously fast times in the 3200m relay, and this one should be close and exciting as well.  Central Bucks South leads the state with a time of 9:17.44 but Strath Haven lurks with a clocking of 9:19.93.  Defending champ Great Valley will also be right there in the hunt with a qualifying time of 9:24.97.

That’s not all!  Check out these bubble records that could go down as well.

In the High Jump Cyre Virgo, Fleetwood Area, has gone 6-1 outdoors and has also flirted a few times with the 6’ barrier, winning state last year and a national title in doing so.  This year she has gone 5-08, but don’t let that fool you as she shows up big when everything is on the line.  The record to beat is held by Olympic heptathlon medalist Hyleas Fountain at 6’ even, set back in 1999.  Megan McCloskey, Germantown Academy, has also gone 5-08 this year, though she has never gone much higher so it will be difficult to take down Virgo.  Others in the hunt for a top three finish are Claudine Andre, Upper Darby, 5-07, and Shannon Taub, Council Rock South, 5-06.

The other bubble event is the Distance Medley Relay, where the meet record time to beat is 12:04.79 set in 2012 by the Academy of Notre Dame. (Their 11:48.30 state record from 2012 run at NB Nationals, appears out of reach.) Cardinal O’Hara, leads the field with a time of 12:15.91, but the competition usually pushes the times faster on the swift PSU track.  Challenging O’Hara is a talented Springside Chestnut Hill Academy squad who have gone 12:18.92 this year and Unionville, with a 12:24.71 clocking, anchored by senior Courtney Smith.  Though winning is unlikely, Abington Heights is seeded 5th but has the wild card of Tessa Barrett at anchor, and with a great leg could propel them to a top finish.  Let’s just see how she and Smith bounce back from the 3k.

But it’s not all about records.  We are talking state titles here!
There will be great battles for gold in many other events!

In the girls 800 meter run Brianna Schwartz, Shaler Area, will be doubling back from the mile, but she has a best of 2:10.77 and also the speed to close out her second state title if the race should be closer than the times suggest.  Kennedy Weisner, Elk County Catholic, will be looking for a title here as well as in the mile, and she is certainly running well enough to grab the 800 with a season best time of 2:12.14.  A few other top athletes vying for medals include Claire Brown, Villa Maria Academy, 2:14.78, Maddie Villalba, Central Bucks West, 2:15.19, and Terri Turner, Springside, 2:15.44

In the 200 meter dash Katelyn Jackson, Cheltenham, 24.43, is the defending champion in the event.  Again, she is the class of the field and should take the win with ease.  The battle behind her isn’t quite so easy to determine and includes some very fast talent.  Dasia Pressley, Neshaminy, has a time of 24.76 and 400m favorite Brooklyn Broadwater, Springside, has clocked 24.82.  Taylor Chapman, Pennridge, 24.87, and freshman Chanel Brissett, Cheltenham, 25.06, round out the other top competitors.

Brooklyn Broadwater, Springside, 57.67, and Hanna Brosky, Emmaus, 57.67, share the top seed in the 400 meter dash and the battle should be rather intense between the two to gain the advantage on a tight banked track.  It should be a very exciting race to see.  Jamila Branch, Central Bucks West, 58.27, Khayla Williams, Upper Darby, 58.36, Ashli Cook, Upper Darby, 58.39, and Quadisha Newkirk, Paul Robeson, 58.54, will all be battling for the final medal spots in this one.

The 60 meter hurdles should be a close affair as the top two have consistently close times.  Ciara Leonard, Cheltenham, has a 8.57 best but has been in the 8.70’s lately.  Sierra Brabham-Lawrence, Harrisburg, has an 8.65 clocking that came more recently. This is her first indoor season, and the PTFCA Carnival was her first crack at the 60. She had run the 55 at Dickinson in January.  Maddie Holmberg, Hempfield, 8.77, and Markeeta Thomas, Paul Robeson, 8.86, will also be right in there battling.  Other favorites to earn medals are Kat Quigley, Pine-Richland, 8.98, and Aspen Gaita, Sroudsburg, 9.01.  Of course all of this is dependent on making the final, not to be taken lightly at the PA indoor meet.

In the 60 meter dash Katelyn Jackson, Cheltenham, was the runner-up last year and is coming into this one in fine form with a 7.57 state best.  But watch for the challenge from frosh teammate Chanel Brissett who comes in with a blazing 7.60 clocking this year.  The battle for the medals will be close as always with a host of runners under the 7.80 mark.  Taylor Chapman, Pennridge, 7.67, Taylor McCorkle, Oakland Catholic, 7.67, Haley Crawford, State College, 7.74, Jasmine Jones, Hempfield, 7.76, and Dasia Pressley, Neshaminy, 7.79.  Just like the 60m all of this is dependent on making the final, not to be taken lightly at the PA indoor meet.

Bridget Guy, Hempfield, was 3rd last year in the pole vault and looks to be vaulting good enough to win the event this year with a state best of 12-03.  Of course any misstep can be taken advantage of and there are three vaulters close behind her.  Kennedy Shank, Northern, has a best of 12-01.75 this year, Courtney McQuaide, Greensburg, has gone 12-00, and Kaitlyn Toman, Salisbury, has also cleared 12-00.

The Long Jump is missing Holly Sullivan, Owen J. Roberts, who injured her hamstring at the Track Classic and will be out of this one.  But defending champ Claudine Andre, Upper Darby, is in the field and came up big when it mattered last year.  She has a narrow advantage entering the meet with a state best mark of 18-05.75.  She will have some challengers to her title defense with Maddie Holmberg, Hempfield, sitting at 18-05.50, Julia Reeves, Springside, in at 18-04.50, and Ariana Przybylowski, Pennridge, having gone 18-03.75.

The Shot Put is also missing a top athlete as defending champion Emily Stauffer, Cocalico, injured her right arm and will not compete.  This leaves Courtney McCartney, Selinsgrove, with a great chance of winning as she has two feet on the field with a state best mark of 44-02.  Battling for a top three finish will be Emily Campbell, Slippery Rock, 42-02, Elena Marchand, Hickory, 42-01, and Macey Tanseco, Perkiomen Valley, 41-11.50.

The Triple Jump will be a close battle at the front with Uchechi Onuoha, Pennsbury, leading the way with her state best 38-04.25.  Shannon Taub, Council Rock South, 37-04 and Alexandra Heuer, Boyertown, 36-11.25 will also be competing for the win.