PennTrackXC will broadcast the entire PTFCA State Championships. The entire webcast and all archived video will be available to MileSplit Insider members. To watch the webcast login here (http://pa.milesplit.com/articles/121461-live-webcast-ptfca-indoor-state-championships-on-milesplit). If you're not yet a member of Milesplit Insider, you can sign up on that page. And follow along on Twitter @PennTrackXC. 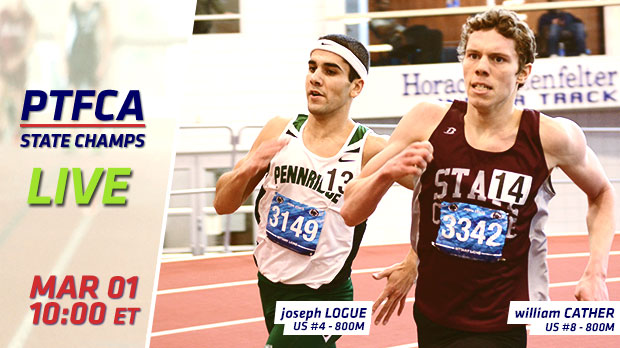 We have reached the grand finale of the 2014 Pennsylvania indoor season and the boys side of the competition may be the most competitive we have ever seen. Several events are too close to call, while other events have the potential to be special.

The event that will steal much of the pre meet talk will be the 800 meter run. Currently, the top four in PA are in the top ten in the country! 2013 4th place finisher Joey Logue of Pennridge has the fastest time this season, running 1:53.67 to win the Kevin Dare Invitational over 7th place medalist Will Cather of State College. Kyle Francis of Bensalem edged out 2013 state bronze medalist Jeff Wiseman of Council Rock South at the TFCAofGP Last Chance Meet for a win, with both runners breaking 1:54 on a flat track. All four runners will be looking for their 1st career individual state gold medal. With the incredible talent of these four athletes, it is anyone’s race for the taking.

Meanwhile, the one mile and the 3000 meter runs have heavy favorites leading the way. Tony Russell of West Chester Henderson has been the best miler in PA all season, and he spent part of the season as the best miler in the country. Big wins at Yale and Boston have shown that he is ready for the spotlight of the state championships. While he may be the favorite and the runner up in 2013, the chase pack of sophomore Jaxson Hoey of Malvern Prep, Brendan Bilotta of Lasalle and Ross Wilson of Council Rock North will make Russell earn that individual state championship.

The 3000 meter run features Colin Martin of Fox Chapel Area. The senior and 2013 7th place finisher has been on fire as of late, recently running a 9:13.95 for 3200 meters in Ohio, which is US#14. Martin can potentially break 8:30, which has only happened twice at the indoor state championships. Dominic Deluca of Dallas is the state leader in the 3000 meter run (8:44.63) and will look to cause an upset along with Christian Kardish of Holy Ghost Prep.

Brissett will be challenged in the 60 meter dash by new state leader James Biggs-Frazier of Penn Charter. Biggs-Frazier defeated Brissett at the Meet of Champions last Saturday. Will lightning strike twice for the Penn Charter senior or will Brissett or previous state leader and 2013 6th place medalist Dreux Stamford of Altoona beat him to the title? Brissett will contend with Stuart Tweedie of Westtown, Tyler Whitmore of Upper Moreland, and Charles Snorweah of Pennsbury in the 200 meter dash. Tweedie earned the top seed with a big performance at the TFCAofGP Meet of Champions, but will have his hands full against experienced state sprinters like Snorweah and 2013 silver medalist Whitmore. Snorweah has the fastest time of the season, while Whitmore has been medaling in state competitions since his sophomore season.

Snorweah will be a big favorite in the 400 meter dash against Cheltenham’s John Lewis. Snorweah, a 5th place finisher in 2013, holds the only sub 49 second performance of the season (48.85) while Lewis is the only other sub 50 second runner in 2014. Ishmael Wright of Quakertown and Eric Jones of Neumann Goretti have come on strong in the past couple of weeks and will challenge the favorites for the championship.

The 60 meter hurdles has been about two athletes all season. Donaldo Benjamin of Delaware Valley Charter spent most of the first two months of the season in the state lead. In the past few weeks, his spot has been overtaken by Matthew Bernadowski of Elizabeth Forward. Bernadowski broke the 8 second barrier en route to victory at the TSTCA Championships (7.98). Benjamin is also coming off a championship victory and will look to keep his unbeaten streak alive. Looking to spoil the one on one dual will be Mitch Valko of South Fayette. Valko finished 2nd to Bernadowski at the TSTCA finals, running a PA#2 8.04 in the prelim rounds. With the margin for error so small, whomever runs the cleanest race may come away with the championship.

The sprint relays will be very close to call at the top. Cheltenham has been the top 4x200 meter relay team in the state since the start of the season, but the competition is right on their heels. Delaware Valley Charter may not have earned a win against Cheltenham this season, but they have challenged them every step of the way and will be there once again to challenge at states. Pennsbury have a couple legs that earned All American certificates in this event last year that will make them a big factor on Saturday. North Penn and Neumann Goretti have the capability of taking advantage of any mistake anyone else makes in the race and snagging the title for themselves.

The 4x400 meter relay may be the 1st time since 2011 that the team title will be decided in the final event with the top two teams going head to head in the final heat. Cheltenham and Pennsbury have the potential to do just that, but will have to overcome defending champions Pennridge, who have found their groove in the past couple of weeks in the 4x400. All three teams have broken 3:24 this season and are ready to dip under 3:20 to become champions.

In the distance relays, records are the name of the game. The 4x800 meter relay record is in jeopardy after both Cardinal O’Hara (7:50.98) and State College (7:47.75) put on some impressive performances in New York in the middle of February. State College has the anchor leg in Cather (1:54.05) and three other legs that have all run 1:57 this winter. Cardinal O’Hara has a team full of runners with national level experience and incredible strength and endurance that helps build their speed for this relay event. State College may have the home track advantage, but will experience on the big state prevail?

West Chester Henderson has already bettered the state meet record in the distance medley relay, running 10:15.54 at the New Jersey Varsity Classic on February 4. The squad showed their depth a few days later, running 10:27.53 in Boston without Tony Russell. Although Russell has been the best miler this season, defending champions Lasalle, Holy Ghost Prep, and Lower Dauphin also have big time anchor legs who can have a lot to say in how the outcome of the meet plays out. Should Henderson get a big lead, it can be a race against the clock and Lasalle’s 2008 meet record of 10:15.89. The state record of 10:10.80 from O’Hara in 2004 may be within reach.

Out of the five field events that will be on display, only one has an overwhelming favorite. Luke Lewis of Hickory has led the state in the shot put since early January and he has not looked back. His season best of 62-3 is one of five performance of 60 feet or better this winter. Max Adams of Hempfield (7) has been the closest to touching 60 feet (59-8.50) while Morgan Shigo of Fleetwood has the potential to get to that mark (58-4 in 2014). If Lewis gets ahead early, the rest of the competition may focus on how far he can throw instead of who can catch him for the win.

As for the other field events, the margins for error will be very small. In the long jump, there have been three new state leaders in the past ten days, with two of them clearing 23 feet. Prior to February 16, no one had broken the 23 foot mark. Last year’s 4th place finisher Isaiah Brooks of Woodland Hills has soared to the top of the state with a big mark of 23-9.25 at the TSTCA Championships, and he has improved his mark in every competition he has entered in 2014. Jordan Bryan of St Joe’s Prep won the PCL Championship with a mark of 23-1.25, the first PA athlete to break 23 feet. Prior to that, Plymouth Whitemarsh’s Byron Coleman had the state lead for 24 hours with his PTFCA Carnival winning 22-11.75 mark. Coleman was 6th at the state meet a year ago and will look to improve on that finish. Every year, the long jump gives us plenty of surprises and top marks, and 2014 will certainly be no different.

All was quiet in triple jump land until the TFCAofGP Meet of Champions last Saturday when Episcopal Academy’s Sam Pope popped a huge 47-8 performance to win the event. Prior to Saturday, his personal best was 43-10.50 on February 8. Can he find a big jump that leads him to the state championship? Out to chase the new kid on the block will be the 2013 silver medalist, Upper Darby’s Cecil Simpson (46-3), who had been the state leader since the 30th of December. The senior will hope to find his form on Saturday. Walt Pegues of Central and Neshaminy’s D’Andre Pollard have marks of 45-8 and will be ready to take advantage should anyone at the top slip up.

Sometimes being the top seed in an event is not all it is cooked up to be. Don’t believe it? Just ask the top seeds in the boys pole vault the past three years. Since 2011, the top seed has either no heighted or needed their 3rd attempt to clear their first height of the competition. The two vaulters who look to change history are Ryan Wilkes of Valley View and Chris Stone of Springfield Montco. Wilkes has spent more time at the top of the list than Stone, but Stone has improved his mark in the past couple of meets, giving him plenty of momentum heading into Saturday. Nick Anderson of Kane Area was 4th in 2013 and will challenge the duo at the top for the championship. George Donahey of Mifflin County has cleared 14-7 this season and will like to have a huge performance at the biggest meet of his career.

Last but not least, the high jump will also have Chris Stone leading the way as one of three athletes to clear 6-8 this season. Tyree Ballinger of J.P. McCaskey and Alex McCord of Warwick are members of the 6-8 club. Ballinger finished 7th in 2013 and is the only returning medalist in the field. Out to challenge these top jumpers are Tra-C Davis of Coatesville and Randall Johnson of Central Bucks South. The two of them have gone head to head on several occasions this seasons and both have been at or close to 6-7 in most competitions.