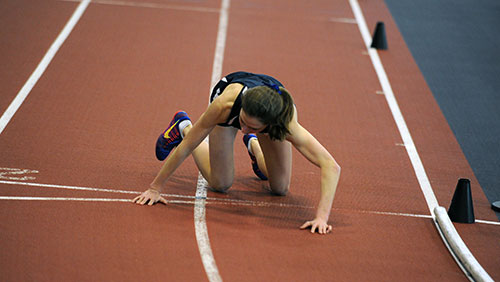 CLICK ON THE LINKS ABOVE TO SEE THE RACE 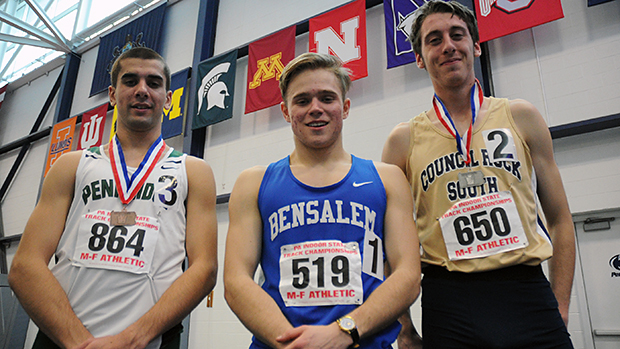 Splits: If you'd like to add your's for any event, email Gayle 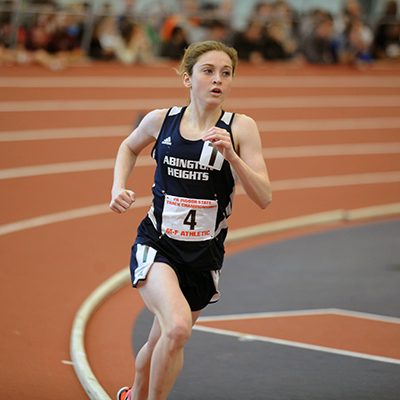 Newspaper Coverage from across PA (email Gayle with your link)

Brianna Schwartz of Shaler and Kennedy Weisner of Elk County Catholic put on a show in the mile. After Weisner paced the race, Schwartz took over in the final two laps. As she was cruising to the state record, she collapsed in front of the finish line before crawling across the line to clinch another all-time state record. Schwartz’s time of 4:42.58 bettered her 4:43.74 from February 15 and is US#3. Kennedy had to settle for 2nd. Tessa Barrett of Abington Heights also performed the expected, taking the lead from the gun in the 3000 meter run to break her own all time state record she set in January with a time of 9:36.45, good for US#2! The surprise of the day in the distance events came in the 800 meter run, where Liz McGroarty of Garnet Valley won the state title out of the unseeded heat with a time of 2:14.22.

In the sprints, Cheltenham girls went 1-2 in the 60 meter dash, with Katelyn Jackson running 7.61 for 1st and Chanel Brissett running 7.62 for 2nd. Sierra Brabhim-Lawrence of Harrisburg struck gold in her first indoor state meet in the 60 meter hurdles, edging out Ciara Leonard of Cheltenham with a state meet record tying time of 8.45 to tie for US#3! Leonard’s 8.46 is US#5. Dasia Pressley of Neshaminy put her name on the map with a gold medal in the 200 meter dash with a US#5 time of 24.42! Brooklynn Broadwater of Springside Chestnut Hill was the aggressor in the 400 meter dash and was rewarded for her bravery with a gold medal performance of 56.22.

In the relays, Strath Haven now possess the all-time state record and the state meet record in the 4x800 meter relay. The senior combination of Allie Wilson and Kristin Miller led an inspiring comeback in the final two legs to break the ten year old meet record with a US#3 9:09.52! Unionville took the lead late in the first leg of the distance medley relay and never looked back as they won the DMR with a US#6 12:09.22. The sprint relays belonged to Paul Robeson, as they took both the 4x200 and 4x400 meter relays. In the 4x200, they ran 1:42.55 to earn the gold and they capped off the day with a win in a classic 4x400 meter relay in 3:54.03 to stay at US#11.

In the field events, Courtney McCartney of Selinsgrove took home the girls shot put title with a seasonal best 45-7.25. Uchechi Onuoha of Pennsbury made it two triple jump wins in 8 days, taking home the triple jump title with a mark of 38-1.50. Megan McCloskey of Germantown Academy earned another gold medal at the indoor state meet in the high jump with a clearance of 5-6. Courtney McQuaide of Greensburg Salem cleared 12 feet to win the pole vault title. The big story in the field was Maddie Holmberg’s win in the long jump, as it inspired a big performance from her team. Maddie won the long jump with a state leading 18-10.75!

Her performances charged her team to a narrow victory in the team championship race 37-36 over Paul Robeson. Cheltenham finished 3rd with 32 points followed by Pennridge with 25 points and Upper Darby with 24.5 points.

The 800 meter run was the featured event of the afternoon and it did not disappoint! Kyle Francis of Bensalem charged to the front of the pack from the gun and held off the entire field on his way to the PA all time state record and US#1 time of 1:50.55! Jeff Wiseman of Council Rock South finished 2nd in 1:51.36, which is US#2 and PA#3 All Time and Joey Logue of Pennridge finished 3rd in 1:52.02 to earn US#3 honors! Tony Russell of West Chester Henderson took care of business in winning the mile with a time of 4:12.65! His time was just. 04 seconds off the meet record from 2007. In the 3000 meter run, Colin Martin of Fox Chapel made his move in the final 400 meters to win the state title in a US#5 8:30.82.

In the sprints, Christian Brissett of Cheltenham edged out a very game Xavier Smith of Daniel Boone to win the 60 meter dash. Both runners were credited with 6.86 performances to tie for the state lead. Brissett’s teammate John Lewis won the 400 meter dash with a US#4 48.34 to edge out US#8 Charles Snorweah of Pennsbury (48.54). In the 200 meter dash, Stuart Tweedie of Westtown put his name on the map in the 200 meter dash with a state leading and US#10 21.78! In the hurdles, after running one hurdles event all season, Montae Nicholson of Gateway ran a strong final round to win the state title with a US#3 time of 7.85!

In the relays, West Chester Henderson used a 3:08 split from Tony Russell in the 1200 meter lead off leg to cruise to the distance medley state title in 10:24.16! State College had a strong 2nd leg from Chris Golembeski to take home the state title in the 4x800 meter relay in 7:50.72. In the sprint relays, Delaware Valley Charter edged out Cheltenham to win the 4x200 meter relay in a T-US#5 time of 1:29.05! Cheltenham got their redemption in the 4x400 meter relay that sealed the team title with a winning time of 3:20.79, good for US#7. Cheltenham scored 46 points to win by 20 over Cardinal O’Hara. Springfield Monto scored 23 points for 3rd place.

In the field events, the shock of the day was PA#1 and US#8 Luke Lewis of Hickory fouled all three throws in the shot put, which opened the door for Max Adams of Hempfield (7) to take the gold medal with a mark of 59-5.25. Isaiah Brooks of Woodland Hills did hold form in the long jump, proving his worth of the top seed with a state title winning mark of 23-5. Craig Stevens of Pottsville soared to the state title in the triple jump with a nearly four foot personal best mark of 48 feet even, good for US#13! But the star of the field events belonged to Chris Stone of Springfield Montco. The junior won the pole vault with a clearance of 15 feet and then followed that up with a win in the high jump with a clearance of 6-8!

Brianna Schwartz brought out the oohs and aahs from a packed house Saturday at the Ashenfelter Center. And that was just the final 10 yards of a record-breaking girls’ mile.

Whether it was feet first or head first, Chris Stone had no equals at clearing the bar Saturday at the Ashenfelter Center.

She had been there before but was never this fast.

Tessa Barrett added another record-breaking feather in her cap Saturday, defending her indoor state 3,000-meter run title with a US#2 clocking and an all-time state record.

Sierra Brabham-Lawrence and Montae Nicholson were on missions Saturday.

And whether it was restoring a little school pride or simply giving your best, their gold-medal performances showed that they definitely hit their targets.

Running from the front has become Kyle Francis’ calling card.

Saturday on the 200-meter banked oval at Penn State, the senior from Bensalem parlayed being in the lead into a wire-to-wire victory and an all-time state record in the nation’s fastest 800 meters this year.

You can write this one in indelible marker – consistency pays big dividends in the long run.

Maddie Holmberg and Isaiah Brooks needed something a little less permanent Saturday, and one big jump marked down in pencil was just what the track doctor ordered for both.