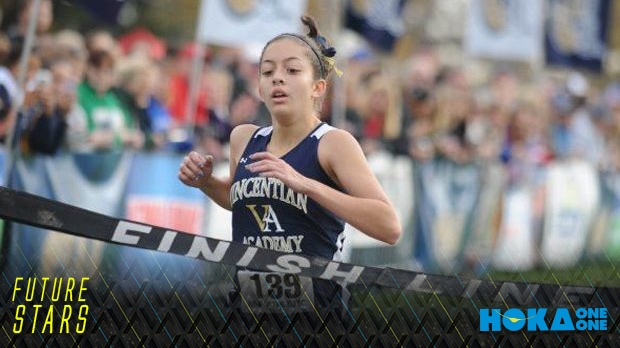 As part of the Hoka One Future Stars program, MileSplit is highlighting some of the top underclass cross country runners throughout the country. Our next profile will feature sophomore Marianne Abdalah of Vincentian Academy. Abdalah is the 2013 Class A cross country state champion and is the 2014 AA outdoor 3200 meter silver medalist. Abdalah has 4 career cross country victories and three 2nd place XC finishes. She also has a 4:58 personal best for 1600 meters and a 10:45 personal best for 3200 meters. Abdalah talks to PennTrackXC about her first year and about her upbringing in the sport.

Tell us how you got started with competitive running

I began my running career when I was just 7 years old. My parents were both runners and they decided to instill it in us for our health and well-being. My early running career had a bit of a rocky start. However, gradually, as I continued to pursue running and receive a competitive drive, I began to like it more and more. I started with meets for my elementary school, with my coach being my mom. Then, I moved on to a more competitive league, the Amateur Athletic Union (AAU). I received an 8th place medal in the 1500 at age 9 in this league, but later, the league became less competitive and the competition sort of fizzled out. I then moved to United States Track and Field (USATF), in which I still occasionally run it today. From there, I focused on middle school running and now high school!

What were some of your expectations heading into your first season?

I honestly did not have a lot of expectations, so to speak, going into my high school career. Being a freshman, I just wanted to really feel out the competition and test out each of the courses, being that they all were new to me. Eventually though, as I saw where I stood among the high school crowd, I began to look for that state medal. After I received the state medal, I looked to take the National title for the USATF Championships in San Antonio, Texas. I sought this title, because the year before I was runner-up and you only have so many chances to be a National title holder. Basically, my freshman career was a trial and error for years to come. I set my expectations as I went.

Talk about the one race that gave you the belief that you could be really good at running.

The race that I felt like gave me the belief that I could be really good at running was the USATF Track and Field National Championships, when I was just 9 years old. It was one of the biggest meets that I had ever competed in at the time and by far it was the most thrilling. I remember being in the second heat of the girls age 9 1500 meter race and knowing that I had to win in order to medal. My competitive drive came out and I pushed for the win. Not only was being in front exciting, but the fact that my picture was on the jumbo tron and that my name was being announced across the stadium by the commentator was even more thrilling. I watched the final heat and I wasn't sure of my place. When they finally called my name to come up to the podium, I was elated. Before this moment, running was more of a hobby for my health and well-being. However, when I got the taste of what receiving a medal was like, I craved more. After that moment, I knew that this was just the beginning of a running career yet to come.

Which season do you enjoy the most (cross country, indoor, outdoor) and why?

I prefer cross country season, because every course is different. I would say that the scenery is much better, since you know all you see when you go around a track is bleachers, lights, and more track. Also, cross country has hills, which unlike most, I tend to like.

Which cross country course is your favorite and why?

I would have to say that the Red, White, and Blue cross country course at Baldwin is my favorite. It is one of the faster courses and I enjoy the first mile of downhill as well as the 3/4 of a mile track-like finish around the oval. There are still some challenging hills in the second mile to make the course a mix of both flat and hilly. This combination makes it one of my all-time favorites.

Which track event is your favorite and why?

My favorite track event has to be the 3200. I know that many people question the shear fact that someone can enjoy an eight lap race, but I do. It allows for a consistent pace the whole way through, as well as time for strategizing while running. I mean who couldn't beat running under the lights at some of the longer meets!

All of my coaches, including my parents, have helped me gradually improve from the time I was little to now. They never gave me more than I could handle at the time, but gradually are increasing my difficulty. They helped me to not burn out and to keep everything in perspective. The sport was kept fun throughout my years of running simply by the company that it kept. I have made so many lifelong friends through the sport and I am truly grateful for that. However, my coaches have made it fun by trying to incorporate some running games in middle school, some team bonding experiences in high school, and simply by my coaches just cracking jokes and not being serious all the time. They took the pressure off of me by always staying positive no matter what and telling me to do the best that I could do on that day. Over all of my years, they have helped me to learn that one race does not define you, just by their attitude.

What is your interaction like with your teammates since your early success?

I have always had great relationships with my teammates. From the time I was little, most of my teammates have been really good friends. I've always tried to be a leader type figure and attempted to help everyone reach their full potentials. I try to keep a positive outlook and influence my team in a positive way.

How do you plan on tackling the expectations placed on you this season?

I plan on taking this season one step at a time, just like freshman year. I know that there are a lot of expectations placed on me, because I am a returning state champion, but I am not going to let those expectations get the best of me. I plan on focusing on one race at a time and whatever I do on that day I do. As I said before, one race cannot define you. Instead, it should fire you up to come back even stronger.

Well, my first goal was to try to win Red, White, and Blue, but the heat got the best of me that day and I was unable to finish. However, this is just the beginning of the season, and I plan on only doing better things from here. I really would like to improve my personal best of 17:49, as well as just improve my times from all of the courses I ran last year. I would also like to attempt to win the PIAA Class A State Championships again. Unlike last year, I would like to try to go to the Foot Locker Nationals.